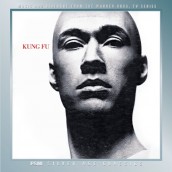 It’s finally time to snatch a pebble out of Film Score Monthly’s hand with this soundtrack two-fer, which combines music from two poetically different scores for men seeking their way in the American outback.

The first traveler just happens to be everyone’s favorite Shaolin fugitive monk Cain, whose mystical tête-à-têtes with his teachers are front and center through much of KUNG FU. Though designed as a concept album in 1973 by composer Jim Helms, some score purists might take umbrage to so much dialogue on an FSM release. Yet it’s almost hard to imagine Helms’ harmonies without the Confucianisms, the music’s lilting harpsichords, flutes and Oriental percussion flitting about the dialogue with the delicacy of hummingbird wings.

There are notable instrumental tracks as well for the first CD release of KUNG FU, with Helms’ majestic east meets western music belying a show whose noble thoughts would usually end in an ass kicking. Yet Helms was essential to making KUNG FU TV’s most thoughtful, and mystically underscored attempt at bringing the true philosophy of the martial arts to a mass audience.

Composer Johnny Harris also finally gets his digital due for 1971’s MAN IN THE WILDERNESS. While he scored such cult TV favorites as BUCK ROGERS and WONDER WOMAN, Harris delivered one of the great manly adventure movie themes here, as A MAN CALLED HORSE star Richard Harris once again endured to the tortuous extremes of the outdoors as a left-for-dead mountain man.

Using his MAN theme in permutations that range from charging brass to lush strings and the bells of a music box, Harris conjures a WILDERNESS as capable of beauty as it is savagery, music that takes the listener on a rugged, emotional journey that provides the ultimate kick to its pairing with KUNG FU.

You can purchase the album HERE.