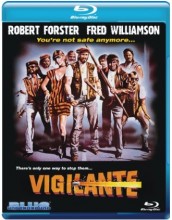 I’ve been getting on a 1980s movie kick as of late, no doubt aided by the constant influx of DVD and Blu-ray releases of classic (and not so classic) films from that era.

Starring Robert Forster and badass Fred Williamson, this is surprisingly one of those films I missed over the years (don’t remember it from cable, nor video stores).

It’s a shame too, because it’s totally Grindhouse approved, a completely unapologetic and surprisingly entertaining action film about a New York neighborhood overrun with crime and the dregs of society with the police helpless to do anything about it.

Hence, a vigilante “team” headed by Williamson as the 100 shades of gray Nick, who along with his cronies (one of them is an ex-cop), start to injure, maim and occasionally kill anyone who represent the worst attributes crime has to offer (you know, those who murder, rape, and deal drugs).

This vigilante group though is only secondary to the main story of family man Eddie Marino (Robert Forster) who finds his life turned upside down when a thuggish gang invade his home, kill his young boy and mutilate (but don’t kill) his wife.

When the criminal isn’t sent to prison, Marino gets pissed and his outburst in court, not surprising, lands him in jail. Once released, Marino has a “death wish” so to speak, and hooks up with Nick to find out more about getting revenge. The end result is a taut 20-minute climax where the family man turns into Dirty Harry and starts picking off the scum that shattered his once normal life.

Williamson, who has starred in his fair share of bad exploitation and bad blaxploitation films is actually quite good here. There are a few obligatory unintentional laugh moments in his action posturing, but for the most part he’s cool, calm and reserved. There’s some real dialogue and emoting here and he serves as the morally questionable antagonist of the piece.

You’d never know from the original poster art gracing the cover of the Blu-ray what a well-thought out and well-made little movie this is (no wonder it remained a Grindhouse staple in New York for months in 1983).

The action is also shot rather well (particularly for a low budget movie). The car chase toward the end between Forster and the baddie is pretty aggressive, well-shot and well edited. The violence is also handled well. It’s gruesome no doubt (they kill a kid in the opening moments, something you would never see today), but it’s stylish nonetheless. As are the moments when the gang members start getting their comeuppance. The girlfriend getting a shotgun blast backwards into the bathtub is ultra-cool (dig that slow-mo and rain of blood).

The digital transfer looks damn good. The widescreen cinematography is quite nice and it captures all the dated ‘80s clothing and hairstyles (and movie interpretations of bad guy gangs) to perfection.

There’s also a little promo trailer Lustig put together with one day’s worth of footage of Williamson to pre-sell the movie.

Blue Underground puts out another winner with their Blu-ray releases. With them and Shout Factory’s Roger Corman collections, it’s been a very good year full of classic ‘80s releases.