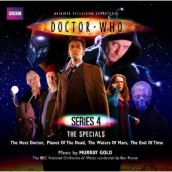 Murray Gold's got the Gallifrean spirit

Whether it’s Halloween or Xmas, TV has loved to celebrate the holidays with special episodes, but it’s doubtful any of them have sounded cooler than when the usually agnostic Time Lord (in the series 4 personages of David Tennant, David Morrissey and Martin Smith) has decided to make the Yuletide gay.

It’s also a great occasion for the always creative DOCTOR WHO composer Murray Gold to unleash the musical bells and whistles for this two-CD compilation that includes “The Next Doctor,” “Planet of the Dead,” “The Waters of Mars” and “The End of Time.”

There are certain musical signatures you expect to hear during the Christmas holidays, among them children’s choruses, regal brass and symphonic spiritual uplift. Gold checks off the list here with an uncommonly sumptuous orchestral sound (exceptionally well played by the BBC National Orchestra of Wales). Given the Doctor’s eccentric nature, Gold’s scores also offer up AUSTIN POWERS-worthy spy satire, goofball carton music that Tom and Jerry could chase their tails around and a clanking Cybermen march (which reprises Malcolm Clarke’s original music from three decades past).

While cool digressions abound, what unites all of these WHO special scores is an adventurous sense of drama and epic jeopardy, the kind of urgency that tells us the universe (let alone Santa) is hanging on Gold’s music- which it usually is in the case of DOCTOR WHO.

There’s no lump of coal in another welcome WHO collection from Silva Screen, which continues to show off Murray Gold as a composer who brings not only a sense of wonder to sci-fi scoring, but also the kind of giddy fun that’s made the new DOCTOR WHO arguably the most successful reinvention of an iconic TV character.

And while that touch can be a bit stranger in the series itself, Gold’s music for the WHO specials share a warm, traditional touch that’s as comforting as warm eggnog sipped in a particularly spiffy TARDIS.

Fa La La with WHO HERE