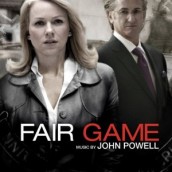 John Powell re-invented the action spy beat when he teamed with director Doug Liman for the first BOURNE IDENTITY, a mélange of ethnic percussion and pounding orchestral drive that Powell’s since varied for the director with the explosive humor of MR. AND MRS. SMITH and the boisterous action of JUMPER. What makes Powell’s new teaming with Liman different is that FAIR GAME’s battlefield is mostly centered around the duplicitous halls of the Bush White House, let alone the suburban home of its finked-out CIA heroine Valerie Plame.

Instead of sleeper agents crashing through her door, it’s the press that wrecks her life when she pays the price for her reporter husband’s reveal that there’s no smoking gun in Iraq. The musical result is an unusually subdued variation on Powell’s ever-reliable undercover rhythms, with just a bit of Middle Eastern textures to reflect the tragic cost of Plame’s blown cover on her contacts who are left to fend for themselves in Sadam’s collapsing regime.

Powell keeps up a suspenseful click-clack pace and subtle acoustic rock vibe throughout GAME, with Plame’s emotions kept to the somber string lines. And while you won’t hear any of SMITH’s tangos here, Powell isn’t beyond giving GAME a welcome bit of pizzicato playfulness. The result is another exciting, impressive hybrid for Powell that’s more about the mental pitfalls of the Washington spy game than running at breakneck pace through some European city with the entire forces of the agency after you.