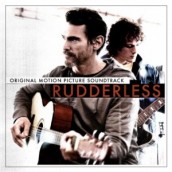 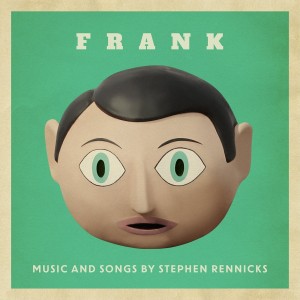 For all of the rock stadium popularity that a studio polished song soundtrack might have, it’s often the raw tunes of a decidedly unsigned, outsider band that reaches into the heart, or madness-addled brain in a way no Grammy-friendly album can. At their best, these little tune-filled albums can even find appeal with score fans who normally regard songs CDs as heresy, an open-minded listen especially deserving from them for a big-headed bizarro and a garage band finding the power of healing in unthinkably written songs.

FRANK is very loosely based on the strange career of England’s Frank Sidebottom, who had way more success than the band of misfit alt. rockers shown in this delightful, odd-head movie featuring a mostly masked Michael Fassbender. If FRANK has a theme amidst the clanging, squealing and buzzing a band quite naturally named the Soronprfbs, then it’s of mediocrity versus truly insane brilliance, a musical idea that’s very smartly conceived by Stephen Rennicks (WHAT RICHARD DID) with an outsider groove so dead on that you think he was likely a roadie for the equally insane Daniel Johnston. But yet this borderline 80s underground-meets-Devo mish-mash of synths, wacky samples, guitars and some truly beautiful piano melodies (with of course a Theremin thrown in for extra quirk) make sense, and are even catchy in their poetic psycho-babble as Frank’s unexpected brilliance is humorously contrasted with his acolyte’s non-talent. FRANK truly rocks during its longer songs like “Secure the Galactic Perimeter,” or when the sound of a “Creaky Door” becomes an ever-amping shaman-like song. It’s Frank by way of Jim Morrison, which is part of the album’s charm of watching an outsider savant reveal that he’s as crazy as a fox, even while refusing to take his cartoon head off. Despite such hilarious, babbling breakdowns as “Frank’s Most Likeable Song…Ever” or Three Stooges samples filling “Frank’s Cacophony,” most of FRANK‘s tunes are surprisingly rockable, with Rennick’s snatches of underscore conveying a folksy, blissed-out vibe of the misfit Soronprfbs’ cult-like adherence to their masked leader. But it’s in the concluding song “I Love You All” where FRANK reaches true, moving poetry. It’s an incredibly catchy song that’s a beautiful plea for acceptance, first performed for its raw, unhinged worth, and then played over the end credits with far more musical finesse. It’s one of the best, and most emotionally clever movie songs this year, though I suspect FRANK is way to wonderfully weird to be on the Academy’s radar.

A far more serious kind of insanity fills the songs of RUDDERLESS, though one might not hear it in the affecting lyrics and performance by stars Billy Cudrup, Anton Yelchin, Selena Gomez and ex Radish member-turned actor Ben Kweller. But that’s exactly the point in these poignant tunes that reveal a wounded soul desperately seeking an emotional connection through his songs – his tragic legacy forming the movie band of actor William H. Macy’s impressive directorial debut. You’d have to think back to “Once” to find such a memorably spiritual collection of acoustically driven tunes that also capture the energy, and enthusiasm of performers beginning to make it big in a small way. RUDDERLESS‘  tunes range from the toe-tapping, grungy top 40 energy of “Beautiful Mess” to gentle hope for “Home,” a feeling of asking for forgiveness that also provides for the movie’s powerful message. But there’s also humor here in the bouncy groove of “Real Friends,” a real school rock version of “Wheels on the Bus” and a relationship laid unplugged raw in “Asshole,” a dead-on song that manages to make even that word sound pretty. Alt. rocker Eef Barzelay, who provided the inventively rhythmic score for the wonderful “Rocket Science” does similarly clever, if more haunted underscoring here, mixing folksy grooves and gentle vocalese that gets across the haunted journey of a father reluctantly turned into a not so over the hill coffee house rocker. So good are Rudderless’ sets that one could easily imagine the band becoming the real deal, especially lead singer Cudrup, whose delivery of the emotionally climactic “Sing Along” makes one feel the ghost of John Lennon as much as it does his character’s son. Not since Prince’s end set of PURPLE RAIN  has a movie singer ripped his guts out to such powerful effect, if done here to understandably more lyrically strumming resonance for one of this year’s most powerfully moving film scenes.

Click on the link to Purchase the RUDDERLESS soundtrack

Click on the link to Purchase the FRANK soundtrack