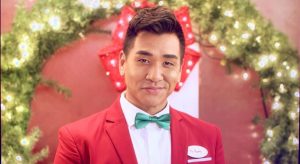 In CROWN PRINCE OF CHRISTMAS, premiering this Sunday, December 11 on Great American Family, Jeff K. Kim plays Mr. Remy, the exacting but kind manager of the upscale Manhattan Garland Hotel. Mr. Remy tries to make everything just right at his establishment for the Christmas visit of the royal family of Luxenworth. If the manager suspects that hotel employees Madison (Cindy Busby) and Sebastian (Jilon VanOver) are falling for each other, he doesn’t let on. And like Madison, he’s unaware that Sebastian is actually one of those royals who is going to be a Garland Christmas guest.

Kim’s other acting credits include the upcoming VICTORIA, THE SIXTH FLOOR, and NOBODY WANTS TO BE JUST ORDINARY. Kim is also a costume designer who has been featured on PROJECT RUNWAY.

In this exclusive interview, Kim discusses his managerial role in CROWN PRINCE OF CHRISTMAS.

ASSIGNMENT X: Did you have to learn how to do anything in order to play Mr. Remy, like research into hotel management?

JEFF K. KIM: I think when playing a character, there are always some things that you have to learn. With Mr. Remy in particular, I had to polish up my English accent, as Mr. Remy is British, and I actually have an American accent. In regard to playing a hotel manager, I was lucky enough to have been able to draw on past professional experiences, when I was a hotel bell person.

AX: Did filming in a real hotel give you a greater sense of actually running the place?

KIM: Yes. Being able to film in a real hotel, gave me an opportunity to really feel at one with the hotel, and my role as the manager of the Garland Hotel. When I had my costume on, especially the shoes, and was able to walk the hallways and the corridors of the hotel, I felt it really allowed me to be able to shape the way that Mr. Remy walked and waltzed through the hotel.

AX: How do you see Mr. Remy as a character?

KIM: I see Mr. Remy as a man who really wants things to be perfect as his hotel. He’s a perfectionist, and wants every detail of how the hotel runs, to be seamless and effortless. With that said, Mr. Remy really cares about his Garland Hotel family. He genuinely wants the best for everyone at his hotel, and wants everyone to feel the warmth and love that the Christmas spirit ignites in everyone, especially Madison and Sebastian.

AX: How was shooting September in Buffalo, New York, for December in Manhattan?

KIM: Filming a Christmas film that is set in New York City, in December, in September was amazing. I felt like I really started getting the itch for the holidays when we were filming. The credit for making it so easy to feel the Christmas spirit should really go to the set designers, prop masters, the director, and the network. Without their precise vision, the film wouldn’t look and feel as great as it does. Every little detail, from the Christmas lights, to the amount of tinsel, to the way the gifts were gift wrapped, to the Christmas cookies, was all thought out meticulously, allowing me to enter into the reality of the Garland Hotel’s winter wonderland.

AX: What was distinctive about the role for you? Mr. Remy seems very strict, but there’s a warmth to him as well.

KIM: Mr. Remy is a perfectionist, and he wants his hotel and his staff to run and work like a well-oiled machine. But there is a warmth to him that comes from a place of the love that he has for everyone. As strict as he may be, he truly has genuine empathy for the people around him, allowing him to really connect with people.

AX: And what would you most like people to know about CROWN PRINCE OF CHRISTMAS?

KIM: The thing that I would most like people to know about CROWN PRINCE is that there is nothing more exciting than feeling the unexpected surprise of a gift. A gift can be as small as a card sharing your gratitude or, in Madison’s case, she falls in love with the Crown Prince. What I love most about CROWN PRINCE OF CHRISTMAS is that the film reminds the audience that everyone can have a surprise happy ending, with a little bit of faith, joy, and support from your family and friends.