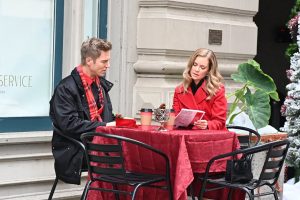 In CROWN PRINCE OF CHRISTMAS, premiering Tonight, December 11, on Great American Family, Jilon VanOver plays Sebastian. Sebastian is a waiter at an upscale Manhattan Hotel. He has feelings for his coworker Madison, played by Cindy Busby. When Madison’s royalty-obsessed family believes that Sebastian is the mysterious Crown Prince of the national of Luxenworth, she doesn’t want to disappoint her kin for the holidays. So, Sebastian agrees to pretend to be the prince when he accompanies Madison to the family home for Christmas Eve.

There’s just one little problem. Sebastian really is the prince. (He tries to tell Madison, but she thinks he’s just committing to the charade.) So, Sebastian has to pretend for Madison that he’s a commoner who’s pretending to be a prince. It’s enough to make somebody’s crown spin.

VanOver, a native Californian, has credits that include BETTER CALL SAUL (coincidentally, also as a character named Sebastian), THE ALLNIGHTER, THE FIELD GUIDE TO EVIL, CHICAGO P.D., and the horror movie BOO, directed by CROWN PRINCE OF CHRISTMAS helmer Anthony C. Ferrante. In this exclusive interview, VanOver discusses playing the title role in CROWN PRINCE OF CHRISTMAS. 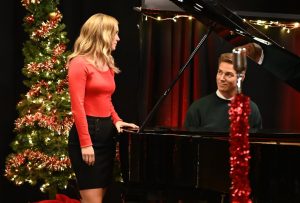 ASSIGNMENT X: How did you decide on what kind of accent Sebastian should have?

JILON VANOVER: Being a member of a royal family, Sebastian is obviously well educated, but I didn’t want him to sound too posh. After all, he doesn’t want anyone knowing he is a prince. I listened to a variety of different dialects, and ended up taking the RP [British “received pronunciation”] dialect, and loosening it up a bit to make it slightly more casual.

AX: Did you have to learn how to do anything in order to play Sebastian besides the accent, in either his hotel employee or royal capacity?

VANOVER: I didn’t necessarily have to learn how to do something, except to remember the things I’ve learned along the way: to be patient, to have gratitude, to be kind and generous. And probably the most important for an actor … remember all those lines! 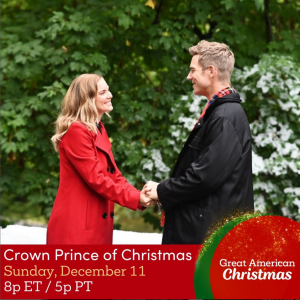 AX: Did you and Cindy Busby have any time to work on the relationship between your characters?

VANOVER: Cindy and I came to Buffalo [New York, where CROWN PRINCE FOR CHRISTMAS was shot] a few days early, and our first interaction was a text thread that had us both cracking up. We had an easy chemistry that was invaluable to our characters, and a wonderful place to grow from. We spent an afternoon going through the script with Anthony discussing ideas, and fine-tuning as much as we could. By the time we started rolling, we felt ready.

AX: As an actor, you’ve done a variety of genres – is there anything special about romantic comedy?

VANOVER: I think it’s the love and the joy that’s underneath it all. That combination is incredibly uplifting. I remember one Christmas feeling terribly depressed for one reason or another. I went and saw SOMETHING’S GOTTA GIVE, starring Jack Nicholson and Diane Keaton, and when the movie was over, whatever funk I had been dealing with was gone. Never underestimate the power of laughter, love, and story. 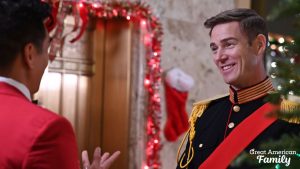 AX: How was shooting September for December in Buffalo, New York?

VANOVER: September in New York was absolutely lovely. The bitter cold had not landed yet, and it’s much more comfortable to pretend the cold than have to endure it.

AX: What was the hardest part about filming CROWN PRINCE FOR CHRISTMAS?

VANOVER: The hardest part about filming on location is leaving my family behind. FaceTime is an amazing invention, but it can actually make it harder [where I can call] my wife and children, yet not be able to hold them in my arms.

AX: What would you most like people to know about CROWN PRINCE FOR CHRISTMAS?

VANOVER: That it airs December 11th at 8 PM ET/5 PM PT. Beyond that, I just want people to see it, and I hope it brings them joy.