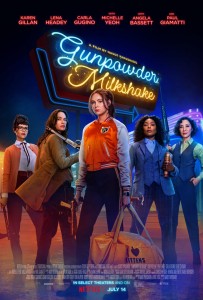 GUNPOWDER MILKSHAKE is an action movie that stars Karen Gillan, Lena Headey, Carla Gugino, Michelle Yeoh, Angela Bassett, Paul Giamatti, and Ralph Ineson, and introduces a capable young performer, Chloe Coleman. Do we really need to know more than that to persuade us this is worth seeing?

For those who want more information, GUNPOWDER MILKSHAKE takes place in one of those larger-than-life, graphic novel-style universes where there’s lots of neon. It also seems to be full of places that cater to assassins: a diner where gun control is strictly enforced, a spanking clean hospital where no one calls the cops, streets clear of traffic jams, and so on.

Sam (Gillan) is a contract killer, just like her mom Scarlet (Headey). Scarlet carried out an act of vengeance fifteen years earlier and vanished from the lives of everyone who cared about her. Now Sam works for The Firm, Scarlet’s old employers.

The Firm sends Sam on two messed-up missions. The first is a problem because of the identity of one of Sam’s victims. The second is a problem because Sam, while she normally has no qualms about killing her targets, values the life of an eight-year-old girl, Emily (Coleman), above the bag full of money she’s been sent to retrieve. The Firm isn’t happy, nor is a rival gang.

To protect herself and Emily, Sam winds up working with allies who are just as effective as she is.

There are many joys to GUNPOWDER MILKSHAKE. The first is that director Navot Papushado has cast the film with so many formidable figures. We come in entirely ready to believe that women played by Headey, Yeoh, and Bassett can beat the bloody life out of any adversary, and they do not disappoint. Gillan fully holds her own, physically and dramatically. Gugino mixes steel and sweetness, and Coleman impresses.

The next pleasure is that director Papushado not only knows how to stage action, but that he does it in a way that respects the performers. There are no shots of rear ends or accenting breasts. Likewise, costuming (hallelujah) befits people who expect to move and run: flat shoes, covered limbs. There’s a lot of bonding and re-bonding in GUNPOWDER MILKSHAKE, but it otherwise resembles a more standard (i.e., one with a predominantly male cast) action film, in that nobody dresses like they’re on a date, much less possibly selling their sexual services.

The slight flip side of this is that the screenplay by director Papushado & Ehud Lavski doesn’t have a whole lot in the way of plot, just connective tissue that leads from one set-piece to the next. We don’t get so much as a focal-point bad guy, much less twists and turns. Sam’s opening speech about being controlled by The Firm seems contradicted by everything we see – she’s employed by them, but she’s not too worried even at the outset about defying them. There’s nothing wrong with this, and indeed, it gives Sam backbone. It just feels like an early version of the script may have gone in a different direction, and the filmmakers didn’t bother to remove this remnant of what’s left.

GUNPOWDER MILKSHAKE is therefore not the most cleverly-structured action film out there. It is, however, the one that brings together Gillan, Headey, Gugino, Yeoh, and Bassett, and effectively demonstrates and celebrates their awesomeness. Again, how much more is strictly necessary?