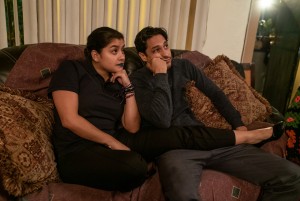 VIDA, now in its third and final season Sunday nights on Starz, has a strong ensemble cast. While the series, created by Tanya Saracho, centers on the Hernandez sisters, Lyn (Melissa Barrera) and Emma (Mishel Prada), it also explores the lives of those around them in East Los Angeles.

These people include Eddy Martinez, played by native Californian Ser Anzoategui, who is also a playwright. Anzoategui was also a regular on EAST LOS HIGH. Eddy is the widow of Lyn and Emma’s mother Vidalia. She is currently reeling from a series of blows, both literal and physical. After Vidalia’s death, Eddy got jumped and beaten so badly that she was hospitalized, she lost her say in the running of Vida’s bar (inherited by Lyn and Emma), and she’s just found out that Vidalia lied about the death of her husband (played in Season 3 by Jesse Borrego), who is alive, in Los Angeles, and never legally divorced.

Chelsea Rendon, also Californian, whose other credits include SHAMELESS, THE FOSTERS, HIGH & MIGHTY, and the award-winning feature NO TURNING BACK, plays Marisol “Mari” Sanchez. Mari is a young community activist who is currently caught in the middle of an increasingly tense confrontation between her friends, who think the Hernandez sisters are “gentefying” (appealing too much to the Latinx moneyed classes) the traditionally working-class neighborhood by upscaling the bar, and the sisters themselves, who employed Mari to help Eddy during her recovery. Mari got thrown out of her father’s house when he saw Internet footage (that Mari didn’t know was being recorded) of Mari with her then-boyfriend. Now Mari is sleeping in her brother’s office and working two jobs while seeking a new home. 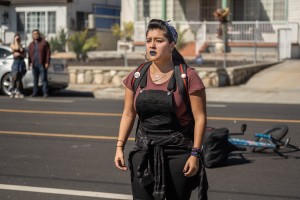 Carlos Miranda, previously a regular on ANA, plays Mari’s brother Johnny. Johnny is a new father with his ex-fiancée Karla (Erika Soto), who broke up with him over his on-again, off-again relationship with Lyn.

Anzoategui, Rendon, and Miranda all sit down together to talk all things VIDA Season 3.

ASSIGNMENT X: VIDA Season 2 ended pretty dramatically for everybody. What are your characters each dealing with in Season 3?

CHELSEA RENDON: Mari, pretty much, she ended Season 2 all alone and homeless, so this season, you see her kind of pick up the pieces and also figure out what she’s going to do with her life. And it also takes her to a new path. I’m excited to see how the fans react to that.

CARLOS MIRANDA: For Johnny, he is dealing with parenthood, he’s a new father. He’s also having to figure out how to reconcile with Mari, because he kind of threw her under the bus in the second season. All of that. And there’s always that –

SER ANZOATEGUI: For Eddy, definitely, coming into this season, just confused, angry, fighting with Vida, basically. While Vida’s not around, the things she did on Earth while she was here, while she was alive [laughs], still is affecting Eddy and everybody around her. So this huge secret that Eddy’s holding onto of the father, and who the father is, and also that there is a twist for Eddy this season that hasn’t happened yet, and I think fans are going to really love it, it’s something I think she deserves [laughs], she’s been waiting for a while. So this unexpected character comes on, so it’s going to be really funny, too, because Eddy’s not used to it. So we’re going to see how she responds to this new character showing some interest in her, as well as what this does with the secret that she holds, what she’s going to do with it. This could ruin their lives, or it could be something good for them, but she has the power in her hands, which is very unusual for Eddy. So what she does with that power is going to ultimately tell you what’s going to happen in the rest of the season. 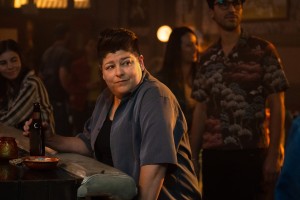 MIRANDA: There’s a lot of growth all around with every character this season, I feel like. You see them level up in their lives.

AX: Is Mari still political this season, or does she feel burned by that political community at this point?

AX: Playing Johnny, how is it dealing with the infant who plays the baby daughter?

MIRANDA: No. My sweet little princess is pretty much asleep a lot of the time that I worked with her. And I’m a dad, so I know how to work with babies. 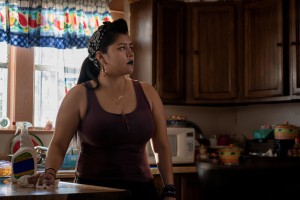 AX: In Season 2, and I would guess in Season 3 of VIDA, because it picks up only a day later than the end of Season 2, how challenging is it to deal with Eddy’s injuries?

ANZOATEGUI: As an actor?

AX: Yes. To perform, and also to protect yourself in reality so you don’t injure yourself when you’re contorting your body to play the injuries.

ANZOATEGUI: For me, that was the hardest in Season 2, but I’m still working through it physically, because when you do crutch work, that’s something I learned, that I had to take care of myself through it, and see a chiropractor once a week [laughs]. No, I was fine. I’m just saying that it’s just a lot of work, that it could keep going after this season. But this season is like the pain, on top of the betrayal, the confusion, also the ever-changing neighborhood, losing everything that she knows. So it’s juicy for me as an actor to keep layering, and that’s what I’m very grateful for the writers, because they really do layer this season incredibly, so it’s really good for me to play with. There’s something that happens, too, that Eddy has to face the past again, and that sends her into PTSD. So it’s really intense. The writers throw wrenches a lot in there, so it definitely is quite a ride for Eddy.

AX: [to Anzoategui] You’re a writer as well as a performer –

AX: [to Rendon and Miranda] Do you guys –

MIRANDA: Write or do anything else?

MIRANDA: Yeah. I got an entry at film.com, go ahead and check that out whenever you want. It’s a little short film [END TRIP] that I wrote and directed a while ago, in a time of wanting to be creative. I wouldn’t call myself a writer or a director – I’m an actor first – but – 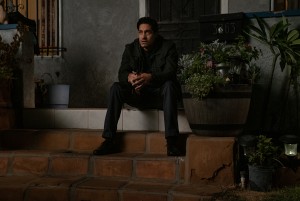 MIRANDA: I’m an artist and I definitely would love to create.

AX: For all of you, has your experience on VIDA affected/informed your creative work outside of VIDA?

RENDON: The fact that there are so many women in powerful positions [on VIDA], and the fact that it’s normal, at least on our set. And now when we go to other sets, and if we get into the position where we have power, to say, “Hey, I want a female d.p.” or “I want a female this,” we can do that. And now we know we can ask for that. Before the show, I didn’t know that I could ask for that, and I think that’s really important. And then just the family vibe that I think came from it, and the bond that we created, not only with each other, but with Tanya and the producers, and how giving and nurturing they were to us.

ANZOATEGUI: I feel like I could finally act. With this role, it shows that a nonbinary actor could play other things than whatever is in people’s minds, and I think the Eddy character has really opened up people’s own misconceptions, preconceptions of what this character is like, and also the double-edged sword is that people think I’m like Eddy, so it’s also presenting the world with my other intersections, other identities, myself. And that’s exciting because so many people are just used to seeing stereotypical characters on television, but this is opening it up to being like, “Oh, maybe there can be a butch lesbian main character or a nonbinary main character,” where it’s not just about one thing, it’s a full, rounded character. 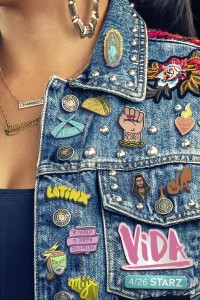 AX: In real life, you are nonbinary. Does Eddy identify as being female?

ANZOATEGUI: Identifies as a woman, yeah. There is an exciting scene in [Season 3] Episode 5, as an actor, as someone in the community, I’m excited that it was shot, so I’m excited for what it means for those who do have questions about their body and their identity. And Eddy’s going through something that’s like, they see things going on, and they’re like, “What’s this?” So it’s cool.

AX: Not asking for spoilers on VIDA Season 3, but in Seasons 1 and 2, do you each have a favorite scene, or a favorite episode?

MIRANDA: Oh, man. I always love the last scene I had with Lyn in Season 2, at night, on the van …

MIRANDA: Yeah. That was really beautiful.

RENDON: I think one of my favorite scenes is the first scene where you see Mari and Johnny –

MIRANDA: Oh, I love that scene, too. And that was the scene that we auditioned.

MIRANDA: Oh, I’m talking about Season 1. I like that, too, because it was cool to do it.

MIRANDA: I also like when Johnny comes and helps Eddy, when Eddy pees in the bed.

ANZOATEGUI: Oh, yeah. I think in Season 3, I particularly feel strongly about, we have drag kings [women in male drag] in Episode 5, and the drag kings to me are so important, because so much emphasis over the past years has been on drag queens, that to see women take ownership of masculinity is super-important. 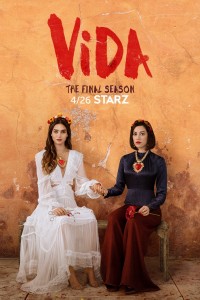 RENDON: We [Rendon and Miranda] guest-starred on Episode 14 of ALL RISE together. That was funny, because I was on set, and then he got the call, and then he’s like, “Wait, are you doing this?” And I’m like, “Yeah, oh, my God!”

AX: Are you playing siblings?

RENDON AND MIRANDA: No [both laugh].

MIRANDA: And I’ve got a little indie movie set in New Jersey that we’re trying to get up and running, that I’m co-producing and starring in.

ANZOATEGUI: I’m working on developing a few things I’m writing, and working on a solo show.

AX: And what would you all most like people to know about VIDA Season 3?

MIRANDA: That you’re going to love it.

ANZOATEGUI: Try to stop watching it. You’re going to be hooked.

RENDON: Yeah. It’s fun, and it’s real, and it’s important to see all the aspects of all of the different characters, of what people find important to them, and what they connect with, and that all of the audience connects with it in so many different ways, and I think that’s a beautiful thing.

MIRANDA: To reiterate what I said earlier, I’m excited that you want to see everyone’s growth, and how you were all introduced to these characters in the pilot, and just to see where they are now.