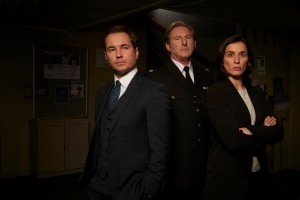 LINE OF DUTY is a British police drama unlike most. For one thing, it just won an Edgar Award from the Mystery Writers of America for Season 5, Episode 4. For another, LINE OF DUTY deals with a subject that U.S. police dramas so far won’t touch as a series premise: Internal Affairs. The series has so far run for five seasons, with a sixth currently in preproduction. All five seasons are available on the Acorn TV streaming service, while the first three are available on cable/streaming on AMC on Demand.

In LINE OF DUTY, Anti-Corruption Unit 12, AC-12 for short, oversees a section of the English police force. The division is run by Ted Hastings (Adrian Dunbar). In the first season, Detective Steve Arnott (Martin Cumpston) joins AC-12 after having been banned from the anti-terrorism squad. Arnott’s sin? Reporting a superior officer who raided the wrong apartment and subsequently tried to frame the dead man as a terrorist. Detective Kate Fleming (Vicky McClure) also becomes a major player.

Although they initially seem to be tackling very different stories, Seasons 1 through 3, made from 2012 through 2016 – seventeen episodes altogether – turn out to weave one enormous tapestry. In contrast to shows that end seasons on cliffhangers and then never return, LINE OF DUTY appeared to assume it was never coming back and having season-enders with onscreen notes telling us what happened to the surviving characters. Then the next season would come along and add to that. The overall effect works on both the macro and micro levels. We marvel at the enormous mosaic of it all, while still being drawn into the moment-by-moment suspense and twists.

Jed Mercurio, who created LINE OF DUTY, has written all the episodes to date and directed a few segments, starts out Season 1 with AC-12 looking into highly decorated police detective Tony Gates (Lennie James). Gates is suspected of “laddering,” i.e., artificially inflating his success rate, so Arnott is sent to investigate. Arnott thinks it’s possible that Gates’s statistics are legitimate and that Hastings is simply resentful.

Gates is happily married with children, but also has a girlfriend, businesswoman Jackie Laverty (Gina McKee). When Jackie has a car accident, she asks Gates to fix it so that it won’t go on her driving record. He reluctantly agrees – and the fallout is much farther-reaching and catastrophic than Gates, Jackie or AC-12 (or the audience) can possibly imagine.

The cast, main, guest and supporting, are all excellent. Dunbar puts a soul into Hastings (who might be unbearably righteous otherwise), James is superb as the conflicted Gates, and Keeley Hawes keeps us going back and forth on her character, introduced in Season 2.

A show like LINE OF DUTY, if it were set in the U.S., would seem disingenuous if it did not deal with shootings/killings of BIPOC citizens by police officers. In the U.K., however, regular police officers (and citizens, for that matter) do not carry firearms as part of their jobs. There are issues with racism – and sexism, and Islamophobia, and homophobia, and so on – but there isn’t a resultant literal death toll. So LINE OF DUTY is probably a bit freer than an American version might be to explore other, more Byzantine abuses of police power. It does this in thrilling fashion, season to season, episode to episode, and even scene by scene.