The actor talks playing the series' resident techie and skeptic 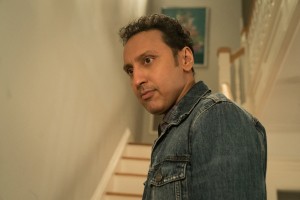 EVIL is set to return for a second season on CBS in the fall. Meanwhile, people are discovering and/or enjoying rewatching the first season the series on CBS All-Access.

Created by the married writing/producing team Michelle King and Robert King, EVIL gives us Catholic Church “assessor” (of whether something supernatural is actually happening) and priest-in-training David Acosta (Mike Colter) and newly-recruited and non-believing forensic psychologist Dr. Kristen Bouchard (Katja Herbers). The third member of the team, tech expert Ben Shakir, is played by Aasif Mandvi. Ben is able to determine when digital information has been faked. Ben is an even bigger skeptic than Kristen, though events in the latter part of EVIL Season 1 have given both of them pause.

Mandvi, originally from India, is also a writer and producer. His books include NO LAND’S MAN. He wrote, directed and starred in the TV special AASIF MANDVI’S ALL STAR DEPORTATION JAMBOREE. He won an Obie Award for his one-man play SAKINA’S RESTAURANT, and was a writer and co-producer as well as co-lead on the HBO series THE BRINK. Mandvi worked as a correspondent on THE DAILY SHOW from 2006-2017. and has acted in a wide variety of films and television, including the series JERICHO, SPIDER-MAN 2, THE PROPOSAL, MARGIN CALL, MILLION DOLLAR ARM, MIRA ROYAL DETECTIVE, BLUE BLOODS, THIS WAY UP, YOUNGER, and HALAL IN THE FAMILY, which he wrote with Miles Kahn. Mandvi also appeared in an episode of PERSON OF INTEREST, which starred fellow EVIL actor Michael Emerson, who portrays the wicked Leland Townsend.

ASSIGNMENT X: How do you think Ben views the supernatural by midway through Season 1? He’s had a few experiences by this point …

AASIF MANDVI: I think Ben’s milieu is his own certainty, in terms of what he knows and what he can quantify. He is a true empiricist in that way. I think there have been a couple of challenges to that, especially with his sister [being tormented by a ghost in the machine] and stuff that happened. But I think he’s still in that place where he believes that he can solve the thing. He can find the answer. He’s sort of almost the direct opposite sometimes of Leland, where Leland wants to sow chaos. I think Ben always needs to find order and meaning in things, and I think he’s still in that place. We’ll see where that goes. There is definitely something going on where Ben is being challenged in his certainty by this new person [Nicole Shalhoub] that he’s having this romantic [relationship with].

AX: She believes that her sister lives in her arm, and sometimes possesses her …

MANDVI: Yeah. I like the juxtaposition of the fact that he is so certain about things, he’s so cerebral about it, than when you get to a point where his emotions are getting involved, he doesn’t know how to integrate what he truly believes about the universe with his emotional reality of being attracted to this woman, who thinks that she has a ghost attached to her arm. So I love the fact that they’re writing more into that, this idea of where does Ben’s certainty start to fail, and fail him, and when does he allow that to happen. It’s like that old adage of, “Everything is equal until love and war are inserted into the equation.” So that’s kind of what this is.

AX: Do we know how much of a religious believer Ben is? Obviously, he doesn’t believe in the Catholic stuff …

MANDVI: No. Ben comes from a religious family. His sister [Sohina Sidhu] wears the hijab. I think his father prays. So there’s somewhere where religion has betrayed him, or what he would consider that kind of blind belief has betrayed him. And I think a lot of the way he lives now is in this place of staying in the world that he knows and can trust and that can’t let him down, which is science and facts.

AX: So he is very secular …

MANDVI: He’s very secular, and I think that obviously, that character, just with good storytelling, needs to be challenged at some point in his certainty. I think personally, psychologically, that Ben is afraid of those things, and this is his way of dealing with the world, is by making it all very science, fact-based.

AX: Have you had to learn how to do anything in order to play Ben, like how to look like you know what you’re doing when you’re installing a detector or computing, or …?

MANDVI: Yes. It’s the old [Laurence] Olivier quote of, “Acting, my dear boy.” There’s one scene actually that got cut out of the show, but it’s online. It was all about an Euler triangle, and it was this whole scene with Mike Colter and I about geometry and Euler triangles. And I spent two days studying, just doing a crash course in geometry and Euler triangles. I learned a great deal. So there are occasionally times where I have to just learn what a cantilever is and things like that. So I do a little bit of homework as it applies to what I need to do on the show.

MANDVI: Saying and doing, because sometimes Ben is fixing things and doing stuff, and I need to know what he’s talking about, just to make sense of it as an actor, I do that homework. – I’m not a handyman, as my wife will attest, so it’s been interesting for me to learn about it. And fun in a lot of ways. 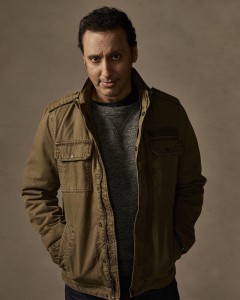 AX: You’ve got a lot of comedy in your background, and Ben also seems to be the designated one-liner character when the group is together …

AX: Does that come in handy? Do you feel like you’re being stereotyped as the funny guy?

MANDVI: Look, I love doing comedy, and I think part of the reason that the Kings hired me in this role was because I think they did want Ben to be not only the debunker, but also the guy with the pin that pops the balloon. And there’s a comic angle to that. That’s what comedians do. They sort of insert the truth into, dare I say, b.s. I did it for many years on THE DAILY SHOW, where we were sort of truth-inserters. And I think Ben has a little bit of that. He’s devilish in that way.

AX: Are you ever invited to tweak your dialogue?

MANDVI: Oh, sure. There are many times when something doesn’t feel right, or doesn’t sound right, we can email or text with Robert and Michelle and just say, “Hey, I’m struggling with this,” or “I’m trying to find this,” and they’re really happy to have a conversation about it at any time.

AX: Will we be seeing more of Ben’s dad and his sister?

MANDVI: I hope so. This is the conversation we’ve been having about Season 2, which is, I’m hoping that we bring the sister back, because she was such a great character, and there’s a whole storyline there about her unborn child that has been left hanging. And what the Kings like to do, I think, is sometimes to put something in there in the mix, and then pay it off maybe further down the line. So we have talked about, in Season 2, seeing more of that world. And also, Ben comes from a Muslim family that’s more religious than he is. And so what is that world about? I’m very curious to find out about that.

This interview was conducted during the Winter 2020 Television Critics Association (TCA) press tour.