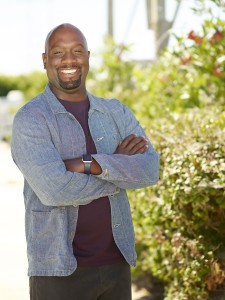 In ABC’s Tuesday night drama THE ROOKIE, Nathan Fillion plays the title character, John Nolan. Nolan joins the LAPD in his forties, which is highly unusual.

Richard T. Jones plays Sergeant Wade Grey, who is vehemently opposed to Nolan joining the force, fearing that an older newcomer will be a distraction at best, a lethal danger at worst.

In his own career, actor Jones is no rookie when it comes to playing law enforcement. He recently portrayed police detectives in WISDOM OF THE CROWD and AMERICAN HORROR STORY, an officer as a series regular on BROOKLYN SOUTH and a recurring role on CRIMINAL MINDS , and a DEA agent in NARCOS. Some of Jones’s other notable gigs have included being a series regular in JUDGING AMY, playing Ike Turner Jr. in WHAT’S LOVE GOT TO DO WITH IT, and EVENT HORIZON, TERMINATOR: THE SARAH CONNOR CHRONICLES, and SANTA CLARITA DIET.

ASSIGNMENT X: THE ROOKIE is based on a real person who joined the LAPD in his forties. Did you get to meet the real person?

RICHARD T. JONES: Yes, I did. And he’s so nonchalant, you would never know he was a forty-year-old cop. He’s in terrific shape, in total shape, very young personality, so you wouldn’t know he was forty years old – I think he’s now forty-five, forty-six, maybe.

AX: So he’s been doing this for a few years now?

JONES: Exactly, yes. But really focused, very in shape, and he loves what he does. He thinks it was a great choice for him.

AX: You’ve played a lot of people in law enforcement. You’ve even played LAPD officers before.

JONES: Yes. Law enforcement has been very nice to me. It’s been a lot. I’ve played an LAPD detective before, so this is the first time I’m playing a patrol officer.

AX: Some of your cast mates have said they actually got tasered in the course of doing research for their roles in THE ROOKIE. Did you do that?

JONES: I did skip the tasing.

AX: At this point in your career, do you look at police roles in any particular way different from other roles, or is it all just acting work?

JONES: It’s work, but you always try to find something different in each role. What makes this cop different from the last cop you played, the last several cops you played? [laughs] But every one is a human being, so you just try to find the humanity in each character. What makes him different is actually his heart for his people. He really cares about his unit, he really struggles with the fact that Nathan might bring a different element of just life experience. I know it’s not a bad thing, but you’re bringing your life experience, which might taint the way we do things.

AX: Grey thinks John Nolan is the thin end of the wedge …

JONES: Exactly. I believe Sergeant Grey is hard on Nathan’s character just because he is older and, as [THE ROOKIE creator] Alexi Hawley will tell you, when you are older, you might be set in your ways. And I think he might cause a problem, and an issue for the unit as a whole, and put people’s lives in danger, just because the LAPD is such a hard job. It’s something that you can’t go in thinking you know what the right answer is. You have to be willing to learn, and I think the character feels that maybe he’s at the age where he wouldn’t be willing to learn the process. 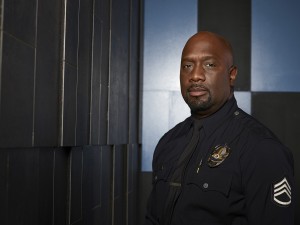 AX: And if Nolan settles into the squad, the next thing you know, it’s going to be a bunch of yuppies.

JONES: [laughs] Exactly. And I don’t want to go from the protocol – I’m very old-school, I believe this is the way it should be done, there’s a reason why we train rookies young, so we can mold them and create officers. And when you come in with so much baggage, it could be a problem.

AX: And the younger officers are more flexible, mentally and physically – you don’t see a lot of forty-year-old Olympians, either.

AX: As the sergeant, Grey is in charge of a squad of novice officers. How is playing the person supervising a bunch of relatively intense people?

JONES: I think it’s interesting. You would think it would be tough, but because we have such a good group, a good, solid group, we actually have a very good time. It’s actually easier because they are such sweet people that riding them is actually fun, because it’s funny to us all, because it’s so different from my real-life [personality].

AX: How is it insulting Nathan Fillion on a several-times-an-episode basis?

JONES: I love it [laughs]. I love insulting Nathan. It’s so hard, because he’s such a good person, such a sweet man. I actually have to really dig deep to insult him, because he’s so sweet. He’s always giving you gifts, and saying, “You’re so [talented],” so you’re like, “Let me hate you! Pretend I’m Method, so I can really get into you!” But he makes it so easy and so relaxed to do something.

AX: Alexi Hawley has said that THE ROOKIE is probably not going to be exploring issues like Black Lives Matter, and whether or not the LAPD helps ICE, or doesn’t help ICE, because he felt that the show didn’t have the right tone to deal with those appropriately.

JONES: That’s right. I think he’s right when it comes to those things, because the show is not centered around those types of issues. It’s centered more on the street life, day to day, kind of cop things, and those issues aren’t political in any way, so I think it’s the right call for him to do that.

AX: And what would you most like people to know about THE ROOKIE?

JONES: That it is an exciting show, especially for network television. It’s a fun, action-packed ride, and I think people are going to enjoy it. I think it’s one of those shows that is one of a kind, so hopefully we do it justice.