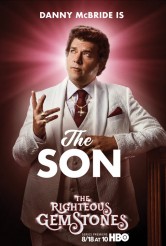 The actor talks about his new HBO comedy series 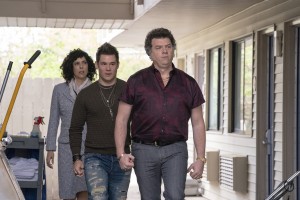 Having taken on football in his previous series EASTBOUND & DOWN and high school office politics in VICE PRINCIPALS, both for HBO, creator/executive producer/star Danny McBride returns to the network with his new Sunday-night dark comedy THE RIGHTEOUS GEMSTONES.

The Gemstones are a family running a massively financially successful evangelical ministry. Patriarch Eli Gemstone (John Goodman) is mourning the death of his wife, which doesn’t stop him from indulging in a few less-than-saintly activities. McBride plays Jesse Gemstone, one of Eli’s sons.

As an actor, McBride is also known for his work in feature films including THE FOOT FIST WAY, PINEAPPLE EXPRESS, TROPIC THUNDER, ALIEN: COVENANT, and THE DISASTER ARTIST. As an executive producer/writer, McBride collaborates frequently with director/writer/producer David Gordon Green (they did last year’s HALLOWEEN together, which Green directed, and are working on two sequels) and writer/producer Jody Hill; Green and Hill are both executive producers on THE RIGHTEOUS GEMSTONES.

The following interview combines comments McBride made on a Q&A panel for THE RIGHTEOUS GEMSTONES and a one-on-one conversation later that day.

DANNY McBRIDE: I always knew I was going to write something for myself to be in, so it was a matter of what world I wanted to dance in.

AX: Is Jesse very different or similar to other people you’ve played?

McBRIDE: I feel like there are shades that are similar, but I think it ultimately is exploring something different than what the other shows explored.

McBRIDE: Yeah, definitely. EASTBOUND and VICE PRINCIPALS both revolve around characters that, for whatever reasons, believe they were owed something more than what they got in life. And so they walk around with a chip on their shoulder. The Gemstones have gotten exactly what they’ve always wanted in life, and we wanted to show how corrosive and damaged you could still be, getting everything you want. And for us, it was interesting if these people were actually really good at what they do, so much so that they’ve created this massive empire. And so the scope of the show just called for it. And we’ve always wanted to kill more people in our shows, too, so that was good to finally be able to evolve into doing that.

We crafted [Jesse Gemstone] like he was an amalgamation of a bunch of headlines we’d seen, from disgraced celebrities to disgraced athletes. You sort of take the best of those and jam them into one. And even when we shot the pilot, I think there was a viral video of a mega-church pastor talking about his jets. And we had just shot the pilot a month earlier, and it was like, “God, this is crazy. We just did that, he copied us.” There wasn’t just one inspiration. I think it was just, as a whole, how massive some of these operations are. They were just ripe for satire. I think that, ultimately, if you’re a religious person, you don’t like the Gemstones, and you definitely don’t identify with them. So I think the idea that we’re taking a little bit of the piss out of a guy like this – even if you’re religious, you’re not necessarily proud to have him on your side. 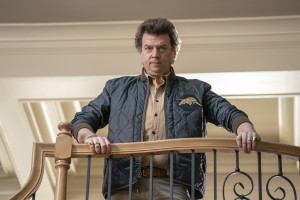 AX: What do the Gemstones actually believe? Is there any sincerity at all to their faith?

McBRIDE: They probably lean more to prosperity gospel. But talking about some of these mega-churches, they just try to appeal to as many people as they can, going so far in some places that they even take down images of the cross or things that [they think] might turn people off. So I think the Gemstones are the epitome of that. I think they’re trying to basically water everything down to not offend people, and just to get as many people bringing money into the church as they can.

We leave a lot of the work up to the audience to figure out where you align with these people, where you disagree with them, where you agree with them. I think, to an extent, they are all believers I do think that they all believe in what they’re saying, but I think they have a different relationship with faith. I also think they’re so privileged that they exist in this realm where their image of themselves is that they’ve somehow almost transcended judgment themselves. And so, yeah, I think that this operation has gotten so big that everyone, to an extent, has lost their way.

AX: Would you say THE RIGHTEOUS GEMSTONES is more about sending up a certain type of ministry than anything about actual religion?

McBRIDE: I feel like when Hollywood decides to take on religion, they make the deathly mistake of lampooning people for their beliefs, which is not something I’m really interested in doing. I don’t know enough about what I believe in order to go and pass judgment on other people. So for us, it’s about lampooning a hypocrite, lampooning somebody who presents themselves one way and does not act that way underneath. And I don’t think that’s something that is just relevant to the world of religion and televangelism. I think it’s something that’s relevant in the world we live in, that you’re constantly being exposed to people who present themselves one way on social media, but act another way in person. I think hypocrisy is everywhere, and I think that’s ultimately what this story is about, about what happens when you don’t practice what you preach.

Ultimately, I don’t think that this show is anti-religious. I grew up in a very religious household. I grew up going to Baptist church. My mom did puppet ministry growing up. She ministered to children. I spent every Sunday, every Wednesday, every Saturday night at church, and a lot of my family is still very involved with the church. My aunt is a minister in Atlanta. And so when I say that we’re not taking aim at people’s faith, I’m being honest. I’m not just saying it to try to shy away from controversy. It wasn’t a goal of mine. I wanted to make something that my aunt, who’s a minister, could watch and find the humor in as well. I don’t think she’ll appreciate the language or the drug use, but I’m not taking a swipe at her or what she believes in. I’m setting a story in a world that she is very familiar with, and ultimately, it’s a story about a family, and about a family who has grown very, very successful and have lost their way along the way, and I think that’s relatable. 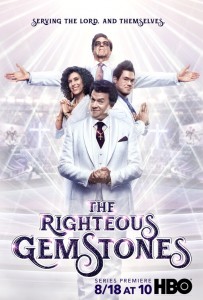 AX: Puppet ministry sounds interesting. Were you able to work that in?

AX: If you get another season?

McBRIDE: Maybe it could find its way.

AX: Working in any HALLOWEEN references?

McBRIDE: [laughs] I don’t think there are this season, but we will see what happens.

AX: According to IMDB, you and David Gordon Green are working on the screenplays for the second and third installments in the HALLOWEEN franchise, among other things. How are you managing your time between the projects?

McBRIDE: I just work all the time, and David Green and myself are workaholics, so we just don’t stop.

McBRIDE: Yeah, basically. Split your time. At least it’s all stuff that’s fun to work on. 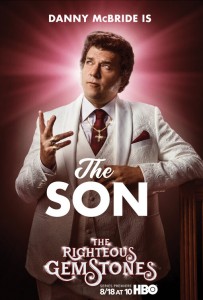 AX: What would you most like people to know about THE RIGHTEOUS GEMSTONES right now?

This interview is partially derived from an HBO Q&A session for THE RIGHTEOUS GEMSTONES and partially from a one-on-one conversation at a Warner Media/HBO party, both part of the Summer 2019 Television Critics Association press tour.