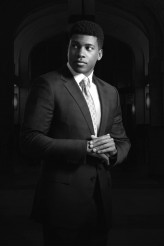 The actor talks his idealistic character on the new series 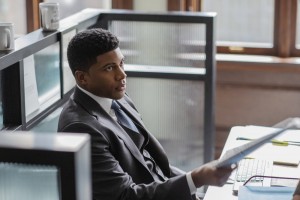 In USA’s freshman Wednesday-night series PEARSON, spun off from the network’s long-running SUITS, Gina Torres reprises her role as Jessica Pearson. No longer a New York City lawyer, Pearson has moved back to her home town of Chicago to become a fixer for the mayor’s office. Here, Pearson encounters mayoral aide Derrick Mayes, played by Eli Goree. Derrick is an idealist, who is eager to assist Pearson in breaking rules, so long as he thinks it’s for a good cause.

Goree [pronounced Gore-AY], originally from Canada, has had a strong few years as an actor, with recurring roles on BALLERS, RIVERDALE, and GLOW. He says even before PEARSON came along, he was looking for a role like Derrick.

ASSIGNMENT X: Were you a fan of SUITS before this?

ELI GOREE: Big fan. Love the show, love the writing. It’s kind of wild. Because before I got this audition, I had talked to a friend of mine, and I said, “I’m trying to just make a character that I’m going to play, that I feel like I want to perform.” So I was like this idea of, the smartest guy in the room, and really sharp, so I was watching a lot of Aaron Sorkin, a lot of SUITS, and I was doing it at all my auditions. I went in for a cyborg, and I’m doing this fast, rapid-paced delivery [laughs], and they were like, “Uh, what is that?” But then, PEARSON just came, and it was a perfect fit. And I ended up not having to test for this. This was an offer. I went in for I think one audition, and I was up for another show, and they came in and they said, “We can test you, we’d really like to have you,” and I said, “You know what? Fine.” So I told the other show, “No, I’m not going to do it.” It wasn’t anything about the other show, it just this was a better fit. And then after I turned down the other show, they said, “You know what? Don’t worry about it. We’re just going to offer it to you.”

AX: Is Derrick at first kind of horrified by the off-the-record things Jessica is asking him to do, or is he like, “Oh, I’ve been waiting my whole life for somebody to let me do this stuff”?

GOREE: It’s definitely the latter. He’s someone that’s been wanting to do something and make a difference, and he’s stuck in this city politics position, where he’s at the lower end of the totem pole, and he wants to make a difference. And there’s a lot of room to do that, but the people that are above him are politicians. And so they’re toeing the line. And so when Jessica comes in, she’s like a wild card, and he sees her as a possible ally that can move the needle and really make an impact. So I think he’s thrilled when she first comes in.

AX: Does Derrick feel any loyalty towards the Mayor?

GOREE: Absolutely, and I think he sees himself as someone who needs to help the Mayor to do the things that he said he was going to do, and break out of his shell and overcome some of his inhibitions. Now, I think he’s a little naïve. He doesn’t realize that there are reasons why the Mayor isn’t doing more, and that he, as all politicians do, has other influences, let’s say, and other agendas. So he doesn’t really yet see all the angles, and I think he’s kind of disheartened with Jessica, when he realizes that she’s not ready to just jump on his optimistic, millennial let’s-change-the-world bandwagon, that she knows that there’s a process to things.

AX: Does Derrick see Jessica as a possible romantic interest?

GOREE: And in the trailer, did you see when she stops the elevator? Her delts are just like diamonds. They are unbelievable. She is in some crazy shape. She looks ageless, she’s gorgeous. I think she’s looking for a more mature man that Derrick. I think he’s a little wet behind the ears. 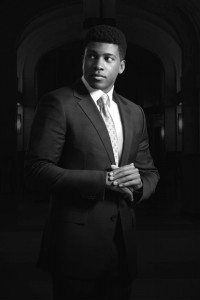 AX: PEARSON is set in Chicago, but it’s shot mostly in Los Angeles …

GOREE: Yes, for the most part. We do a little in Chicago as well.

AX: Has swapping out cities ever led to physical discomfort, when you’re dressed for the kind of weather it’s supposed to be in the story, but the temperature on set is actually something else?

GOREE: Yeah. We had to go [to Chicago] in September for a little while to shoot some exteriors, and it was already getting pretty chilly. We had a rooftop scene, where I felt really bad for Isabel [Arraiza], who plays Yoli, because she had to act as if it was summertime, so she’s wearing a regular blouse and business attire, and it’s freezing up there, and we have at least our business jackets on, so we are a little warmer, and all you hear from behind the camera is our director, Kevin Bray, screaming, “Isabel! You look cold!” And she’s like, “Yeah, I am cold!” He’s like, “Don’t look cold! Action!” [laughs] So it can get tricky, but we find ways.

AX: Before getting PEARSON, were you doing any writing, because you were saying you had created a character you want to play …

GOREE: Yeah. I do some moonlighting as a producer, and I’ve produced some shorts and some digital media stuff, I have a slate of different other features and television projects that I’ve developed as well, that I’m looking to get produced and further developed and sold, but yeah, that’s definitely something that I’m very interested in. It was actually really cool to hear Gina talking about how that was an ambition of hers throughout her acting career, to graduate as an artist into being a producer, because that’s definitely where I see myself going as well.

AX: And what would you most like people to know about PEARSON?

GOREE: I think that PEARSON is such a great combination of being its own show and a spinoff. Shows that I always loved – this is a totally different genre, but shows like THE JEFFERSONS [an ALL IN THE FAMILY spinoff], shows that were spinoffs, but you still knew it was its own thing, you didn’t need to connect it to anything else. That’s what I feel like PEARSON has accomplished. Even with the name – the name was something that was going around for a little while, people didn’t know what it was going to be called, and I think they nailed it. Because if you call it SUITS: CITY HALL, it’s not really its own show, and if it does well, it’s okay, but it’s just SUITS. It’s like CSI: MIAMI – really, you just think of it as CSI. That’s not to discredit CSI. But this way, whatever PEARSON does, it does it on its own merits, but at the same time, it says to the audience that knows SUITS, “It’s still her name on the door. It’s that DNA, it’s the SUITS DNA.”

This interview was conducted during USA Network’s portion of the Television Critics Association (TCA) press tour.