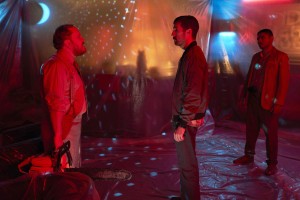 FX’s SNOWFALL, now in its third season on Wednesday nights and renewed for a fourth, is a drama that chronicles the catastrophic convergence of drug dealers and the CIA in South Central Los Angeles during the 1980s.

SNOWFALL was created by Eric Amadio, the late John Singleton, and Dave Andron. At the outset, Singleton brought in best-selling novelist Walter Mosley to come aboard as a writer/producer.

Mosley has created a number of iconic series of mystery novels, including those featuring his protagonists Easy Rawlins and Leonid McGill. He won an Edgar Award for his novel DOWN THE RIVER UNTO THE SEA, and was named a Grand Master by the Mystery Writers of America. While Mosley has scripted several plays and has had several of his novels, including DEVIL IN A BLUE DRESS adapted for the screen, SNOWFALL is his first time as part of a writing staff.

Asked about his friend and colleague Singleton, who died April 19 following a stroke, Mosley shares the following with a group of reporters. “I think that John was such a funny guy. He was completely committed to South Central. He was born there, he was raised there, he lived there, his business was there, and his stories were about there … I think that there is kind of a nonverbal thing to John, and a love of South Central, and a love of filmmaking that made him different, and really a genius at telling stories through images.”

As to Franklin Saint, the young SNOWFALL protagonist played by Damson Idris, Mosley says that although the character commits a number of bad actions, “Honestly, he’s not a psychopath and never will be one. Right now, he’s very young. He’s involved in a business that he doesn’t really understand and hasn’t really seen. He has a lot of feelings about things to do, but as you can see, his life is so emotionally complex that he can’t maneuver all that easily. Of course, the question to ask is, ‘Is the CIA a victim of psychopathology?’ I think that might be more likely.”

In a one-on-one follow-up conversation, Mosley talks more about his work on SNOWFALL, as well as how he gets so much writing done in so many fields.

ASSIGNMENT X: Was John Singleton a fan of your writing? Is that how you initially came together?

WALTER MOSLEY: I think that John did like my writing, and we met, and we got to know each other quite a few years ago. So yeah. He did read all my books, and he gave away a lot of my books to people.

AX: Was SNOWFALL the first time you’d been asked to be part of a writers’ room, or you hadn’t wanted to do it before, or …?

AX: How do you manage your writing schedule? Do you work on books at the same time you’re working on SNOWFALL?

MOSLEY: Yeah. I work [on fiction] in the morning when I wake up. And the writers’ room doesn’t usually start until like ten, eleven, and I wake up at four or five, so I do my three hours of writing, do some exercise, go to the writers’ room.

AX: Do you look at the characters in SNOWFALL as people that, say, Easy Rawlin might investigate in another world?

MOSLEY: Hmm. I’m not sure if he would investigate them; he might be set against them.

AX: But do they feel like the sort of people who would exist in the novels that you’ve been writing already?

MOSLEY: In the future of the stuff I’ve been writing already. Or in the past. Because I have Leonid McGill in the present, I have Easy before, and this is in between.

AX: Have you learned anything interesting to you in the course of doing research for SNOWFALL, like the stuff about the CIA, or was that stuff you knew already?

MOSLEY: Most of it I knew already, which is one of the reasons that John asked me to be a part of it. There are all of these little details that are, “Oh, I didn’t know this particular piece of information.” But in general, I knew we were fighting a war in Nicaragua, I knew we were raising money in the ‘hood, and lying about it. I knew that. And it is fiction we’re doing. Our show doesn’t really do the details of how crack came to L.A., so who knows that answer? But crack came to America, and it made its way to Los Angeles. But I knew that. And I knew about the CIA and I knew about the involvement in Nicaragua, so all of that was that kind of information that you think everybody knows, but then it turns out nobody does. 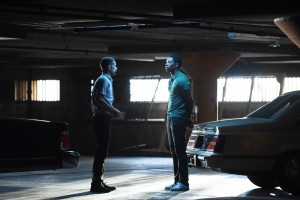 AX: They’re both there all the time.

MOSLEY: Yeah, hand in hand, all the way through it.

MOSLEY: Working on a movie based on A MAN IN MY BASEMENT, being produced by this English company, working on a film with Sam Jackson about my book PTOLEMY GREY. I have next month a book coming out called ELEMENTS OF FICTION, and in January, I have a Leonid McGill mystery called TROUBLE IS WHAT I DO, and in June of next year, I have a collection of short stories coming out called THE AWKWARD BLACK MAN, and a year from January, I have the new Easy Rawlins, called BLOOD GROVE.

AX: And what would you most like people to know about SNOWFALL?

MOSLEY: It’s a show that everybody needs to know, because it’s a history that has gone by them without being reported.