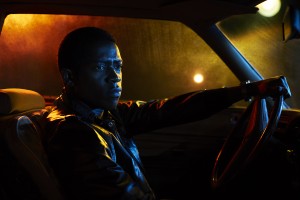 FX’s SNOWFALL, now in its third season Wednesday nights and renewed for a fourth, deals with how crack cocaine use became so prevalent. Set in 1980s South Central Los Angeles, SNOWFALL stars Damron Idris as Franklin Saint, a successful young dealer who is feeling increasing pressure from all sides, including the FBI, but does not – yet – recognize the damage his product.

Dave Andron, formerly an executive producer/writer on FX’s JUSTIFIED, is one of the co-creators of SNOWFALL with fellow executive producers Eric Amadio and the late John Singleton. Andron talks with us about how SNOWFALL’s story may go forward, as well as working with Idris, writer Walter Mosley, and making a TV series on location in South Central.

Andron says he doesn’t believe that Franklin is a psychopath, despite his ability to look away from the fallout from his burgeoning drug enterprise. “I don’t think he is there yet. I don’t know if he’ll get to that place … Certainly, up until that [confrontational] moment, he had been so driven to figure out if he could succeed on this level and could build the thing that he hadn’t stopped to wonder what it was going to do and what the damage was going to be, because nobody could have foreseen what crack was going to do to the community. I don’t, in my heart, believe that if he knew what it was going to end up as, he ever would have started down the path. But he genuinely didn’t know, and nobody knew. And that’s a lot of what this season is about, is people having to start to wake up to the reality of the consequences of what this is going to be.”

ASSIGNMENT X: You’re in Season 3 and you’ve been picked up for Season 4. How long can SNOWFALL run, both in terms of seasons and in terms of the years the story covers, before you come to the end of what is being discussed in the series?

DAVE ANDRON: I felt like we needed five [seasons], frankly, to tell the story that we wanted to tell, the way we wanted to tell it. As we get a little more granular with things, there might be a sixth. I don’t know how far past that. The take was that the story was always the transformation – how did a working-class black neighborhood go to being a bombshell crater in a period of three years, or whatever it was. And that transformation is what we were fascinated with. At a certain point, we have BOYZ N THE HOOD, we have a lot of art that has been made about what the world became as we came to know it. So we just have to identify the point at which that transformation has gotten to the place where we all understand the ins and outs of how it got to that place, and then I think we’ll call it.

AX: So the story could go for another four years in terms of the amount of time the narrative covers, but at the rate you’re telling the story, you could actually then go for a number of seasons to deal with all the ramifications during that time?

ANDRON: Yeah. I think once you start to examine the response of the community, because as [consulting producer/writer] Walter Mosley points out, there are characters and their arcs, and then there’s the response of the community, and at what point will we decide it’s better to jump forward two years, as opposed to the three-to-six months jumps we’ve been doing in between seasons.

AX: What year are we in right now on SNOWFALL?

ANDRON: We’re in the summer of ’84 in Season 3, and the Olympics are happening in the background, although you can’t say the word “Olympics,” or show any rings, which makes it tough to portray the Olympics.

AX: So you’re just suggesting the Olympics with terrible traffic?

ANDRON: Terrible traffic. And smog. Smog was much worse than now. So we take this season into the fall of ’84, and then next season, we’ll get into ’85.

AX: Your lead actor, Damron Idris, sounds like an L.A. local when he plays Franklin, but he is in fact from London, England. Do you know how he nailed his American accent? And how did you come to cast him?

ANDRON: Part of it is, and this had never quite occurred to me, as obvious as it is, [British people] grew up watching our movies, so they have an amazing American accent by the time they’re ten and twelve years old, because they grew up on our movies. Which is why we don’t have maybe the greatest British accents, we don’t grow up on that so much. It was really for us how powerful and great Damson is. He’s so undeniably good – we looked at a lot of people and had a lot of discussion, and John was initially very much opposed to casting a Brit, and it was not an easy choice. But Damson ultimately – you’ve just got to take that kid. He’s unbelievable.

AX: Speaking of your late colleague John Singleton, FX Networks put together a very moving tribute video for him, which was shown at the SNOWFALL Q and A panel for the Television Critics Association. Do you know if there are any plans to release that video to the public?

ANDRON: They do a really wonderful job. I’m not sure if they plan on putting it up on the social media on any of our sites. I know that there’s another docu-tribute that they did to him, through the prism of our show and our cast and crew that is up on Facebook, and is also, I find, very moving.

AX: Walter Mosley is an extremely successful mystery novelist, who is most famous for his post-World War II crime fiction set in and around Los Angeles. What does he bring to the writers’ room?

ANDRON: Everything. Honestly, for a guy who has written mostly books, his story sense is wonderful, and his sense of character, and his imagination, so he brings you all that. And then his attitude daily. He brings the life experience, and having been around for it, and deep in it, and knowing the players. I just love the guy to death. There are people you take away from jobs who change things. Walter’s been a blessing. John [Singleton] obviously made the initial call to get him to come in for the first room, but then it became, would he enjoy it? And would he keep doing it? And would he enjoy being in a room for all those hours every day? But he has. It’s been really wonderful for us that he enjoys doing it, and wants to come back and do more of it.

AX: How has South Central greeted the SNOWFALL production company?

AX: So the Crips and the Bloods have sort of a truce around where you’re doing scenes?

ANDRON: Yeah. They have no drama, knock on wood. But that’s a serious concern, and it’s still real down there. We’ve had people who’ve done wonderful jobs on our crew making inroads with them, but then, everybody has embraced it, everybody wants to be a part of it. We’re telling a story that nobody’s told.

AX: And what would you most like people to know about SNOWFALL?

ANDRON: I most want them to know that this is a real story about real people, and there’s value in it, and that it gets better every episode.