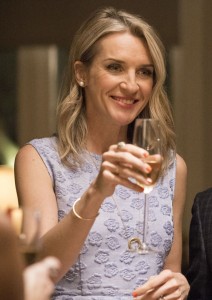 In MARVEL’S RUNAWAYS, now streaming its second season on Hulu (the first season is also available), things have heated up between the title teens and their parents. In Season 1, the title characters – six well-to-do Los Angeles area teenagers – discovered that some of them were geniuses and others had actual superpowers. They also learned that Pride, the supposedly charitable organization that all of their parents belonged to, was actually a nefarious cult that was engaging in some possibly world-ending activities. This caused our heroes to, per the title, run away.

The situation among the parents was already pretty fraught even before their children took off. Ever Carradine plays Janet Stein, mother of Chase (Gregg Sulkin) and wife of Victor (James Marsters). Janet was having an affair with also-married fellow Pride member Robert Minoru (James Yaegashi). After Pride cured Victor of a brain tumor, Janet broke off the affair. However, Victor’s already changeable personality grew more dangerous, and Janet wound up shooting him (he starts Season 2 in a coma) to prevent him from killing their son Chase.

Annie Wersching plays Leslie Dean, wife of Frank (Kip Pardue) and mother of sometimes glowing and flying Karolina (Virginia Gardner). Karolina’s father is actually the mysterious and long-lived founder of Pride, Jonah (Julian McMahon). Leslie doesn’t entirely trust anybody, and she may not have her child’s best interests at heart.

Carradine, part of the Carradine acting dynasty, has been working in film and television since she was twenty-two. Notable credits include JAY AND SILENT BOB STRIKE BACK, ONCE AND AGAIN, LUCKY, COMMANDER IN CHIEF, 24, EUREKA, MAJOR CRIMES, GOLIATH and THE HANDMAID’S TALE.

Wersching is known to 24 fans as the tormented Renee Walker. The actress played another troubled law enforcement character on BOSCH and has also recurred on EXTANT, CASTLE, THE VAMPIRE DIARIES and TIMELESS.

On the gleaming, high-tech set for Prime headquarters, Carradine and Wersching talk RUNAWAYS – plus a previous costarring gig.

EVER CARRADINE: We were in 24 together. I think [my character] was boffing Rhys Cairo.

ANNIE WERSCHING: She got killed in the back room at the beginning of my first season.

ASSIGNMENT X: This is not meant as flattery, but as a genuine question. You were on 24 in 2009 and 2010, but you actually look younger on RUNAWAYS than you did in 24 …

AX: Did the producers do something? Is this meant to tell us something about Leslie?

WERSCHING: No, I didn’t do anything. I just add more blush. [laughs] 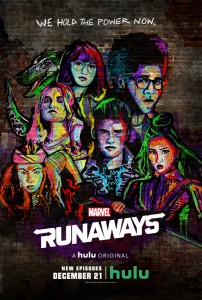 AX: All of the couples on RUNAWAYS are having their ups and downs, but Janet would seem to be in one of the most conflicted marriages on the show …

CARRADINE: I think that’s a deep marriage conversation. But I think marriage is complicated, and I think that everything always starts with love, and then it gets a little trickier and more complicated as time goes on.

AX: Did Janet autonomously join Pride, or did she just think, “Okay, Victor is doing this, I’ll go in”?

CARRADINE: I think my answer is, we all came in as couples. I think it was all a husband-and-wife [group], and then you learn a little bit in Season 1 that Frank maybe was in Pride, and then isn’t in Pride anymore. Didn’t we all come to Pride as couples?

WERSCHING: I don’t count. Mine is different [because of Leslie’s prior relationship with Jonah].

CARRADINE: Yours is different. I feel like Pride is all teams. Otherwise, Pride would have been ten random people, as opposed to couples.

AX: And how do you enjoy working with Gregg Sulkin, who plays your son?