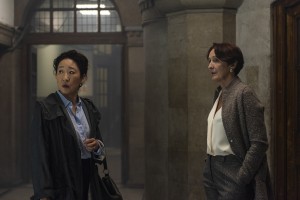 Fiona Shaw portrays Eve’s boss, the mysterious, hard to startle Carolyn Martens. Shaw, who works in all mediums – she was a Tony nominee for her performance in the 2003 Broadway production of MEDEA – first made an international impression in the film MY LEFT FOOT. HARRY POTTER film fans will recognize her as Petunia Dursley. Some of Shaw’s many other credits include Terrence Malick’s THE TREE OF LIFE, TRUE BLOOD, and CHANNEL ZERO: CANDLE COVE.

Admirers of Shaw’s performance in KILLING EVE might be even more impressed if they could see and hear her in person. Her real-life manner and voice – Shaw hails from County Cork, Ireland – are entirely unlike her steely, absolutely British persona as Carolyn.

ASSIGNMENT X: How do you see Carolyn Martens? How would you describe her?

AX: Well, Carolyn is very different than you, so how do you feel when you’re in her?

SHAW: I jettisoned everything that I ever did in acting to play Carolyn. I came at it literally through another door. I didn’t in any way use any tools I thought I knew. I absolutely upended myself to play Carolyn. And she’s not like me at all. She’s not like my natural energy level. And it has been utterly transformative to play her. I have had to hold my nerve playing Carolyn. But the great joy is that the audience adore it, and I’m thrilled I’ve done that. 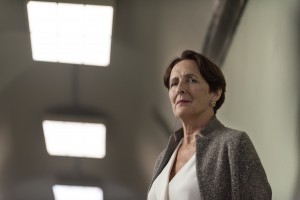 AX: When you first got the role of Carolyn, did you think about what you should sound like at all? Because her speaking voice is not your speaking voice, although you have played a lot of English people who speak with received pronunciation accents.

SHAW: She has to be that, because she is absolutely packaged as part of the British hierarchy. And she’s a particular kind. I suppose she’s an Oxford graduate, at least. So she’s absolutely come up through the system. And to be in the Civil Service in England, you do have to come up pretty well through the system. That has been the tradition of it. And you have to be a British subject. So she is all of that. And then she’s everything else [that she is] as well.

AX: At the end of Season 1, both Eve and Carolyn’s spy son have both disobeyed Carolyn’s orders, so how annoyed is she at the start of KILLING EVE Season 2?

SHAW: Carolyn isn’t that annoyed. Everybody thinks she’s going to be very annoyed. In fact, Carolyn is efficient. I asked Emerald [Fennell], who’s written the second season, how she saw Carolyn. I don’t think this what Phoebe necessarily would have seen. She said, “I think of Carolyn as a shark.” Now, a shark sounds violent, but I think it’s more about the efficiency. Carolyn is efficient, and I don’t think wastes her time on too many petty human emotions that get in the way of the thing that she wants to do.

AX: We also learn that Carolyn has been sexually involved with quite a few men of both friendly and hostile nations. Do you feel that Carolyn specifically likes these particular men?

SHAW: I’m sure she likes these particular men. If you’re asking are there more, you have to wait and see. The way it’s written is that you have an expectation that the senior member of MI-6 who runs the Russian desk would be very modest in her sexual tastes, but there’s no reason she should be.

AX: But do you think she’s also been using sexuality to get information and influence, or is she doing it for the fun of it?

SHAW: I don’t have any more information than you do, except what I think. I think lots of things, but they may or may not come to pass. As I said, I upended how I normally think about things. I think there is something about Carolyn – she understands the instability of life, and embraces it, which is why she’s very successful. She’s also unsuccessful. She’s also human [laughs].

SHAW: I think Carolyn is so high up the chain that the machinations that go on in the offices, that you enjoy watching, she is not interested in these things at all. She’s on a different rhythm to everybody else. She doesn’t care who falls out with who in the office, and who gets on with who. She’s on another game, some of which is connected to other games that none of you even know, like other countries, or wars, or disturbances that are going on in Africa, or Asia. So she’s tying up a string at such a level that, really, the KILLING EVE aspect of her life is just a dusty cul-de-sac.

AX: In terms of on-set, do you enjoy the dynamic of getting to work with other women this much?

SHAW: Oh, yeah. We all enjoy it. You can tell we all get on very well. We’re having a ball, because Phoebe was there initially, and she was great fun, and of course had a huge amount of insight into what she had written. And Emerald picked up the gauntlet. But by Season 2, I suppose we all feel we own the characters more. And that’s been very, very good, because we can all discuss the upending of each scene, we understand what’s going on, and the kind of things that need to be consistent, and the kind of things that do not need to be consistent. But that’s to undo the car. You don’t want to undo the car. It’s a Rolls-Royce.

AX: Do you have input into the character?

AX: A certain amount of Season 1 takes place in Russia. Where did you shoot those sequences?

SHAW: We went to Bucharest, which was very interesting. We were going to go to Russia, we were going to go to Moscow, and I think we couldn’t get permission for Red Square or something, so we went to Bucharest. We had a hotel just opposite where [former Romanian dictator Nikolai] Ceausescu had his last day, where he escaped from the helicopter and then was killed. And that was just the square. And we also had an amazing tea room, which was a very famous tea room, which was used as a Russian tea room at the end of the first season.

AX: You’ve worked with KILLING EVE creator Phoebe Waller-Bridge on her other series FLEABAG. Was that before or after you started working on KILLING EVE?

SHAW: After. I’ve just recently done a bit of FLEABAG with her. So my first go with Phoebe was on KILLING EVE, and she is quite a genius, because she’s captured a kind of classical structure and turned it on its head, obviously. I think she’s like Van Gogh and how he’s turned olive trees – you can’t look at an olive tree straight now without thinking of Van Gogh, and you can’t look at any woman straight without thinking of Phoebe Waller-Bridge, and what she might do to virtue, or morality. She’s great.

AX: Phoebe Waller-Bridge also stars in FLEABAG and wound up having to work on that while Season 2 of KILLING EVE was getting made, so Emerald Fennell took over as show runner on the latter. Is there much of a change in KILLING EVE for you between Seasons 1 and 2 with the different show runners?

SHAW: Well, you must talk to Emerald about this, but it must have been very, very hard. Maybe it deepens. But you also have plots that drive the thing. I can’t say if it’s going to be the same. It isn’t the same. But the nature of the beast is that it upends itself, so sure enough, you’ll be upended [laughs].

AX: You do stage, you do television, and you do film, so when you take a project, is it just a matter of liking that particular project, or do you actually like to bounce between all of the mediums?

SHAW: I did THE TESTAMENT OF MARY on Broadway [in 2013], and then I did it at the Barbican [in London] the year later. And then I went to BAM [Brooklyn Academy of Music] with THE ANCIENT MARINER. And all of that is five years ago. I’ve been doing only screen since. So I’ve been having a sabbatical from the theatre for a bit, which I’ve really enjoyed.

SHAW: I’ve done an amazing series called MRS. WILSON [currently airing in the U.S. Sunday nights on PBS’s MASTERPIECE], with Ruth Wilson. Ruth Wilson’s grandmother died, leaving a memoir which showed that she had been part of a bigamous marriage, where her husband had four wives. And I’ve also directed an opera for Glyndebourne [in England] called CENDRILLON [a version of the Cinderella story, which will be part of the Glyndebourne summer season this year], by Massenet. They were my two projects that I’ve just done. And I’m about to start filming a film called AMMONITE with Kate Winslet and Saoirse Ronan. That’s set in the nineteenth century, in Lyme Regis [England].

AX: And what would you most like people to know about Season 2 of KILLING EVE?

SHAW: Just that we’re all in it together, and I hope they enjoy it as much as we enjoy it. I get sent series, where you know you’re playing this character who will probably do this and this in the next scene. [On KILLING EVE], we don’t know. That’s exciting.

This interview was conducted during AMC and BBC America’s portion of the Winter 2019 Television Critics Association (TCA) press tour.