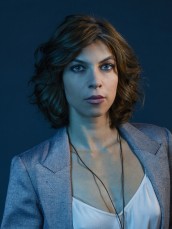 The actress chats about her new series and more 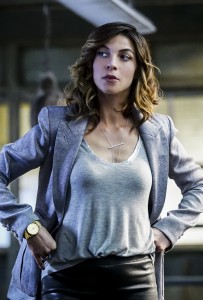 In CBS’s Sunday-night drama WISDOM OF THE CROWD, Jeremy Piven plays tech billionaire Jeffrey Tanner. After his daughter is murdered, Jeffrey walks away from his phenomenally successful company to concentrate on a crime-solving crowd-sourced algorithm. It’s meant to catch the killer, but it winds up helping solve a lot of other cases as well.

Natalia Tena (pronounced, she says, TEN-ah) plays Sara Morton, Jeffrey’s business and romantic partner. The English actress is recognized all over the world for playing the Wildling Osha in GAME OF THRONES and Nymphadora Tonks in the HARRY POTTER franchise (and, it turns out, for a few other things, too). Tena is also lead singer with the band Molotov Jukebox and plays the accordion.

ASSIGNMENT X: Were you looking to work in American television?

NATALIA TENA: Yeah. I came at pilot season. I always did it [pilot season] in England, but I never got anywhere, and then I came here. When it was face to face in a room, I did better, and obviously, I got this job. I’ve always wanted to work here. I’ve only been here since the seventeenth of July. It’s been very scary [laughs]. I’ve got my own place and they’ve introduced me to Target, so that’s saved my bacon. So yeah, I’m very excited.

AX: What can you say about your character Sara Morton?

TENA: She is a capable, highly intelligent woman, with a huge set of ovaries, in a relationship with this man. Her technological IQ is leaps and bounds beyond mine. That’s why I wanted to play her. I want to play someone that clever, who understands those words.

AX: Have you done any research for the role?

TENA: What do you mean?

TENA: No. What I did is, I think I based my character on two people I know very well, and then around that, obviously, when I don’t understand a word, someone explains it, but I think it’s more about going for who the character is, and not so much all the time some of the clever stuff they say, like, what’s her through-line. And I’ve drawn inspiration from two people I know and melded them.

AX: Obviously, social media is a big part of WISDOM OF THE CROWD. How do you feel about it in the real world?

TENA: I only use Twitter. Twitter is what you put in it. I’ve been very lucky – I’ve only ever had one person say something horrible to me on Twitter, and someone showed me how to block it, because I’m technologically awful.

AX: When fans come up to you, do they want to talk more about HARRY POTTER GAME OF THRONES?

TENA: It depends where I am. If I’m in Spain, it’s usually about a film I did, 10,000 KM, and the new one that’s coming out called ANCHOR AND HOPE by the same director, Carlos Marques-Marcet, but it depends where I am, or what the age group is. Older people tend to like GAME OF THRONES more, obviously. I’d say under-twenty-five, HARRY POTTER.

AX: WISDOM OF THE CROWD deals broadly with the public good. Is there a charity organization that you particularly support?

TENA: Yeah. I don’t know if it’s only in the U.K. – Orchid is a charity that tries to stop female genital mutilation, so our band, Molotov Jukebox, we crowd-funded our last two albums, and all the proceeds went to that. I think it’s disgusting that just because you’re born with a vagina, you don’t have equal rights. And the fact that they try and strip away a woman’s power and identity by taking away that – I’m not a diplomatic person, and I want to give money to people that can in a diplomatic way end it, because for me, it just fills me with rage, and that’s not going to help anything. Also, Women’s Aid, that’s a big thing that I’m utterly into. And because I’ve just moved, I want to volunteer for dogs and cats. It’s hard, because I tried to join domestic violence groups for women, but that you need proper training. And I tried to volunteer for hospice stuff as well, because I was like, “I play the accordion, I can go to play music for people,” and they were like, “You need to do training.” There’s never been the right moment to run off, because every time I do, it’s like, “Oh, you’ve got to go and do a job in France.”

AX: You mentioned that you play the accordion. How did you settle on that as the instrument you wanted to play?

TENA: Ah. I’ve played the piano my whole life, I started very young, and then I got sick of it because grades and that kind of classical training can take out the joy. I only wanted to learn it because I wanted to do rock ‘n’ roll. And it killed that. I vowed I’d never touch a piano again at eighteen, and then I worked at a theatre company called Knee High, and I played this trapeze artist, and all the actors had to pick an instrument. I saw the tiny accordion. It was love at first sight. I was like, “Yeah.”

AX: And what would you most like people to know about WISDOM OF THE CROWD?

TENA: I think it’s a highly innovative series. It’s great for anyone who’s a whodunit fan, which I am – I love Agatha Christie and all that stuff – but with that added layer. It talks about things that are relevant right now. It’s kind of the brighter side of BLACK MIRROR. It shows the darker side of what technology can be. I think this is showing the positive things that it could do.