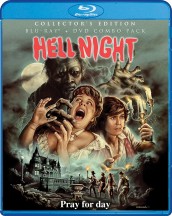 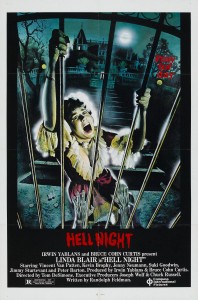 As most of the classic and cult 1980s horror films have been given their Blu-ray special edition due, there are still a handful of leftovers yet to see the high-def light of day. Thankfully, Shout! Factory (via their Scream Factory label) has knocked another one of those Holy Grail titles off the list with 1981’s HELL NIGHT.

Produced by Compass International Pictures (responsible for 1978’s HALLOWEEN and later cult faves 1980s FADE TO BLACK and 1981’s BLOOD BEACH which are still long overdue for a Blu-ray upgrade as well), HELL NIGHT has many of the early ‘80s slasher movie tropes but also experiments with the formula as well in some engaging and clever ways.

The basic premise has four pledges for Alpha Sigma Rho forced to spend a night in the supposedly haunted Garth Manor. Murders happened in the residence and it’s rumored one of the deformed tenants still roams the grounds looking for easy prey.

Linda Blair plays book smart Marti who is paired up with rich kid Jeff (Peter Barton) while surfer dude Seth (Vincent Van Patton) hooks up with naughty but nice girl Denise (Suki Goodwin). There isn’t supposed to be any crazy people in the house – all of it is engineered by the head of the sorority to scare the pledges. Of course, everyone is dead wrong – and people soon find themselves dying at the hands of a mysterious assailant.

It’s best not to poke holes in the film’s story. If you start wondering how the sorority managed to trick out the house with a sound system, a rear projector, fake skeletons, etc. and not run into the house’s violent protector the first time around, the whole film’s premise falls apart.

That said, there’s an innocence to the film’s proceedings. It’s slower paced than most slasher films, and tries to build up the character’s to be more than just standard, sexaholic archetypes. In fact, despite all having obvious stereotypical labels, each character has some admired charms and depth. In particular the Denise character may like to party, but she’s not as annoying or vacuous like she could have been. Same goes for Seth who starts the film off as most likely to get killed first and ends up being given a pretty awesome and wholly unexpected subplot in trying to save the day.

Defying the cliché expectations is where HELL NIGHT really excels, but when it comes time for pay-offs, the film stumbles. There’s a lot of earned suspense, but then when all hell breaks loose, director Tom DeSimone and writer Randoph Feldman have the characters do incredibly stupid and asinine things.

Remember the “don’t think too hard category.” There’s a sequence where one of the characters struggles to climb a supposedly impossible to climb fence, leaving his friends behind to get help. When he needs his shoes, they’re tossed over the fence as if it’s six feet tall, making you question – why didn’t all of them just try to climb over. It’s the vagaries of low budget, and again, questioning horror movies and motives is always low hanging fruit when it comes to critiquing, but when a film actually had tons of potential like HELL NIGHT, the missteps are all the more frustrating. 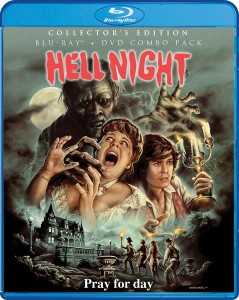 Performance wise, all the actors do a solid job and kudos to the make-up effects (and editing team) for coming up with some credibly clever and fun in-camera tricks. There’s a shocking beheading that still holds up quite well, even though a watchful modern day eye can catch the trick pretty quickly.

I think one of the reasons HELL NIGHT has not had a proper High-Def release is the lack of a good print to scan. It says as much with a special message before the film begins. Shout! Factory hunted down the best print, restored it the best they could and also had to add back in some standard def elements to fully restore the film. The end result is a rather hit and miss print marred at times from color jumps, black pops and green lines. It’s a minor distraction and being made aware of it ahead of time certainly prepares you for the uneven quality. Nonetheless, even with the imperfections, the movie still looks better than any previous home entertainment release. If it comes down to having the movie available on Blu-ray or never having it at all, I’ll take this version over not having it all.

Additionally, Shout! has prepared some great new special features. Interviews and commentary with some of the cast and crew including Blair, the film’s director and producer Bruce Cohn Curtis. There are TV spots, trailers and a lengthy special feature on the “kills” in the film.