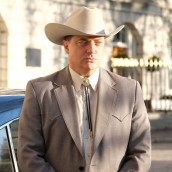 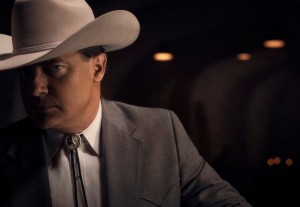 Brendan Fraser plays investigator James Fletcher Chace, who is dedicated to finding the missing young man; Chace also narrates TRUST. Fraser’s feature career encompasses comedy (AIRHEADS, BLAST FROM THE PAST), drama (GODS AND MONSTERS, THE QUIET AMERICAN, CRASH) and blockbusters (he’s the star of THE MUMMY adventure franchise). He will also be seen soon in AT&T Audience Network’s spy thriller series CONDOR as the casually homicidal Nate Fowler. Based on the 1975 feature film THREE DAYS OF THE CONDOR and the James Grady novel that inspired it, CONDOR debuts Wednesday, June 6.

At a pair of Q&A panels and in a private discussion, Fraser discusses his upstanding role in TRUST and his reprehensible character in CONDOR. A fan of Chace’s style, Fraser wears the man’s cowboy hat and boots throughout.

ASSIGNMENT X: Did you know any of the story of TRUST at the time that you got the project?

BRENDAN FRASER: Not much. I mean, I knew the name [Getty] through philanthropy and entities, and all kinds of financial institutions, but I didn’t know the family’s dynamic at all.

AX: Have you played any detectives before?

FRASER: I watched a lot of COLUMBO growing up [laughs]. “I have just one more question …”

AX: How would you describe Chace in TRUST?

FRASER: He’s a man with a textured past. He’s on a journey of redemption. He wants to rescue this kid for personal reasons outside of just being beholden to his boss, the richest man in the world. I approached this from the boots and belt and hat up. I wanted to show that he really cares. He cares about the [Getty] family. He cares about [the kidnap victim’s mother] Gail [played by Hilary Swank]. He’s not just an employee of this Midas character. And he also should use the impression of being flamboyant, I’m not sure that was my choice, but [if not flamboyant, then a] broad American stumbling through Rome to his advantage to try and cull the best information to try and solve the mystery of what really happened. I say this because everything I needed to know was right there in the episodes, in the screenplay, thanks to what Simon [Beaufoy] has written. I know I can speak for myself, and for all my cast mates; he wrote a story that allows everyone to have a sense of parity as an ensemble. It’s a story that is not so much about the singular Getty family, but [also] everyone who orbits it.

AX: How would you describe Nathan in CONDOR?

FRASER: He’s a nasty little piece of work in my view, but I can’t taint the choices that I make [as an actor] with my own view. He has a grand scheme plan of taking down an enemy that he perceives as being an act of righteousness, and sees it as [something that] will enable him to reconcile with his father. I say that because each of the characters in this expansive cast all have rich back stories that drive the choices that they make, that we all may think in watching this spy thriller are quite nefarious. But it rounds them out as being people, just like myself and you, who feel that while they may be involved in what we see as being dastardly, they don’t know that they’re despicable. Any villain never would. I found Nathan Fowler to be interesting because he’s part of the military industrial complex. He’s not getting his hands dirty outside of digging a hole to put some rodents into that had been tested upon, and makes choices that could have world-changing consequences. I found this interesting, because it’s a counterpoint to, I think, a lot of the choices that I’ve been asked to make in the scope of my career. And I find it exciting to be able to work in the format of episodic television to pay off the arc of a story throughout the span of episodes, almost like chapters in a novel would do, rather than the challenge of working inside of one hundred and ten, one hundred and twenty minutes, whatever a feature film would be. So it was mostly satisfying for me, and my challenge was not to do any mustache twisting. But keep watching.

AX: What would you most like people to know about TRUST?

FRASER: The adage on the script when it was circulated at first said, “Only the unbelievable parts of this story are true.” And I wrote that in my script binder. It was on Episode 1. And I think that held up. It’s more than you would expect. And just because they’re rich and despotic – well, they’re not despots, really, but they are dysfunctional – then again, they call that “family” in England, I learned. When you place too much value on money and not enough on people, this might be what happens. I don’t know enough about the reaction to the show, but I would take an educated guess at this early stage that it might remind people of themselves and their families more than they would admit to.

This interview was conducted during FX Networks and AT&T Audience Network’s portions of the Television Critics Association (TCA) press tour.