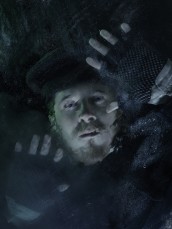 The actors talk about the new AMC series 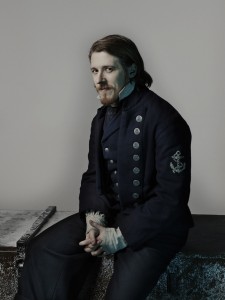 In AMC’s Monday night limited series THE TERROR, based on Dan Simmons’s historical novel, two ships full of British Navy explorers find themselves trapped in the Arctic ice. As the events take place in the mid-nineteenth century, the vessels the Terror and the Erebus have no means of calling out for help, even before their crews find themselves stalked by a possibly supernatural entity.

Nagaitis and Nielsen sit down together for a talk about their adventures in THE TERROR.

ASSIGNMENT X: You’re primarily a composer/musician/singer, so what led you to join the cast of THE TERROR?

NIVE NIELSEN: I really always enjoyed every opportunity I ever had to do some acting. I’ve been doing so many other things that it hadn’t really been happening on its own, but when this opportunity came, I was more than excited to do it. So I’ll definitely do some more acting, if it’s possible. Mostly, I’m a musician, so I travel with my band all the time, and that’s what I’ve been doing for the last few years, pretty much. So this is a change, but also a lot of things I think are pretty similar. And I actually don’t think I could have done all this acting if I hadn’t been playing music for this long, and actually gotten used to standing on stage, and having people stare at you, and thinking that’s normal [laughs].

AX: Fairly early on in the series, Cornelius Hickey is doing something in the back of the ship’s stockroom with fellow sailor William Gibson, who’s played by Edward Ashley. Are they doing what they seem to be doing?

ADAM NAGAITIS: They were certainly having a bit of fun. Edward and myself did different things every take, but certainly, the characters are sexually engaged, if that’s what you’re asking. They’re absolutely lovers, yeah.

AX: Is the relationship romantic, or because one or both of them is trying to get something from the other in terms of the crew hierarchy?

NAGAITIS: No,[Hickey] is  devoted to the relationship with Gibson. And see in Episode Three, we see how much that relationship means to him. Certainly, as the show moves on, we see what that relationship really means. I think, like everything, it may have begun as one thing and morphed into something else, it may have been purely for convenience and pleasure to begin with, and then naturally, as you would, you develop a fondness, or maybe fall in love, but yeah, he cares for him. 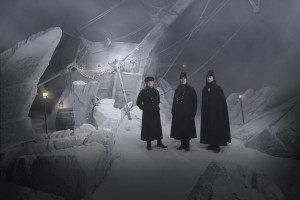 AX: Hickey seems to be keeping some secrets …

NAGAITIS: There are many secrets and mysteries that I have to keep all in line, as to what I can and can’t tell you. Let’s just say he’s very savvy. He’s incredibly mysterious.

AX: I’m guessing it was different sorts of research, but what kind of research did you do for your characters?

NIELSEN: Sure. I think I had very little time to research. I literally moved to Budapest [where THE TERROR was filmed] as soon as my last tour ended, and it was a very swift move, but having said that, I have a Master’s in anthropology, and I’ve studied the Inuit culture, my own culture, for a long time, so I was pretty aware of what were the traditions back then, and what they would have. So I’m very aware of what the culture was.

NAGAITIS: In terms of character preparation, it evolved. The filming was on for about seven months, so it evolved and went on, but obviously, I read a lot about basic navigation and things like that that Hickey would have come to learn. But mostly, it was reading a lot of Jean Genet. A lot of Hickey is based on Jean Genet, and I found myself reading Camus and Sartre. I don’t know why I was in that sort of era. I read a lot of Cormac McCarthy – I read certain things that kept me in a place that I needed to be. Jean Genet was a big thing to read, in terms of preparation. I ended up getting a bit obsessed with that, stayed with him for awhile. I read different people later on as well.

AX: How was shooting THE TERROR in Budapest?

NAGAITIS: The weather was kind of perfect the majority of the time – it was very, very cold. We kept our studios very cold, minus ten, to keep us in the mood. They had these enormous studios and all this space and fantastic crews, and it’s a great place to spend that time.

NIELSEN: There’s a lot of ice in there. We had icebergs.

NIELSEN: In the studio. Yeah. Actually, when you’re from the Arctic, it’s not very surprising. Every time you try to film up there [in the Arctic Circle] and it’s actually cold, your cameras don’t work, you can’t shoot because it’s too stormy. The weather is so unpredictable. To me, it makes sense not to shoot in the actual Arctic, because that could take two years [laughs]. 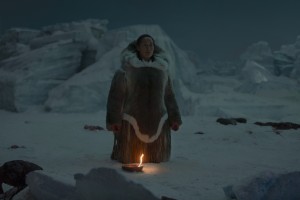 AX: Can you say anything about the creature that is stalking the crew?

NAGAITIS: Well, the beauty of this creature, this whatever it is that is engaging with us, like the audience, we learn about it as it goes on.

NIELSEN: My character knows what it is, but I shouldn’t [disclose it].

NAGAITIS: It’s deadly. But the beauty of the show is that learning curve for everyone on board, and who gathers what, when. That’s very important, and it’s very rewarding.

NIELSEN: And I guess I could say, I don’t know if I’m revealing too much, but we’re trying to stay true to our [Inuit] culture.

AX: Can you say if what it is does exist in real-life Greenland Inuit mythology?

NIELSEN: I don’t know if I can say that.

NAGAITIS: I think it’s best to say that we will learn.

AX: Did either of you read the Dan Simmons novel that THE TERROR is based on?

NIELSEN: I was too [engaged with the script] to read it. Because it’s very similar, but I was sticking to the script, to make sure that I wouldn’t start confusing characters and situations that are different.

AX: What would you guys like people to know about THE TERROR?

NAGAITIS: Above all, it’s based on a real story that is one of the greatest mysteries and attempted feats of survival.

NIELSEN: Yeah. On top of it, the fictional aspect has also tried to be very true to our culture, so that’s also a very awesome mix of reality and fiction and history. It’s a wonderful mix of things that makes for an interesting show.

This interview was conducted during AMC’s portion of the Winter 2018 Television Critics Association (TCA) press tour.