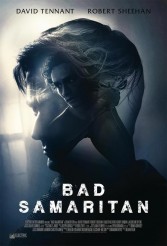 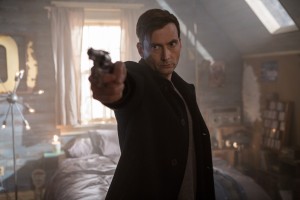 BAD SAMARITAN is written by Brandon Boyce and directed and executive produced by Dean Devlin. Tennant and Boyce both appeared at a press conference with Sheehan and Devlin to discuss the creepy new thriller (watch this space for exclusive interviews with the latter two).

Scottish actor Tennant is beloved worldwide for playing the Tenth Doctor on DOCTOR WHO. Other recent roles have included three seasons as cranky U.K. police detective Alec Hardy and another psychopath, the superpowered Kilgrave, on Marvel’s JESSICA JONES.

As a writer, Boyce adapted Steven King’s novella APT PUPIL for the screen. As an actor, he played Jim Rivaldo in MILK and Dr. Vandenburgh on TEEN WOLF.

Asked why he decided he wanted to play the control freak Cale, Tennant replies, “I love the idea that you imagine I might be in some way tactical, that I was looking for something specific. I just got this script, and I just thought, this is an amazing set-up, and an amazing story, and a bonkers character. So I just jumped at the chance. I wasn’t specifically angling to play a psychotic monster, but there was something rather delicious about exploring those darker corners of the human psyche, of course. I had been reading up on psychopaths in recent history, because I’d played another one for Marvel [in JESSICA JONES], so I dusted them down a little bit, and did a bit more reading around that subject, something Brandon gave me. So there’s lots to read. And then of course you just have to set yourself to [play] this character, and try and find the empathy. Which is hard with a man who has none,” he concludes with a laugh.

Tennant says that, perhaps oddly, he did not find himself depressed or disturbed by playing the darkness within Cale. “No, worryingly not, apparently, anyway,” he says. “I mean, you might have to ask people around me. I felt like I was entirely balanced at all times. Yeah, you do go to that dark place. But then there’s something a wee bit liberating about that. You get to indulge all those things that normally, hopefully, our functioning psychology doesn’t let us go there. So you get to dabble in what it might feel like to have no guilt. For a Scottish Presbyterian whose engine in life is guilt, to get to enjoy just that guilt-free moment – in an entirely safe environment, where nobody’s getting hurt, of course – there’s something kind of giddy about it.” 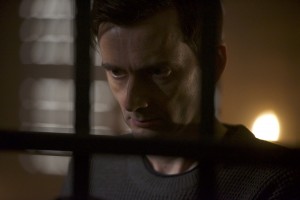 Boyce explains how the plotline of BAD SAMARITAN came together in his mind. “Most of my stories are about jamming two things together, two random ideas that I’ve had, but it certainly started with the idea from the technology perspective of giving your keys to a valet, as you do in Los Angeles maybe a few times a day, and what you’re really handing that person,” says Boyce. “Once the person is in your car, and our GPS has a Home button, or our address on the registration, they get to the house, and there’s an automatic garage door that opens, and now we’re in the garage, and no one ever locks the door [from the garage] to the kitchen, and now they’re in your house. That was the impetus for the whole idea. And then I thought, wouldn’t it be interesting if the house he’s broken into, if that got turned around, and the person who was breaking in had his life completely blown open. What would it take to make that happen, what would it take a very smart psychopath [to go after] somebody I cared about, even though he should probably not be breaking into houses?”

Tennant has his own follow-up query. “Sorry, I realize I’m not meant to be asking the questions, but is there any evidence that that’s ever happened with valets?,” he says. ” Because when I read it, I thought, ‘Of course, of course, this must happen all the time!’”

“It did happen,” Devlin reports. “There was a story that one of my reps sent me shortly after it happened, and I thought, ‘Oh, no, it’s going to be a thing, and it’s going to take all the thunder out from our movie’,” he laughs.

“It might become a thing now, though,” Tennant suggests.

“If I remember right,” Tennant interjects, “you were wearing a DOCTOR WHO shirt, so you weren’t working very hard at it.”

Tennant feigns indignation. “I nearly hung up right there and then.”

There’s a lot of technology in BAD SAMARITAN, most of it masterminded by Cale. However, Boyce reveals, “The technology – the short answer is, I was making s**t up in my head, technology that doesn’t really exist. But I totally believe that this guy would have found a way to make this kind of stuff happen, and I feel like a lot of this stuff now exists, a lot of the stuff that I thought, ‘We’ll never actually get this, with the facility that Cale can use it.’ But we put a lot of faith in locks and passwords and things like that. I’m very interested in that, and have been for a couple of years in my writing. So I’m just kind of picking away at that idea. I start with a question, and maybe I hit an answer for myself by the end of the writing. But I’m interested in picking away at the sense of security that we give ourselves.”

Regarding the interaction between Cale and Sean, Tennant reflects, “I think what’s interesting about those characters as well is that they recognize something in each other. They’re very different – they have a very different way of approaching life in everything that they do, but there’s something that intoxicates them both, there’s something they recognize, almost subconsciously, in each other.”

“Batman and the Joker?” Sheehan proposes.

Why does Tennant think Cale acts as he does? “Well, lack of self-awareness is probably right up there,” he says. “Obviously, there’s a lot of damage in his background. I’m sure a lot of that goes back to his parents and upbringing, because doesn’t it always? And he’s a broken human being who doesn’t realize he is fatally damaged, and he believes he’s the only one who isn’t. So I suppose it’s that, the gap between where he really sits in society and where he believes he sits.”

Boyce says he didn’t feel that BAD SAMARITAN needed to explain Cale’s back story explicitly. “Well, David said it, a psychopath – they think there’s something wrong with everybody else,” explains Boyce. “So they are nomadic by nature, they move around, they don’t have a lot of entanglements, a lot of people in their lives. So in some ways, it’s like a shark – you don’t need to explain why a shark is a shark. So I’m fine throwing the audience in there and saying, they’re going to understand what kind of guy this is. You’re going to see what you’re dealing with, and you’re going to know that that’s the way this guy is going to live his life, going wherever he goes. He’s going to make his life wherever he goes. So I didn’t feel the need to over-explain everything. I felt like the audience will come along.” 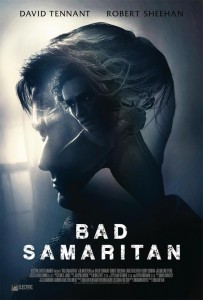 Cale is a scary guy. Have there been any film characters that scared Tennant in his formative years?

While Tennant plays this very scary guy, the actor reveals it’s rare a film has ever truly terrified him.

“The only time I really remember being scared watching a movie as a kid was the Child Catcher in CHITTY CHITTY BANG BANG,” says Tennant. “Robert Helpmann was utterly terrifying in that movie. Even now, I have to look away. How much of that got channeled into Cale, I will let the audience decide, but if it has half the effect on any member of the audience that the Child Catcher has on me, then I will feel like I have done my job well.”

BAD SAMARITAN was shot in and around Portland, Oregon. Although it is relatively rare for snowstorms to occur in the area, the production experienced five during the shoot. “Amazing for the finale of the movie, we got that snowscape that we didn’t have the budget for,” Tennant laughs. “It gives it a fantastic place to end it.”

The snowy wilderness provided Tennant with one of his favorite experiences on the film. “We [Tennant and Sheehan] actually got to do very little acting together,” he adds. “They’re almost two completely different storylines, although they’re interacting all the time, they’re chasing each other. I have very vivid memories of that scene, where you,” he addresses Sheehan, “are all beaten up, sitting on the porch, and I’m haranguing you, and we got into an actual meaty scene together.”

Boyce says his favorite BAD SAMARITAN memory was the production itself. “For me, it was two months of shooting, which as a writer is not something you normally would be, or oftentimes a part of, not that it should be that way, but it often is,” he adds. “And for me, it was the experience of being part of this, and Dean and I [collaborating]. I was there the entire time. So it was seeing things working, it was solving problems along the way, helping to see what worked and what didn’t work, and trying to figure out a way to make it happen. Oftentimes, when the writer is there on set, if the writer is there for any amount of time, it’s writing what they’re going to be shooting, locked in the trailer, writing what’s going to be shot after lunch or what they’re going to shoot the next day. I didn’t even bring my computer to set. That [speaks to] how prepared everybody was. A lot of that is a testament to Dean having done his homework about the locations and where they were going to shoot it. So I was there – it really freed me up to be useful in other areas. So I’m grateful for that, and that was fantastic.”