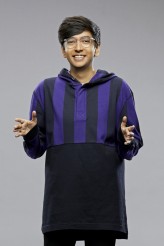 The actor talks about bringing back a classic 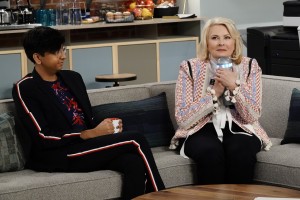 The half-hour comedy MURPHY BROWN, about an opinionated TV journalist played by Candice Bergen, ran on CBS for ten seasons, 1988-1998. Over those years, MURPHY BROWN racked up multiple Emmy and Golden Globes wins for Outstanding Comedy and for Bergen, as well as other awards.

Now Bergen and series creator Diane English are back with CBS’s series revival of MURPHY BROWN on Thursday nights, with a Thanksgiving episode airing on November 22. There are lots of familiar faces as many of the original cast have returned, including Faith Ford, Joe Regalbuto, Grant Shaud, and Charles Kimbrough.

Something new to MURPHY BROWN the series and Murphy Brown the character is the advent of social media. Enter youthful tech specialist Pat Patel, played by Nik Dodani. As well as being an actor (known for ALEX STRANGELOVE and THE GOOD NEIGHBOR), Dodani is also a stand-up comedian, a writer, and a political activist who works with Move On.

ASSIGNMENT X: Were you familiar with MURPHY BROWN before you got involved in the show?

NIK DODANI: Yes. My mom is a huge fan. I used to watch reruns with her when I was a kid, and so I was obviously familiar. Still, I was a child when it was on the air, and right now, I’m working my way through the original, bingeing it, and so it’s really fun.

AX: Do you have any thoughts about doing something like MURPHY BROWN, that’s a revival of a successful series, as opposed to something brand-new?

DODANI: Well, reboots and revivals are always tricky, because it’s tough to bring something back and make it as good as it was the first time around, but once I read the script, I was sold. And these characters – Murphy is an icon. It was something I couldn’t pass up.

AX: How do you enjoy working with Candice Bergen?

DODANI: She is incredible. I don’t know how she does it. I get tired after two scenes, and she is in every single scene, doing every single thing. She’s there the longest, and always on point, her timing is incredible, she never complains, and it really sets the tone for the show. It’s fun, and it’s exciting, and for me, I always want to impress, so it keeps me on my toes.

AX: Is this multi-cam or single-cam?

AX: How are you enjoying the multi-cam format?

DODANI: I’ve done theatre, I do stand-up, so being in front of a crowd is something that I love. When we had our first taping. I was so nervous, but it went so well. Working with these guys is incredible. They’re pros, and they’re so good at what they do. Like I said, I’ve learned so much from them, and they’ve given me so many pointers and insights and tips.

AX: Did you have to learn anything to play your tech specialist character?

DODANI: You know, it’s funny, because I personally am not a huge fan of social media. I deleted my Twitter earlier this year on the advice of my therapist, and it was the best decision that I’ve ever made. And so I tell everybody, “Delete your Twitter, get off Facebook, don’t post on Instagram while drunk. Keep it out of your life.” Which is interesting. It’s fun to play the exact opposite. It’s making me think about the issue, and the role that social media plays in the world in a different way.

AX: Are they working any of your real-life political activism into your character?

DODANI: Yeah. Diane is such a collaborative writer and creator, and she’s really talking with all of us about our experiences, and our perspectives, and incorporating that into the show, which is really exciting.

AX: Can you talk about why you’re involved with political activism?

DODANI: For me, it was personal. I’m an Indian guy from Arizona, who is gay, working-class family, blah, blah, blah, son of immigrants. It was all very personal for me, and it was hard not to get involved and it’s really special to be a part of a project like this.

AX: Can you say if your character’s political views align with yours, or if you’re playing somebody who’s more apolitical than you really are?

DODANI: I would actually say I’m more apolitical than the character is. “Apolitical” is the wrong word. How do a phrase this? I think I’m a little more problematic than my character is, and more complicated. I think the character represents the Woke young generation that I don’t necessarily fit into myself all the time. And so the character and I are fairly different.

DODANI: Yeah, I’m on a Netflix show called ATYPICAL. It’s about a kid on the autism spectrum who’s trying to figure stuff out.

AX: And what would you most like people to know about MURPHY BROWN?

DODANI: A lot of folks my age don’t know who Murphy Brown is, and I think they need to fix that.

This interview was conducted during CBS’s portion of the summer 2018 Television Critics Association (TCA) press tour.