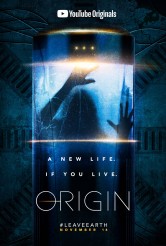 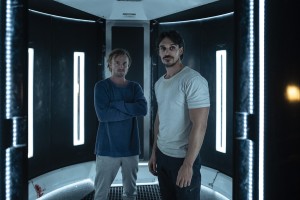 In ORIGIN, the new series now streaming on YouTube Premium (the first episode can be seen for free on regular YouTube), a group of strangers have set out with the hopes of beginning new lives on a distant planet. However, they are awakened mid-journey when something goes wrong with the ship. Now each one must confront his or her past in order to deal with a dangerous present.

Mika Watkins created ORIGIN, and is an executive producer on it with Rob Bullock and Suzanne Mackie, both of Left Bank Pictures.

ASSIGNMENT X: Was the idea of ORIGIN always to show people’s origins, or was that partly so that you could open it up to scenes on Earth so it wouldn’t get too claustrophobic when you were on the spaceship?

MIKA WATKINS: No, that was always the point. I mean, it’s called ORIGIN, so it was meant to be about where people come from and what makes them who they are, so I think that was always there from the beginning. I wouldn’t write a show that was just purely on a spaceship for ten hours, because I want to do the character drama, and I think the juxtaposition of who they used to be and who they’re trying to be is what makes the show unique.

AX: Was that an aspect that drew you to the project as producers?

ROB BULLOCK: I remember sitting down with Mika for the first time, and asking her what was most important to her about the project, and if I remember rightly, one of the things she said was, it was this notion of tabula rasa, this idea of people trying to escape their pasts, and how actually their pasts always come with them, and I thought that was a very interesting idea, a very interesting theme. So yeah. And also the fact that she’s just a great writer, she writes fantastic scripts.

AX: Did you at Left Bank develop the script? That is, were you involved while you were writing the script, or did you come in once there was a script?

WATKINS: No. Left Bank Pictures came in when I had just written a pitch document that they bought, so they commissioned the script.

SUZANNE MACKIE: On the basis that it sounded just completely exciting and brilliant, and we got to know Mika over a couple of years, we thought she was an exceptional talent, and we just wanted to get behind her, and that’s all we did.

AX: The characters and much of your cast come from all over the world. Was the internationalism of it all always part of ORIGIN, or did that come in once you started casting?

MACKIE: It was in the DNA of the show.

AX: Was it easier to write who they were on the ship, and then go backwards out of that, and say, “Well, who would they be to become this?” or did you start with all the different origin stories and say, “Who do they want to be?”

WATKINS: No, I think because I knew their origin stories first, both were already built, so I think it was just a case of making sure that their voices felt unified, but also distinct in terms of what you’ve been through already when you’re in the present, and how were you different before?

AX: There’s also a creature on board the ship. Does the series title also refer to the creature?

WATKINS: No, the ship itself is called The Origin. 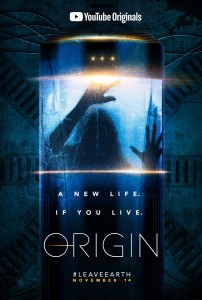 AX: To ask a tweaky casting question, you have Tom Felton, who is British, and known to most people for portraying Draco Malfoy in the HARRY POTTER films, playing Logan, who is American. Since you were casting from all over, why did you cast an Englishman as an American?

BULLOCK: Because he was just so perfect for the role.

MACKIE: Yeah, that’s right. And I think he was always American, wasn’t he?

BULLOCK: Yeah. The character is American. [Felton] has got an amazing American accent.

MACKIE: He lives here [in Los Angeles]. I think actors are great at being able to inhabit. I don’t think that [nationality] should ever be a reason not to cast someone. He just felt so right for the part, we love him and his energy, and he lives here. It just felt right.

AX: You also have Natalia Tena, who was Osha in GAME OF THRONES, as Lana Pierce. Were you looking for actors with genre cred, or is that just a coincidence?

MACKIE: It’s a coincidence. Well, we just wanted the best people for the characters, and they both came up and it was a very happy coincidence. YouTube are like, “Things that have cachet here are GAME OF THRONES and HARRY POTTER,” and we were like, “We’ve got them both.”

AX: Do any of the other actors have followings in other countries?

MACKIE: I think Philipp Christopher [who plays Baum Arndt] has a really big following in Germany. He’s a very successful German actor. And then Adelayo Adedayo [who plays Lee] is a rising star in the U.K. Everyone, really.

BULLOCK: Yeah. Sen Mitsuji [who plays Shun Kenzaki] has got a big following in Japan, he’s well-known. Everybody brought their tribe.

AX: You’ve said the origin stories take place all over the world. You actually shot in South Africa for everything, right?

BULLOCK: Yeah. We go to seven different countries [in the story].

AX: Are any of you from South Africa originally?

WATKINS: No, [Bullock and Mackie are British and] I’m from Wales [laughs].

AX: How did production for ORIGIN wind up in South Africa, then?

BULLOCK: Well, we needed to build a huge set. I had previously done a project in South Africa, where I’d had a very positive experience. We looked at several different countries, but South Africa was the best combination of giving us somewhere to build a great set, but also, it has a variety of landscapes around Cape Town that allows us to recreate France, Germany, Japan. It made sense story-wise.

AX: Were there any things you had to modify in order to suit the production practicalities?

BULLOCK: No, I don’t think so. Mika has these huge, brilliant dreams, and I think we managed pretty much to bring them to the screen. South Africa gave us huge scope.

AX: Did you find designers in South Africa who made you happy, or did you bring in people?

BULLOCK: We actually worked with a lot of local crew. Our designer was Ed Thomas, and he was someone who Paul W.S. Anderson, who directed the first two episodes, was very keen for us to meet, because he’d worked with him on the last RESIDENT EVIL film, and he’d just finished a project in South Africa. So it was just fate. It worked very well. We met Ed, he was brilliant, and he was a huge element in the success of the show. And Paul set up the show. His movies have grossed billions worldwide. He’s a huge directing talent, and he chose our show to be the one that was his journey into TV.

MACKIE: And he’s an executive producer as well, so his presence has been very felt across the whole season.

AX: In terms of producing, had you guys previously done anything either set in space, or that had a creature, or those aspects of production, or worked in South Africa?

BULLOCK: Yeah. I’ve done shows set in space filmed in South Africa, but this is the first time we’ve actually filmed Cape Town for Cape Town, which was great for Fraser James’s [who plays Henri] story. We all wanted to tell one story where we could show the country we were filming in for what it was. But I’ve also done international shows where we’ve gone round the world, so it was a pleasing combination of a lot of things that interest me, this show.

AX: How do you guys divide up your work as producers at Left Bank, or do you have very different responsibilities?

BULLOCK: We sort of tag team quite a lot, because we always wanted to make sure that there was always somebody available to the show. I think I probably spent more time in South Africa, but I think Suzanne was there with Mika right from the very start, so between us, we followed it all the way through.

MACKIE: I’m one of those irritating executive producers who just fly in and out, so I get parachuted in and parachuted out. But I worked with Mika very closely right from the beginning. But Rob’s been really producing it. I’m just the exec producer.

AX: And what would both of you most like people to know about ORIGIN?

BULLOCK: That it is utterly unique, it’s a chance to see one of the most exciting new writing talents, it encompasses sci-fi, horror and thrills for that audience, but also personally, I know my wife, who’s not a big sci-fi fan, she’s going to love the show because of all the character-driven stories that we do. Every episode takes us into somebody’s life, the reasons why they got on that ship. So it is a fantastic combination of these disparate elements.

MACKIE: Yeah. And how exciting to have an episode of a brand-new big series, a large percentage of which is in Japanese. I think that’s thrilling. I think that speaks of an ambition in television that I don’t think we’ve seen until recently, and I think it’s really important to say that its internationalism is very organic to the story, and so for us Brits to tell a story on this sort of platform is really exciting.