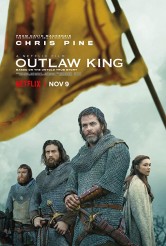 Those who know anything about Scottish history – or in fact have any memory of BRAVEHEART, especially its postscript about what happened a few years after William Wallace’s death – will be familiar with Robert the Bruce. OUTLAW KING tells of how that historical personage wrested Scotland from England. We can tell they’re fudging a few facts, as well as condensing the timeline, but OUTLAW KING is meant as entertainment, not as education. As such, it does a pretty good job.

In early 14th-century Britain, the Scots are at the end of an unsuccessful rebellion. The two families with claims to the Scottish crown, the Bruces and the Comyns, both reluctantly but formally cede power to the English King Edward I (Stephen Dillane). However, Scottish rebel William Wallace (not seen, but often discussed here) refuses to surrender. The senior Robert the Bruce (James Cosmo) makes his namesake (Chris Pine) his heir. When the younger Robert the Bruce sees how angrily the Scottish commoners react to Wallace’s capture and execution, he decides an independent Scotland is what’s needed after all. When John Comyn (Callan Mulvey) disagrees, a lot of events get set in motion. Chief among these are Robert the Bruce’s coronation and his decision to wage guerilla war against the English.

OUTLAW KING was shot in Scotland, and director David Mackenzie, a Scot himself, has a wonderful feel for the landscape. He also knows how to make battles look impressively brutal and painful and messy and fearsome. (The end title assuring the audience that no animals were harmed during the making of the film is a relief, as some of those horse falls are alarming.)

Mackenzie and his fellow screenwriters Bash Doran and James MacInnes, with “additional writing” credited to David Harrower and Mark Bomback, also manage the tricky feat of getting us more or less on Robert’s side, even though he and his compatriots aren’t entirely sympathetic, and there is some feeling for the pressures on Edward I and his beleaguered son Edward II (Billy Howle).

The movie makes the case that Robert is truly responding to the will of the people, although there’s certainly an opening for a more cynical reading of his motives. Still, the story of an outnumbered band fighting overwhelming odds is almost genetically compelling. We also get to see (instead of just hear about) exactly how the home turf helps the Scots, and we have some notion of the potlical complexities of the day. Where the filmmakers get tangled up is with the supporting characters. There are masses of them, and most of them don’t get enough screen time to make an impression. Therefore, when they die, our reaction tends to be, “Who was that, and why does it matter?”

Pine does a serviceable Scots accent and rises to the seriousness of the occasion, while still suggesting Robert the Bruce has a sense of humor. Dillane is regal and wry as Edward I and Howle has a kind of desperate hope that somewhat humanizes Edward II. Florence Pugh is excellent as Robert’s queen Elizabeth, Tony Curran is convincing as Robert’s right hand, and Aaron Taylor-Johnson, unrecognizable from other work, is entirely committed as fanatical Bruce supporter James Douglas.

OUTLAW KING has extraordinary locations and strong production values. However, there’s a costuming choice that has Pine’s king in a doubtless period-correct but unfortunately contemporary-looking long white sweater for much of the film.

There are movies that completely draw you into their world. OUTLAW KING isn’t one of these, but it holds our attention and gives us a reasonable sense of what it’s like to be fighting in a muddy ditch against an enemy no more than a blade’s length away. For some, that’s reason enough to watch.