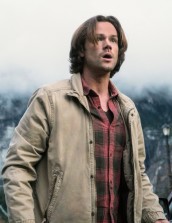 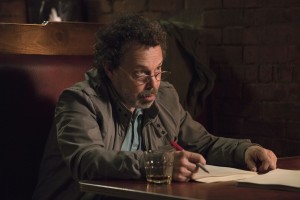 The SUPERNATURAL Season 11 episode “Don’t Call Me Shurley” brings back the elusive Prophet of the Lord Chuck Shurley (Rob Benedict). Except – confirming what has been suspected by viewers if not other characters for a good while now – turns out Chuck is really God.

Say what, now? Chuck, who used the pen name of Carver Edlund, has become more and more meta since he was introduced way back in SUPERNATURAL’s fourth season in the episode “The Monster at the End of This Book.” Sam (Jared Padalecki) and Dean Winchester (Jensen Ackles) were astonished to find that a series of books had been written chronicling their adventures. Chuck was a Prophet of the Lord, which is how he knew so much about the guys.

Chuck’s pen name is derived from former SUPERNATURAL show runner Jeremy Carver and writer/producer Ben Edlund. He had become more and more like series creator Eric Kripke, even disappearing at his typewriter at the end of Season 5, which is when Kripke left the show.

Metatron (Curtis Armstrong), the one-time Scribe of God, now reduced to being human after his attempt to become God himself, is rummaging around in a garbage can. He redeems himself a little bit by giving pastrami he wanted for himself to a starving dog. Then Metatron and the dog are both suddenly transported to a nice little dive bar, empty except for Chuck.

Metatron first recognizes Chuck as the hack writer of the books about the Winchesters. Then Chuck gives Metatron a pair of glasses and reveals His true divine nature. Metatron immediately reverses direction and praises God, who asks to be called Chuck.

Has Chuck brought Metatron here to put the world in order? No, he wants Metatron to edit his autobiography. At first, Metatron sucks up. Chuck, being all-wise (though insecure), sees through this. So Metatron tries to read the book. He’s not crazy about Chuck’s adventures as a human. Finally, he challenges Chuck: does Chuck want his memoirs to be like the autobiography of Keith Richards, or like that of Brian Wilson? Chuck chooses Keith Richards – the unvarnished truth. Chuck then writes illuminating chapters like, “Why I Never Answer Prayers – and You Should Be Glad I Don’t.”

But when Chuck says he’ll stand back and let his sister Amara, aka the Darkness, destroy the world, Metatron challenges that, too. He accuses Chuck of being a coward. Chuck divinely flings Metatron across the room, insisting he’s not a coward, he’s just done. Metatron is angry. He says his own turn towards evil, and trying to usurp God’s place, was a cry for attention. He also makes a case for humanity. Unlike Chuck, they never give up.

Meanwhile, Sam and Dean are in a small town beset by Amara’s killer fog. It’s making the residents attack each other. Dean is immune, but Sam isn’t. Just as it looks like Sam is dying, a brick is thrown through the window of the police station where they (and other citizens) are taking cover. The brick has Sam’s long-lost amulet tied around it. The amulet glows, healing Sam, dispelling the fog – and even resurrecting those killed in the havoc surrounding it.

When Sam and Dean go out to the street, Chuck walks up to meet them, smiles, and says, “We should talk.”

“Subversive” seems way too small a word to describe “Don’t Call Me Shurley.” Even though there are a number of shows that traffic in the divine and the demonic (see LUCIFER, THE STRAIN, THE GOOD PLACE, et al), there aren’t too many that bring God onstage, front and center, making declarations and generally getting into it with the other characters. Never let it be said that SUPERNATURAL won’t boldly go where other shows don’t dare to tread.

And the episode is very self-referential, up to the point of giving Chuck another series of books besides the Winchester Gospels – he’s also written something called REVOLUTION, which he admits didn’t get quite the same following. (For those not tracking, REVOLUTION was another Kripke creation, which ran on NBC for two seasons.)

Having Metatron go from someone we hate to someone we like again in one episode is quite a feat, but we have to give him points for feeding the dog, and of course for apologizing and championing human beings, not to mention getting Chuck back to Earth, literally and figuratively.

The Sam and Dean part of the episode is a little rushed – basically, they just need to be painted into a corner that requires Chuck’s intervention – but it works well enough. Sometimes SUPERNATURAL is run of the mill, and sometimes it repeats itself. Sometimes it does something that no other series does, and “Don’t Call Me Shurley” is an episode that displays SUPERNATURAL’s nerve, proudly showing off its uniqueness and insanity.