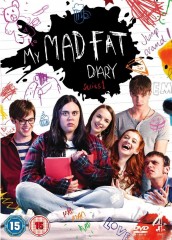 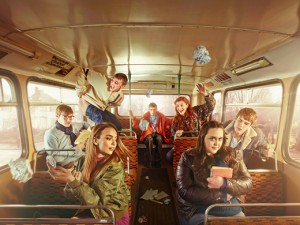 MY MAD FAT DIARY is a coming of age dramedy that ran for three seasons on E4 in the U.K. It is now available in its entirety on the Hulu streaming service. The show is based on two books by Rae Earl about her adolescence. In the series, Sharon Rooney plays young Rachel “Rae” Earl, who is trying to get her life back together after a suicide attempt, followed by four months in a mental hospital in Lincolnshire, England.

The real Earl wrote for the MY MAD FAT DIARY TV series, and is very much enjoying her visit to Beverly Hills, California, where she speaks on a panel about Hulu’s international offerings for the Television Critics Association press tour.

It took a little while, Earl notes, for MY MAD FAT DIARY to find a home in the U.S. She thinks the universal topics helped. “I’m very lucky in the subject matter, because adolescence is usually horrible for everyone globally, unless you are incredibly lucky, and I wasn’t. I would say that I think the subject matter is quite challenging still. It shouldn’t be, but it is. It features an unconventional protagonist, perhaps less so as time goes on, but it does. She’s not a Size Zero. It’s very weird talking about yourself like she’s a character, but I’ve got to for the purposes of this. She’s a pain in the bum, and she’s a challenging person on the screen. I’m not just saying this – I think it took somebody quite brave to take her on. I think you’ve got to remember this is a show where people take drugs, people swear a lot, I’ve got mental health problems, I masturbate thinking about centurions. That’s fairly challenging, and we were waiting for the right distributor.”

The TV version of MY MAD FAT DIARY was moved slightly later than the books, Earl explains, but not up to the present. “The original [books] DIARIES were late ‘80s, early ‘90s. We moved it to ’96, mid-‘90s, a cool period in Britain’s history, before Brexit suicide. But the interesting thing, had we made it contemporary and set it now, social media would have absolutely changed the shape of that drama completely. If you are doing something about a teenager now, it’s going to pivot. So I think there would be a real challenge there in moving a story like that to a setting now.”

When the panel ends, Earl relaxes on a balcony at the Beverly Hilton Hotel and engages in some follow-up conversation.

ASSIGNMENT X: Were you interested in writing television for young adults before this, or did you just suddenly have an epiphany and think, “This version of my life would be interesting”?

RAE EARL: The book was out first, and the book got bought by a production company, and that’s how it happened.  The book was my book. There are two books based on my life as a teenager.

AX: Are you glad now that you went through those experiences because you were able to write about them and you now have the show, or do you think, “The show is a consolation prize”?

EARL: [laughs] I think the show is a consolation prize. I think it’s very much the beautiful icing on a rather unfortunate cake. But you know what? It’s a great thing to share. Because I think a lot of people have been through it, so it’s great.

EARL: I left it pretty much carte blanche [to the producers], and who they got was absolutely superb. She’s called Sharon Rooney. She’s a revelation. She’s now been on Broadway, she’s in a huge series back home called BRIEF ENCOUNTERS, she is fantastic, a fantastic actress.

AX: You mentioned the Brexit. Is that worrying you, is that giving you creative fuel?

EARL: I live in Australia, so I feel a bit weird saying about this, but I think the Brexit is a dreadful burp of some misguided opinion that Britain was somehow this great, golden nation, and it’s nonsense.

AX: And is there anything else you’d like to say about MY MAD FAT DIARY?