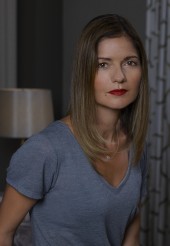 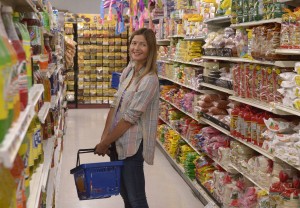 In Fox Network’s Wednesday-night limited series SHOTS FIRED, created by Gina Prince-Bythewood and Reggie Bythewood, a special prosecutor (Stephan James) and his top investigator (Sanaa Lathan) are called in to handle a case in a small North Carolina town. The only black law enforcement officer on the local force has shot and killed a white teenager, Jesse Carr. This incident turns to be tied into the uninvestigated killing of a black teenager weeks earlier.

ASSIGNMENT X: Is Alicia simply upset about Jesse’s death, or does she have deeper secrets?

JILL HENNESSY: Well, there are a couple of other issues that do come up. She’s a single mom, raising her son, Jesse. He was eighteen when he was killed. But she divorced when Jesse was four, because her husband had a serious drinking problem he was unwilling to deal with. And that comes back up. There’s a funeral, and the father comes back. So it’s a whole myriad of issues that are applied and layered with every episode, for every character. But for my character, we see the dissolution of their marriage, but then we also discover something about the relationship between Jesse and his father, unbeknownst to Alicia, that throws her for a loop, somebody who’s desperately tried to raise her son as best she can and held on a little too tight for fear of him getting hurt, seeing what happened to her husband, how he lost himself to alcohol and being so afraid her son would do that, too.

And then there’s another political issue, where a politician wants to use Alicia for his own political agenda. There are so many brilliant aspects and issues of this that Gina and Reggie deal with so brilliantly, and from so many different sides, and through so many different lenses. So there are no stereotypes, there’s nothing that’s too simple or patronizing. It is so real and hard-hitting, and they take absolutely no shortcuts in the writing.

AX: You’re very often cast as someone who is very highly educated, lawyers and doctors. Was Alicia kind of a refreshing change for you?

HENNESSY: Yes. It was cool, and especially since I’m not that educated [laughs], between you and me. It was actually really refreshing to play somebody who is so immersed in her pain, and so bombarded with everything that’s happening. Not only does she lose her son, but then she’s surrounded by people who at first might seem generous, and then might possibly be using her for their own agendas. Politicians, local leaders, community leaders, a governor. We don’t know. I mean, as the actor, we’re never sure what all these agendas are.

AX: And then Alicia intersects with Shameeka, played by DeWanda Wise, who is the mother of the black teen who was murdered …

HENNESSY: Alicia has her own experience with pain. But then she sees within the context of what Shameeka is going through, being a woman of color, and witnessing first-hand how the press is dealing with the death of her son and the discrepancies, and how Shameeka is being used by various people surrounding her for their agendas. So it’s an awakening for actually every character in this, but for my character, definitely. The way Reggie and Gina did it, it shows the dichotomy [between how cases involving different ethnicities are treated], you see the discrepancy, and it’s important to see that, too.

AX: Was Jesse Alicia’s only child?

HENNESSY: Yes. It’s tremendous. There is nothing worse. But Shameeka’s character has another son, a younger son. But Alicia takes her grief and her mourning in a different direction than Shameeka does, which I also love to see. And in a way, when Gina and Reggie first brought the character to me, and the character back story – by the way, I got more source material from these people than I’ve ever received from any project I’ve ever worked on. These people love these characters so much, and it was such a gift as an actor to get those kinds of back stories and images. They sent me photos. But they also wanted my character to explore the anger of mourning. And it’s tough for people to see somebody who’s in pain being angry, and yet, if you don’t have a right to be angry after your child has been killed, I don’t know when you do have a right, if you’re not angry then. So my character is left with nothing.

AX: Were you drawn primarily to playing this different kind of a character for you, or to the SHOTS FIRED project overall?

HENNESSY: To both. When my agent sent me the script, I think he purposely didn’t tell me what the subject matter was. He basically said, “Look, this is one of the best scripts I’ve read. I will tell you that. I will also tell you it’s about subject matter very close to your heart. I’ll leave it at that. You read it, you tell me.” It was so earth-shattering and refreshing and heartening to see this subject matter dealt with in the way they did it, because I really felt they dealt with such an imperative issue and a horrific issue by allowing the audience to see this through so many lenses. But also, the other ramifications, the whole context of the situation, be it in our police precincts, in our justice system, in our political system, our prison systems, in our social circles, being female, being male. Whatever community you belong to, they created real characters that live in all of these areas, and yet they never stereotype them. They never gave one person a certain ideology based on whatever community they were coming from. And it’s so rare to see writing like that. And I’ve never seen this issue dealt with in this way with any TV show, nor in any film.

AX: And is there any difference between dealing with exec producers/creators/show runners who are in a marital partnership, as Gina Prince-Bythewood and Reggie Bythewood are, versus simply a writing partnership?

HENNESSY: I do have to say, number one, it was one of the best working environments I’ve ever been in, bar none. Reggie and Gina work beautifully together. They’re very soft-spoken, they share that,  and that’s always beautiful to work with. But they also assembled a crew and a production staff and a cast that were very like-minded. Everybody came to that set because their heart was in it. You’d be watching the news one night, and in the morning, then going to work, and DeWanda and I would realize, “Oh, my God, we’re saying the same dialogue that that mother just said in that news briefing, or that father just said.” So you’re sort of coming to the table with a lot of responsibility. You want to do some honor to these people, you want to respect their circumstances. So it was an intense project. It was cathartic.

AX: SHOTS FIRED episodes were directed by a lot of people who were primarily known for making feature films. How was working with all of them?

HENNESSY: It was a gift every time. You would get another script, and they’d tell you who was directing. And then to get to know these directors – Kasi Lemmons, people you’ve admired – and then to hang out on set with them, and cry with them, and laugh with them, and express our frustrations, our anger, our joy. It was a gift. I’m honestly so grateful that Gina even looked at my audition tape and said, “Yeah, let’s choose Jill.”

AX: Given the build-up in the world in the last few years, were you particularly looking to do something topical at this time?

HENNESSY: I’m always desperate to do something that is topical, to be honest.  It’s so much more fulfilling and easy, as an actor, to be honest. Because you’re going to work, and you’re not acting. The line between fiction and nonfiction really was kind of blurred on this, I’ll say that. And I was closer to these actors and production staff and crew members than I think I’ve been on any set I’ve ever been on.

HENNESSY: I’m actually in an episode of THE BLACKLIST [which originally ran in January], which was just kind of a wild, crazy character which you rarely if ever see women play, literally, a very disturbing, maniacal sociopath. “Okay, that’s an interesting character, let me give that a whirl.” And there was the possibility of maybe kissing Megan Boone [who plays Liz Keene] in the episode. So I went, “You know what? Let’s jump in.”

AX: What would you most like people to know about SHOTS FIRED?

HENNESSY: It’s some of the work I feel like I’m most proud of that I’ve ever done. I can honestly say that for myself. About SHOTS FIRED, I pray people come to this show with an open heart. I’d like to think that it will bring about healing and empathy.