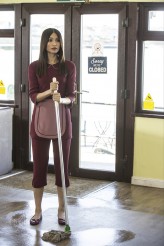 HUMANS: Show creators give the scoop on Season 2 – exclusive interview 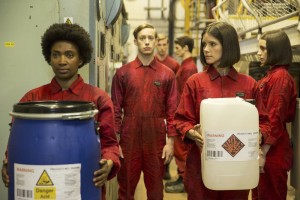 HUMANS presents us with a near-future where artificial intelligence has resulted in “synths” that are physically identical to humans. Most synths are used as servants, but some have secretly been programmed with human consciousness that causes human emotions. Set in England, HUMANS begins its second season on AMC Monday, February 13.

Executive producers Jonathan Brackley and Sam Vincent adapted HUMANS from Lars Lundstrom’s Swedish series REAL HUMANS. The duo previously worked together on MI-5. Together at a restaurant in Pasadena’s Langham Huntington Hotel, Brackley and Vincent talk about what’s next for the synths and their friends.

ASSIGNMENT X: How did you become involved in HUMANS?

JONATHAN BRACKLEY: REAL HUMANS was on TV in Sweden about, oh, it must be getting on about five years ago. So we were approached by a production company that had gotten the rights to remake it, and they asked us if we were interested in remaking a show about robots, and we said, “Hell, yeah, it sounds amazing.” So we watched the original – it’s a great show, so many fascinating ideas – but we thought we could bring our own take to it.

AX: What are the differences between your version and the original?

SAM VINCENT: The differences are, back in Season 1, we decided to stick quite closely to their original Episode One. So if you watch the Swedish one side by side, you’d see all the corresponding characters. But then as it went on, it just organically, naturally departs from that story. As we put more and more of our own ideas in, it becomes more of its own thing. So by the end of Season 1, it’s in a very different place from the Swedish show, and Season 2 doesn’t really bear any relation to the Swedish show. It’s now entirely our own story.

AX: Were you writing partners together on MI-5?

BRACKLEY: That’s right. We’ve been writing together for the best part of ten years, so we joined MI-5 for the ninth season, and then we ended up being the head writers on the tenth and final season.

AX: Was working on MI-5, which was about a spy agency, with a lot about secrets and people sometimes pretending to be people they aren’t, good preparation for doing HUMANS?

AX: Can you tease where Season 2 of HUMANS is going?

VINCENT: With Season 2, the story really expands. It becomes a lot more global, it becomes bigger, the stakes increase. But we’re still trying to keep that balance of the domestic and heartfelt stories with the bigger, more science-fiction element, which we think is key to the show. It goes to some darker places, but there are also some really funny moments as well. So really, it’s just bigger, in every sense.

AX: At the end of Season 1, the synth Niska, played by Emily Berrington, absconds with the code that allows synths to achieve full consciousness. Can we assume that Niska makes some mischief with that code she’s stolen?

BRACKLEY: That’s a reasonable assumption. She’s out there with the code, and she’s got a big decision to make. 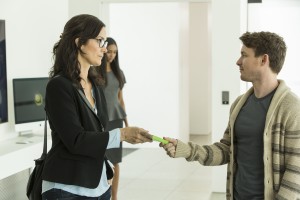 AX: Did you go into HUMANS knowing you were getting a Season 2, or did you start planning Season 2 once you got picked up, or was it somewhere in the middle?

BRACKLEY: We didn’t know that we were going to get a Season 2 at the beginning. But as we were writing the first season, we started to think about where it could go in a potential second season. We had a lot of ideas. So fortunately, we were picked up and we were ready and raring to get going to realize those ideas.

AX: In Season 1, the conscious synths are eventually befriended by the Hawkins family. Did you have a hard time figuring out how to work the family back into Season 2, since the synths had all scattered?

VINCENT: It’s funny, everybody asks us that. It did seem to be sort of a natural split between the synths and the family at the end of Season 1, and it could quite easily have become a show just about the synths, but in our minds, that would be a much more conventional show, just a kind of science-fiction thriller following them. And the family is so important to ground the world, to make it an accessible show, and not just a kind of pure genre piece. That’s what makes it unique. So we were determined to find a way to bring those two families, the synth family and the human family, back together. And that was our first priority, to figure out a natural story way to do that. But they’re so emotionally entwined that as soon as you get them back together, the stories entangle themselves really satisfactorily.

BRACKLEY: Yeah, we thought that the family would miss the synths, they were really, really important to each other, and the synths would feel the same way about the family. But also, the synths know that that human family are the only people that can help them, the only people that know what they really are, the only humans they can possibly trust. So who else are they going to turn to in a moment of crisis? And the human family, particularly the kids in the family, they are pining for the synths, really, because they had profound connections to them. So it’s all really there – the desire to get back together is there, we just needed to find a piece of story to do that.

AX: And do we see any more of the self-hating synth Beatrice and her partner?

BRACKLEY: Yes, we do.

AX: One of the major storylines in Season 1 concerned Dr. George Millican, played by William Hurt, who was one of the scientists involved in creating the synths. George was very devoted to his malfunctioning synth Odi, played by Will Tudor. We’ve lost George, but will we see any more of Odi?

VINCENT: I think we can probably say that you will see Odi again, yes.

AX: Was that relationship between Odi and George in the original, or was that something that you came up with for your version?

VINCENT: The relationship between Odi and George was in the original. We sort of took it to a slightly different place, but yeah, that was there.

AX: In Season 1, Joe Hawkins, played by Tom Goodman-Hill, programs the synth Mia, played by Gemma Chan, to have sex with him. He didn’t know at the time that the synths were fully conscious, but he did seem to think of her as something other than a machine at the time. So does Joe on some level feel adulterous guilt, no matter what he’s saying about it to his wife Laura, played by Katherine Parkinson?

BRACKLEY: I think he does. We didn’t want to kind of just pull the rug over that story and sort of reset it, because that’s not how relationships work, and certainly not how marriages work. So when we meet them [in Season 2], we see that they’re still trying to work through that, and Joe really is still not being entirely clear and honest with himself or her. Although he really wants the relationship to work, he’s really not faced up to what he did. But we see him have a little breakthrough in that. And he’s helped get to that breakthrough by a very unexpected source, as you’ll see in Episode One.

BRACKLEY: I think of course it had a big political resonance from the start. The really nice thing about it was the parallels are so clear that we realized we could leave them in the subtext and let the audience do the work. We never had to hit anything too hard. It all just sat there nicely and the audience responded to it. I think that you could absolutely say that any story which features an oppressed group of intelligent beings, arguably humans, who are not afforded the same rights and status as most of us – yes, you can absolutely say that these stories are more pressingly relevant now than ever before.

There are two stories and two characters who take care of both sides of that question. There is one synth who goes down a rather different path to most of our synths, and the things that this synth does potentially mean that this particular synth should not be afforded full human rights, and on the other hand, we have a story that very explicitly deals with, in a legal setting, how can we ascertain what rights we grant one of these machines if it appears to be conscious. So absolutely, that is at the heart of what Season 2 is about. They all look human, just as all the synths did in Season 1, because that’s what synths are. It’s more about what’s inside and the choices they make, and how they behave.

VINCENT: The more human they look, the more interesting the issues are.

AX: Did you do any research into the state of real-world artificial intelligence, A.I.?

VINCENT: We did. We were fortunate enough to meet with several people – one of the leading experts on consciousness, one of the leading experts on artificial intelligence – and it was fascinating meeting both those people, especially the A.I. expert, who in particular was very keen to stress the potential benefits of A.I. in the future, because I think naturally stories like this might lean towards a sort of dystopian view. But this particular expert we spoke to, he thinks that artificial intelligence is going to be a tool in the future. We’re going to be able to use it to fix things like the economy, like health care, like education. So it was fascinating.

AX: How plausible did he rate the A.I. in HUMANS?

VINCENT: [laughs] Well, I think obviously we take a lot of artistic license. The key thing is, nobody really knows when or how we’ll get to a true advanced sort of artificial intelligence, so that’s up in the air. Some people say it could be five years’ time; some people say no, it’s going to be seventy-five years’ time. So nobody really knows. But the people we spoke to, they were very complimentary about the show, and I think our artificial intelligence, the issues that we deal with, are plausible instances of what could happen.

AX: How many seasons would you like to see HUMANS go in terms of the narrative that you’ve envisioned?

BRACKLEY: Well, we only plan one season ahead. That’s the way we like to work. We don’t like to have a road map worked out for seven years in advance. It kind of takes the fun out of it somehow and the spirit of discovery. We really like to know where our story is going next season, we plan really well for that, but beyond that, we like to leave it unknown. I think that A.I. as a subject in the public consciousness is so pressing and relevant, people are so interested and it’s moving so fast that reality will feed our story for awhile to come, and I think it could run for certainly more seasons. But I’m not prepared to put a number on it, really. But yes. As long as we can keep drawing our inspiration from reality, we can keep telling the story.

AX: And what would you most like people to know about HUMANS Season 2?

BRACKLEY: Yeah. I would say that one thing we can definitely say is that the conscious synths that we got to know in Season 1, they are not the only conscious synths in Season 2. We are going to be joined, and consciousness is going to go in all kinds of different directions, and it’s a really exciting series that builds to a hell of a climax.

This interview was conducted during AMC’s portion of the Winter 2017 Television Critics Association (TCA) press tour in Pasadena, California.