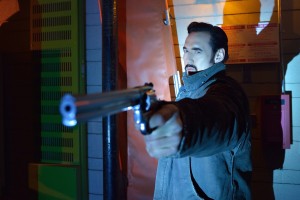 In FX Networks’ THE STRAIN, now in its third season Sunday nights, New York has been overrun by the strigoi, a particularly vicious type of vampire under the control of the Master. A small group of humans are trying against all odds to defeat the Master. These include erstwhile NYC vermin exterminator Vasiliy Fet, played by Kevin Durand, and ex-petty criminal Augustin “Gus” Elizalde, played by Miguel Gomez.

Durand makes himself available at a party thrown by Fox and FX Networks at West Hollywood’s Soho House. The following day, both he and Gomez sit down together at the Beverly Hilton Hotel for further discussion of THE STRAIN.

ASSIGNMENT X: Do the two of you, as Fet and Gus, get to have more scenes with each other in Season 3?

KEVIN DURAND: Well, it’s pretty easy to say more, because we haven’t really had much opportunity in the first couple of seasons. So we actually join up a bit more, but not enough. Hopefully, we get another season and we’ll get to do even more work together.

MIGUEL GOMEZ: That would be awesome. I love working with Kevin. Those are my favorite days on set, because we have a lot of fun. This season, we do get to work together a little bit more than we have in the past, so that’s always fun.

DURAND: They’re probably coming from a similar place, too. They’re both survivors, there’s just I think an immediate shorthand between them.

GOMEZ: Yeah, I think the latter. For Gus, I think he’s somebody that, yeah, he’s the enemy of my enemy, but at the same time, I don’t trust him, because I don’t know exactly what his motives are, so it’s kind of up in the air.

DURAND: Fet has a particular problem with him, because he, as you’ll see in this upcoming season, he’s helping Setrakian analyze and translate the Lumen, and so Fet feels pretty helpless that he can’t contribute. I almost feel like he’s kind of taking my spot in a way, and yet I really don’t trust this guy at all, but how do you stop him? So I have all this bravado, and yet, deep down, it’s like, I don’t know that I can ever really step up to this freak. So it’s a really interesting relationship. And Rupert is amazing. He’s pretty stunning. So when you’re in the midst of doing these scenes, that cold, icy stare, it gets you. [laughs] It really does.

AX: In Season 3, it seems like we kind of start out with Vasiliy Fet and Abraham Setrakian Show on one side of things …

AX: Now, in the books, Fet got together with Nora, but clearly that is not happening, since she died at the end of Season 2 …

DURAND: [laughs] Yeah, that would be a totally different show.

AX: On the other hand, he’s pining for Dutch. Were you aware when you got the part that Fet was going to have such a complicated love life?

DURAND: No. I had no idea. Going from a series of books to making a TV series, in the beginning, when I read the books, it was like, “Okay, so this is the show that we’re going to make.” And as you jump aboard, it becomes its own living organism, and certain things really work, certain things don’t vibrate quite as well. There are different directions that they go into. They have this wonderful base to launch off of, which is the narrative that we get from the books, and they’ve been able to flesh it out more as they’ve developed this series, so it’s been really exciting for all of us to show up to set every day, get the new script, and be like, “I have no idea what’s going to happen next.” And that’s more interesting to us. I’m hoping that the audience fells the same way. Because if we were just following the books to a T, then there would be no surprises.

DURAND: [laughs] The action scenes in film and television, as a younger actor, I did a lot more of, and I love being physical doing that kind of work, but to me, from the beginning of my career, it was always about the dialogue scenes, the character-driven scenes that I could really sink my teeth and claws into and try to find some kind of compelling truth that will help to live up to what they’re writing for Fet. So I always look forward to that. Love scenes are a little bit awkward, to be quite honest [laughs]. I don’t know if you’ve heard, but my wife and I have a deal where it’s like, whenever I have to make out with some woman on screen, I have to buy her a bag of her choice. So every time that happens, I’m getting poorer, so I don’t necessarily look forward to those [laughs]. She hasn’t collected on any of the bags, but her credit line is through the roof.

GOMEZ: The kissing scenes are always the hardest. I don’t have any preference. It’s all inclusive, it all works together. It doesn’t matter.

AX: Do you have a favorite scene from Season 2?

DURAND: You know, that’s really hard for me to pinpoint. I really enjoy the scenes with Ruda Gedmintas [as Dutch], where we’re really digging into the heart and soul of what that relationship is or was. There seems to be a sincerity and it’s just very visceral to work with her. I never know where she’s going to go. She doesn’t know where I’m going to go. So every time we do a take, it’s usually very different and it’s really fun working with her.

AX: You get thrown around a lot. Have you developed an expertise in that, or is that still kind of difficult?

DURAND: Yeah, any chance that I have to be physical, I probably expound on it, throwing people around and being thrown around, it’s all part of my job definition.

AX: And you got to do some major badassing when Gus staged a prison break, so how was that?

GOMEZ: That was cool. We actually shot in a real prison. I could feel the energy, believe it or not, in that place. It was closed only, I think, for a couple years. You still see writing on the walls, you see blood on the ceilings. It felt really real and really scary. It was a scary place. But it was fun to shoot that scene with everybody.

AX: You played one of the boxers in the film SOUTHPAW. Do you have boxing, or some other kind of physical discipline in your background?

GOMEZ: Yeah, I boxed a little bit when I was a kid, but most of SOUTHPAW was – we trained for six weeks as actual fighters. I’m a southpaw, I’m a leftie, I had to learn how to fight right-handed.

AX: Has any of that come in handy in THE STRAIN?

GOMEZ: All the time.

DURAND: When he’s throwing out some punches, you hardly see his hands. He’s an incredible fighter, very worthy of his badass status.

AX: Do you have a sport in your background?

DURAND: I have a lot of sports in my background, but hockey was my primary.

GOMEZ: He was a guard. If you would mess with one of their players, they sent Kevin.

DURAND: [laughs] Yeah. The athletic background I find is very helpful for me in this business, because when things weren’t going so well as an actor, I could always take it to the gym and let it out, let out those frustrations and not let it build up inside of me. I could just release the demons in the iron.

AX: Is THE STRAIN a good show for releasing demons, so to speak?

AX: You both use guns that are supposedly shooting projectiles. What do they actually do when you’re holding them?

DURAND: It depends. Sometimes they’ll actually use quarter- or half-blanks, which actually you’ll get some recoil from. And then sometimes they just don’t want anything, so they’ll just completely color it in [with CGI]. So it depends on your proximity to whoever you’re shooting. If you’re too close, they don’t want to risk it, obviously. If you’re just shooting at nothing, then it’s okay, they’ll give you a half-load, a quarter-load.

AX: Do you enjoy the weapon actually firing, or when nothing is actually happening with the prop, do you enjoy that, or are you busy thinking, “I’d better make it look like there’s a recoil”?

GOMEZ: I like it better when it actually shoots.

GOMEZ: It helps me, kind of gets my blood flowing.

DURAND: This year, I got to shoot this giant automatic chain-fed [weapon], it was like fifty pounds, and when I actually got to let it go, there was a reaction on my face, and they showed it to me. It’s real. I was like, “Oh, my God. What the hell? I could kill King Kong.” [laughs]

AX: Are you still on VIKINGS?

DURAND: That’s a good question. I haven’t gone back yet this year, but who knows how long that show is going to go. I love Michael Hirst and luckily, we have a really good creative relationship. Who knows when that may come to fruition again? If it will, then great, if it doesn’t, I’m grateful for the time that I’ve been on the show.

AX: Which are colder, the night scenes on THE STRAIN, or the snow scenes in VIKINGS?

DURAND: Well, I’ve pretty much only shot interiors on VIKINGS, but I have to say that the Canadian winter far outweighs the Irish summer in terms of cold temperatures. I haven’t been in Ireland during the winter, but the Canadian winter is definitely a lot more severe.

AX: Has working on THE STRAIN changed the way either of you guys think about human good and evil, or has it reinforced what you already thought, or do you think about it much?

GOMEZ: I think it just shows how strong a group of people can actually be when they come together and are all fighting for one cause.

DURAND: That’s right. I’m riding on what he said [laughs].

AX: What would you most like people to know going into Season 3?

DURAND: From a totally selfish perspective, if for the fans of the show that relate to Fet somehow, or feel moved or compelled by him, it’s a season where we’re really going to peel away the layers of the onion and kind of see beneath the macho bravado that he has. It was a lot of fun and a challenge to play. And then also there’s a lot more throwing things around and being thrown around. It’s a huge season and many different times throughout the season, we all kind of looked at each other like, “How is this a TV show?” It’s just so massive and exciting. It felt really epic this year. I haven’t seen it, so I hope it comes off the way it felt while we were shooting it.

This interview was conducted during Fox Network and FX Networks’ portion of the summer 2016 Television Critics Association press tour.