THE FLASH interview with star Jesse L. Martin on Season 3

©2016 The CW
Jesse L. Martin in THE FLASH
Interviews

The actor contrasts his cop roles 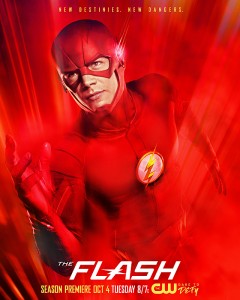 THE FLASH begins its third season on The CW Tuesday, October 4. Since the Flash, aka Barry Allen (Grant Gustin), just altered the past in the second-season finale to save his mother, there’s no telling what the present will be like. This includes Barry’s relationship with his erstwhile foster father, Central City police detective Joe West, played by Jesse L. Martin.

Martin, originally from Virginia, is famous to Broadway theatergoers for his stint in the original cast of RENT; he reprised his role in the film version. Martin is probably best known to television viewers for playing another police detective, NYPD’s Ed Green, on a decade of LAW & ORDER. Meanwhile, executive producer Greg Berlanti has announced that THE FLASH and the other D.C. Comics/CW shows that exist in the same universe – ARROW, LEGENDS OF TOMORROW and SUPERGIRL – will have a musical crossover that spans all four series, so Martin will get to show off his considerable singing chops in character as Joe.

AX: Was being in the original cast of RENT anything like being in THE FLASH in terms of fan reaction? Were they treating you like you were kind of a superhero in those days?

AX: After that experience, how do you decide what to do next?

MARTIN: Well, it’s funny when people ask actors how do they decide, because actors, no matter how much work you’ve done, you always feel like you might not ever work again. So choice is subjective, meaning that you get an offer first, and then you go, “Oh, I got an offer.” And almost every actor just wants to take it, no matter what it is, and hope that it works out, and hope that it’s great and good. But I’ve worked a lot over the last couple of years, so this was actually a choice. I chose to be part of this thing. I was glad to get an offer, but I chose to be a part of this thing, and I feel good about my choice. I really do.

AX: Which kind of series would you say is more interesting for you as an actor, THE FLASH or LAW & ORDER?

MARTIN: Well, it depends on what kind of an actor you are. LAW & ORDER was so very interesting to me, because what I got to do was explore New York, not to mention working with some of the best actors New York City had to offer. So that was supremely interesting to me. But I did it for almost ten years. That’s done as far as I’m concerned. So here I am in a whole new world, and I think that they do some amazing things. I mean, there’s a lot of green-screen stuff I’d never done before, seeing people in these amazing costumes they come up with, meeting these characters who aren’t even human. So it’s phenomenal.

MARTIN: Well, first of all, the things that he has to deal with. Yes, there are some crazy situations in New York City, and Eddie Green got to deal with a lot of those crazy situations. But nothing compares to this – people who can control the weather, meta-humans everywhere. There’s constantly something going on. Not to mention, I have a family to worry about, who amazingly get themselves in danger every single day, it seems. So Eddie Green on LAW & ORDER didn’t have to deal with any of that. Joe West has to deal with it constantly, not to mention go home and make dinner for the babies [referring to Barry, plus biological children Iris, played by Candice Patton, and Wally, played by Keiynan Lonsdale].

AX: Do you want Joe to have scenes with Barry and Iris and Wally where he says, “Maybe all of this craziness you get into isn’t your fault, but it happens every week … so I want you to sit here and just not move until you’re about fifty years old …”?

AX: When Michael Douglas did ANT-MAN, he said, every actor wants now wants to be part of a comic book franchise. Was that part of the draw for you?

MARTIN: Yeah. I mean, I have a friend, his name is Michael Capone, he is a super-super-super-geek. He’s a comic geek, he knows everything. He’s the same age as me, but he’s like a kid when it comes to comics and things like that. When I mentioned to him that I was even meeting these guys, and I mentioned [co-creator/executive producer] Geoff Johns’ name, he freaked out and said, “If you don’t take this job, you’re crazy. You’re absolutely crazy.” And then he was the one who sort of introduced me to that big, giant world out there of all these people who loves this stuff and will do anything for this stuff, they will go to every Comic-Con all over the world to see this stuff. And I’m psyched. I’m like, “Hey, the audience is here already, all we’ve got to do is do it right.”

AX: How much did you know about THE FLASH as a story when you started?

AX: How much incredulity does Joe have about the stuff around him? Does he ever get used to it?

AX: Do you have any plans to go back to Broadway?

MARTIN: Yes, I want to go back to Broadway, I have no idea what I’d do. Lately, it’s been Shakespeare. The last thing I got to do on Broadway was MERCHANT OF VENICE with Al Pacino, so a little bit more of that would be real, real nice.

AX: You grew up in the Blue Ridge Mountains. Do you think there was something in your upbringing that laid the foundation for the career you have now?

MARTIN: Well, humility is one thing. I grew up in a huge, huge family with a whole bunch of kids, so you never got too full of yourself. It’s true to this day. I go home and it doesn’t matter what I’ve done, who I’ve worked with, whether they saw me on TV that morning or in a film the night before, I’m still Jesse to them and that keeps me going.

I had expected to just hopefully get a job somewhere and be part of a union, like Actors Equity. Once I got my Equity card, I thought I had totally made it. I couldn’t pay any rent or anything like that, and I was barely eating well, but I thought I’d made it. And then of course I got to Broadway and I did a tour once when I got out of school, and I thought, “If I just do this, I’m good. I won’t live in a mansion, and I’ll probably still eat noodles, but it’s a good life. It’s a really good life.” What I’ve got is way beyond that.