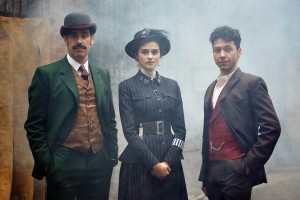 Exclusive Photos from ONCE UPON A TIME at the PaleyFest 2012
Blu-ray and DVD Reviews for the Week of May 19, 2015
DICKENSIAN and RIPPER STREET soundtracks - CD Reviews
THE RIGHTEOUS GEMSTONES: Creator and star Danny McBride on Season 1 - ...