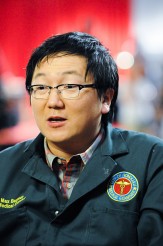 The actor gives an update on working in Hawaii 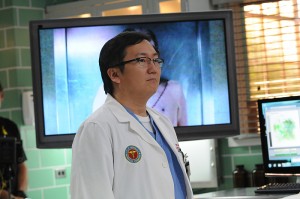 HAWAII FIVE-0, CBS’ sturdy reboot of the original 1968-1980 island cop show, is now on Fridays in its sixth year and renewed for a seventh. Masi Oka joined the cast in the show’s second year as coroner Dr. Max Bergman, who helps McGarrett (Alex O’Loughlin), Danny Williams (Scott Caan) and their team investigate crime for the police department in the paradise-like environment.

We caught up with Oka at a party held by CBS on the roof of West Hollywood’s London Hotel for the press to ask how he’s enjoying his HAWAII FIVE-0 gig.

AX: So how are things going on HAWAII FIVE-0?

MASI OKA: It’s going great. We got picked up for our [seventh] season, so we’re back at it in July.

AX: How are you enjoying the expansion of the cast? Since you came on, there have been a number of additions.

OKA: Chi [McBride, who plays former Chicago SWAT chief Lou Grover] is fantastic, Jorge [Garcia, who plays Jerry Ortega] is  fantastic. I think it’s great to have more cast. It would be nice to have more females as well.

AX: Are you starting to feel like your very own little Comic-Con, because so many people are from different cult shows? You’re from HEROES, of course, Alex O’Loughlin was the vampire lead on MOONLIGHT, Grace Park is from BATTLESTAR GALACTICA, Daniel Dae Kim and Jorge Garcia are both from LOST and Chi McBride is from PUSHING DAISIES.

OKA: Yeah, I don’t know why, but I guess it is. Maybe Peter [Lenkov, executive producer and show runner] just fixed them like that. Go figure. I don’t think it was on purpose, but it just happened to be that way.

AX: Do you have a favorite scene, favorite episode?

AX: How did you feel about leaving Hawaii to shoot episodes of HEROES REBORN in Toronto? Were you looking forward to working outside of Hawaii, or were you going, “Well, wouldn’t HEROES be better if it was in Hawaii?”

OKA: [laughs] Yeah, it would be much better if it’s in Hawaii, yes. I’d never shot in Canada. The travel is the killer. I love the locations, it’s just the traveling. And I’m getting older, so the travel hours just take a beating on you.

AX: Have you had any input into either HAWAII FIVE-0 or HEROES REBORN, as far as what your characters get to do?

OKA: No. I’m not producers on those shows, so I believe that’s not my place, so I let them do their jobs. If there are certain things that seem awkward, I might make a suggestion, but at the end of the day, we don’t see the macro picture, so we don’t know what they’re thinking for the entire arc. A lot of times, I’ll have a comment on an episode here and there – “What about this, what about this?” But a lot of times, we don’t understand the overall picture, so we get obsessed, like, “My character wouldn’t do this.” But [the writers say], “We need to do this so it pays off later on.”It kind of gets dangerous at times, but for me, I’m not a producer on the show, I’m producing a lot of other stuff, so in this, I’m working as an actor, and I’m happy that way. I leave it to the powers that be.

AX: As a producer, what are you working on, and how is it going?

OKA: It’s going pretty well. The closest thing right now is probably DEATH NOTE, a movie [based on a manga]. We have Adam Wingard now attached to direct, and I’m producing that with Dan Lin and Roy Lee and Jason Hobbs. Four other movies right now in development, which I can’t really talk about yet, because they haven’t been announced, and I’ve got my gaming studio. We released a mobile game called TERRA CHROMA, “Land of Color,” which we’re very proud of. That came out on IOS and Android.

AX: Is TERRA CHROMA aimed at all ages?

OKA: All ages, yes. I don’t like any violent games, so it’s a smart puzzle RPG game, and it uses colors – you’re drawing Tetris-like pieces and creating magic. It’s a puzzle game, so if you like puzzles, I highly recommend it. It’s not free, but you don’t pay more than two bucks. It’s reasonable, because we’re not gouging you on ads. We’re an indie developer, and I like to keep it that way.

OKA: It’s great to be working. Things happen. We’ve had an amazing run. I think six years is a fantastic run. So if there’s a Season 7, a Season 8, fantastic. If Season 6 [would have been] our last season, that’s great, too. In this day and age, to be on the air for more than four seasons, or even more than one season, is a blessing. So we’re very grateful for that. We’re very blessed.

AX: Anything else you’d like to say about HAWAII FIVE-0 going forward?