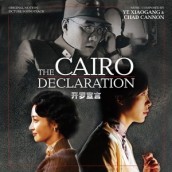 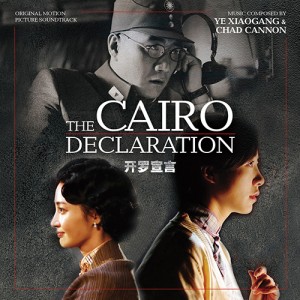 Nothing seems to inspire glorious feelings for The Motherland like a flag-waving symphonic score, its citizens’ devotion embodied in majestically swirling melody. But then, you don’t have to open your Little Red Book to appreciate the stirring patriotism that westerner Chad Cannon, along with Chinese composer into THE CAIRO DECLARATION, creating the most sumptuous music to accompany a historical event most listeners on this side of the Atlantic have never heard of.

The 1943 meeting between FDR, Churchill and soon-to-be overthrown Chinese ruler Chiang Kai-shek decided the who’d get Japan’s occupied territories once Tojo went down in flames – with the Island of Taiwan’s inevitable rule by Kai-Shek a remaining thorn in China’s pride. But here it’s all about future party crasher Chairman Mao guiding his country to glory, marshaling a swaggering epic full of romance and noble fighting – emotions considerably met by Cannon and Xiaogang.

Beginning his career as an additional orchestrator to empower the reptilian force of THE DESOLATION OF SMAUG and GODZILLA, Chad Cannon’s first major work as a composer is a grandly engaging historical opera, his fluency with Oriental rhythms impressively abetted by Xiaogang (“Shower”). With nationalistic movies of this sort getting a bit more sophisticated since The Cultural Revolution, Cannon and Xiaogang’s bring impact instead of roof-shouting patriotism to THE CAIRO DECLATION for an especially smart and melodic score in the genre. There’s a terrific sense of momentum to their here, conveying a race against time as Japan and Nazi Germany’s clocks run out, reflecting both the weight of world powers and the innocents caught within it. The lush, romantic approach of John Barry and Nino Rota can also be heard in CAIRO’s writing that makes signing a document as exciting, and emotional as possible, militaristic rhythm, pastoral strings, proud brass and tender strings getting equal measure in this impressive well-performed score by the Czech Symphony Orchestra, the album getting an especially lovely end son with “Pray.” But whatever one might think of who got the spoils of a horrible war, let alone Chairman Mao as ac action hero, THE CAIRO DECLARATION announces Cannon and Xiaogang’s epically humane talents with a consistently engaging twenty one gun symphonic salute to The Supreme Leader that’s universal, and apolitical in its impact.

Click on the link to buy the THE CAIRO DECLARATION soundtrack