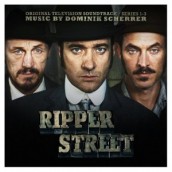 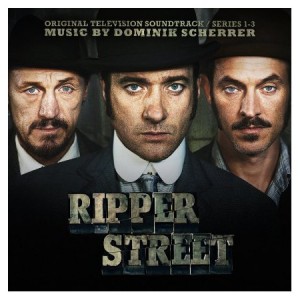 The music of Victorian-to-Edwardian England has never been more interesting given the likes of Hans Zimmer’s SHERLOCK HOLMES, Charlie Mole’s MR. SELFRIDGE and John Lunn’s DOWNTON ABBEY. When given the spirit of such TV dream-team mash-ups like PENNY DREADFUL, the antiquated approach becomes positively hopping, especially as heard on English label Silva Screen’s releases of the BBC soundtracks to Debbie Wiseman’s DICKENSIAN and Dominik Scherrer’s RIPPER STREET, shows whose desperation-caked cobblestones ring with exciting, unbuttoned vibrancy.

DICKENSIAN is turns the Marvel Universe into the Charles Dickens one as literary superheroes from such classic novels as A CHRISTMAS CAROL, GREAT EXPECTATIONS and THE OLD CURIOUSITY SHOP search for the clues to unveil just who killed Scrooge’s partner Jacob Marley. It’s a most clever concept that brings out an especially playful side to composer Debbie Wiseman, a composer who’s managed to do impressive work while being corseted in costumes for dire period drama on the big and small screen like WOLF HALL, MY UNCLE SILAS and WILDE. Now really getting to loosen up with the mystery that’s afoot, Wiseman employs the quizzical cimbalom playing of Greg Knowles to pokily percussive delight. It’s m

usic that you can imagine hearing if Oliver Twist matched wits with Arthur Conan Doyle’s detective from Baker Street. Yet for all of “Dickensian’s” high concept eccentricity, there’s no denying the melancholy of miserable childhoods and abusive adults that have made the triumph of the author’s heroes so affecting. Wiseman’s beautiful, low-key orchestral writing for The Locrian Ensemble of London gives DICKENSIAN the pensive effectiveness of the sad souls that the author rallied for, all while being as fun as this material might allow.

Detective Inspector Edmund Reid and his Whitechapple coppers have investigated all sorts of post-Jack malfeasance in London’s worst neighborhood for this long-running series (with season 4 now to be seen on America’s Amazon Instant). It’s a RIPPER STREET paved with menacingly energetic consistency by Swiss composer Dominik Scherrer. Though he’s scored far-less roughhousing TV representatives of the English law like Miss Marple and George Gently, the no-nonsense H Division gives this music a particular, brute efficiency in combining such period-specific instruments as the cimbalom and fiddle with cool, modern-era 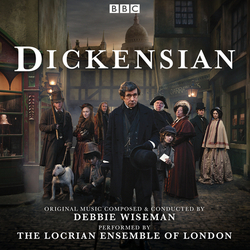 percussion. It’s an approach that worked well for Zimmer’s take on Sherlock Holmes, and takes the gentlemanly gloves off here for very good measure in Scherrer’s hands. His STREET is given a mean fusion of orchestral propulsion and sampled rhythm, music that collectively gives the first three season soundtracks assembled here a riveting sense of drive. But there’s more than rhythmic intensity to Scherrer’s approach as poetic melody also shines under its candle-illuminated spotlight. As played for haunted electric atmospheres and an aching violin, Scherrer lets us feel the high moral price paid to keep RIPPER STREET clean, a mournful lyricism every bit as powerful as a beat that could easily accompany a Yank CSI team investigating a serial killer. That’s all the more reason why RIPPER STREET‘s score is effective in conveying the sound of turn-of-the-century England as it is the 21st century detective propulsion that could accompany a Yank CSI team on the trail of a serial killer, though it’s likely those investigators wouldn’t be singing a drinking hall chorus of “Eight Little Whores.”

Click on the link to buy the DICKENSIAN soundtrack

Click on the link to buy the RIPPER STREET soundtrack