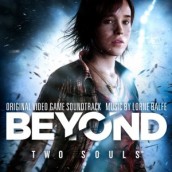 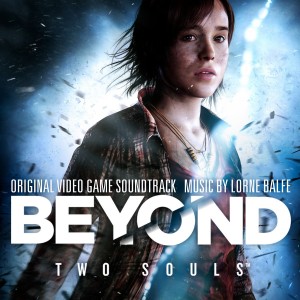 Good, if not excellent things can come to those who wait, which can be especially frustrating when it comes to a world where instant, visual gratification always comes first before music that can be equally as gratifying (if not more so) than the game it’s attached to. Now finally after three years, listeners will finally get to dive into Lorne Balfe’s terrific score for the 2013’s BEYOND: TWO SOULS. Game creator David Cage’s attempt to break down the line between movie and controller by having the player make choices that would creates fateful ripples across the rest of his experience – a la Cage’s seminal detective-themed HEAVY RAIN, as now given a sci-fi veneer. But where the ambition SOULS ended up being more like watching a movie with some passive play than the fully interactive experience it intended to be, Balfe’s score truly elevated BEYOND into a spectral, mind-bending musical realm that proved itself to be the genre’s answer to INCEPTION when it came to expanding the melodic consciousness of game scoring.

That Lorne Balfe was an essential part of Hans Zimmer’s team with additional music on THE DA VINCI CODE, THE DARK KNIGHT and INCEPTION (a score that he also co-produced) says much for the epic orchestral element that distinguishes SOULS  – not to mention Balfe’s own music for such propulsive action games and films as CALL OF DUTY: MODERN WARFARE 2, ASSASSIN’S CREED: REVELATIONS and TERMINATOR SALVATION. By virtue of its length, BEYOND: TWO SOULS  just might have had the most complex and involving plot of any of them as it explored the link between hunted government operative Jodie (Ellen Page) and her lifelong relationship with “Aiden,” a seeming alien symbiote closely watched by her scientific father figure Nathan (Williem Dafoe). Cast out of her assassin agency (is there any other kind?) and on the run, BEYOND took Jodie into the homeless streets, a lab possessed by spirits and a Native American reservation, all leading to her ultimate understanding of Aiden’s true role in her existence – a gobsmacking revelation if there ever was one. While there were no shortage of guns to fire and creatures to fight, BEYOND: TWO SOULS was far from the mindless first person shooting fun, allowing Balfe to write an uncommonly emotional score that stands as his best work.

There’s a truly beautiful thematic empathy to BEYOND: TWO SOULS, beginning with a mournful, vaguely Oriental theme for Jodie, a little girl lost given a heavenly female voice and lush, assuring strings. It’s a gorgeous melancholy that haunts much of the score, where lullaby bells and poignant strings become her tormented childhood link to Aiden in “My Imaginary Friend.” A somber violin accompanies Dawkins angst-filled theme, whereas the invisible Aiden receives a ghostly theme of suspended strings and the beat of piano lost in some twilight zone, an “Infraworld” that fills with the vengeful force. It’s a determined momentum that drives “The Experiment,” where Aiden’s eerily building, spectral rage has a drum-kicking momentum to rival any of Leo’s dream team (maybe it’s not-so ironic that “Inception” cast member Ellen Page was recruited for this as well). But for the most part, BEYOND: TWO SOULS is concerned with death and transfiguration, with Balfe’s theme finally bestowing a profound sense of deliverance. It’s a feeling of one’s place in the cosmic birth chord, and a game struggling beyond that to break the confines of being just mere button-pushing entertainment. At the least, Lorne Balfe’s gorgeous score certainly wins on that boss level.

Click on the link to buy the BEYOND: TWO SOULS soundtrack