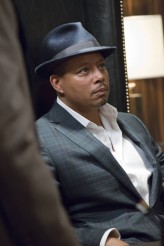 The co-creator talks directing and new characters that pop 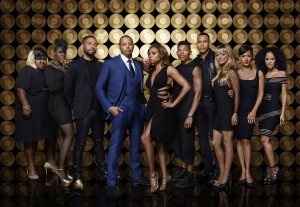 At Fox Network’s party for the Television Critics Association, Danny Strong is mulling over the dessert options. Strong is at a place in his life where most of the choices are sweet. The California native co-created Fox’s epic musical drama hit EMPIRE. Strong got an Emmy nomination for his first produced script, HBO’s RECOUNT, about the 2000 U.S. presidential election, and won an Emmy for his second, HBO’s GAME CHANGE, which starred Julianne Moore as Sarah Palin.

Strong wrote LEE DANIELS’ THE BUTLER, about the intersection of civil rights and the U.S. presidency, which Daniels directed. That collaboration led to the two joining forces on EMPIRE. Strong has directed three episodes of the series (one of which is the midseason premiere, airing Wed. March 30), and is now about to direct his first feature film.

Besides all of this, Strong hasn’t turned his back on his original career: acting. Known to BUFFY THE VAMPIRE fans as Jonathan, Strong will be reprising his recurring THE GILMORE GIRLS role as Doyle McManus in the Netflix miniseries revival of that series.

AX: In all of EMPIRE’s success, what has been the most exciting aspect for you – getting to direct, the popularity, the awards, something that we may not know about …?

AX: Well, that was very good …

STRONG: I love getting to direct. Remember the [EMPIRE] White Party episode, when Jamal [played by Jussie Smollett] came out? That was my directorial debut.

AX: Are you learning about writing the show through directing it?

STRONG: No, not really. It’s sort of a different thing. It’s like the directing is a continuation of the writing, but not really the other way around.

AX: Does it free you up knowing that, okay, I don’t need to worry that somebody is going to completely misunderstand this?

STRONG: It’s less fear-based and more, “I can keep making it better.”

AX: So if you left something out in the writing, you can put it in or change it during the directing process?

STRONG: Yeah. But also when you give it to someone else to direct, you have to kind of give it up. In some ways, I emotionally detach from it, because I can’t be responsible for things they do, if they screw it up, or mistakes they make, because I’m not in control of it. But when I’m directing it’s all mine. And it’s a lot more pressure, but I prefer it.

AX: You directed the episode where Jamal gets a photo/painting portrait done of himself that looks like one of those Sixties album covers. Did you design, or have a hand in designing that artwork?

STRONG: [joking] Yeah, I painted it. [serious] No. They showed me a bunch of different images and I picked that one.

AX: Your old BUFFY colleague Adam Busch played Chase One, the photographer who took the photo within the show. Were you responsible for him being cast?

STRONG: I was. But Lee Daniels really wanted him, too. I didn’t write it for Adam. It was supposed to be a male model, it was supposed to be someone drop-dead gorgeous, and we auditioned a bunch of people that were drop-dead gorgeous, and I was like, “These guys are all drop-dead gorgeous, but they don’t look like Brooklyn artists to me.” And I thought, “My buddy Adam Busch looks like a Brooklyn artist.” So I had him come in and audition, and then I submitted two choices. I said, “Here’s the model choice, and here’s a choice that I think is much more realistic.” And Lee Daniels was adamant that it be Adam, because he’s, “That’s the truth.”

AX: Now, was the reason he was originally supposed to be a beautiful guy to make it a sexual threat to Jamal’s boyfriend?

AX: But wouldn’t someone who could communicate with Jamal on an artistic level also be a sexual threat?

STRONG: That’s what Lee and I thought. We thought it would be more layered and interesting and Jussie Smollett, who plays Jamal, loved it that it was Adam Busch, that it wasn’t a model, that it was like – that he was getting seduced by talent, by his intellect. Didn’t Adam do a great job?

AX: Do you have a character that’s popping for you in a way you didn’t expect at the beginning? Taraji P. Henson’s Cookie has maybe popped in a way that nobody could have predicted beforehand …

STRONG: I don’t know. I think everyone is doing great. This season, Freda Gatz [played by Bre-z] is an amazing character, Bre-z has done a wonderful job. I think that character has really popped. Thirsty, Andre Royo, everyone knows he’s a genius, but that character, he’s so funny in the part.

STRONG: I’m about to go make a movie about young J.D. Salinger, that I’m directing, that I wrote, REBEL IN THE RYE. Nicholas Hoult is playing J.D. Salinger.

AX: Are you excited, are you at all scared …?

AX: Is the film maybe going to be a little bit easier than the EMPIRE episodes because it’s not a musical?

STRONG: Well, I have a lot more time. I mean, [on EMPIRE] you shoot forty-five pages in eight days, including four musical numbers, so to have thirty days to do a hundred and twenty pages is going to be nice.

AX: Are you doing REBEL IN THE RYE on the EMPIRE pre-production/production break between seasons, or are you going to have to step away to do it?

STRONG: It’s on the hiatus.

AX: Do you think that somewhere down the road you might do a script about the Republican primaries?

STRONG: Who knows, who knows? We’ll see what happens. It’s pretty dynamic, though. And it’s one of those things that I think is a profound moment in American politics that is telling us about where this country is at that the way that the 2012 election didn’t feel like a profound moment in American politics. Every election, both candidates say, “This is the most important election of our lifetimes.” I mean, you hear it every single election. 2012 did not feel like the most important election of our lifetime. I don’t know if this will be the most important election of our lifetimes, either, but certainly, seeing a candidate like Trump that is so anti-establishment, that is so not part of the Republican establishment, yet is so embraced and so successful, is just highly representative of where the Republican Party is at.