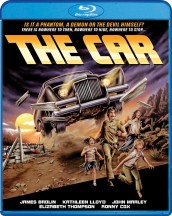 An all too obvious JAWS rip-off from 1977 replacing the shark with a car?!? 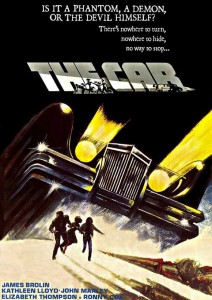 You have to hand it to Universal Pictures in 1977. Still reeling from the blockbuster success of JAWS in 1975, they were clearly anxious to replicate that success. Instead of immediately dipping back into shark-infested waters, they tried something else with THE CAR.

Taking the major beats from JAWS and replacing the shark with a demonic car, it seemed as if this would be a clever way to rip themselves off, but not so much that most people would catch on to it. If you want to go even deeper into ripping themselves off, Steven Spielberg’s 1971 made-for-TV movie DUEL also featured a demonic vehicle which this certainly echoes as well.

The end result is a very, very bizarre movie that is at times incredibly clever and resourceful and other times completely bone-headed and inept.

James Brolin plays the town’s new Sheriff Wade Parent whose first order of business is to deal with a mysterious car mowing down residents of a small town. At first, he thinks it’s a person doing this, but as the film progresses, it’s clear there’s something far more supernatural at work here.

The opening of the film is actually quite effective, even trying to pay homage to the John Williams theme from JAWS during the car’s first attack. It’s well shot, creepy and a near-perfect intro. If only the rest of the film had this same kind of ingenuity.

Long stretches of painfully awkward character building never captures the magic Roy Scheider has with his family in JAWS. The set pieces with the car range from spectacular to laughable. Then again, you know what you’re getting into when you watch a movie about a demonic car.

Perhaps the most effective moment occurs when the car rams right through a house. It’s all practical, no CGI (yes, this pre-dates CGI folks) and completely awesome.

THE CAR, flaws and all, is still above average at times despite its shamelessly obvious attempt to cash in on JAWS. Once again Shout! Factory does a superb restoration. The film looked horrible on VHS or DVD (washed out and cheap), but here, for once, you realize there was studio money at play here. The film is actually quite gorgeous at times.

There’s new interviews with director Elliot Silverstein and actresses Melody Thomas Scott and Geraldine Keams. It’s here where Sulverstein admits to having a Universal mandate to bring the magic of JAWS to a new setting. Other featurettes include a theatrical trailer, TV spot, radio spots and a still gallery.