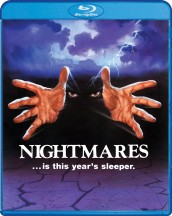 A hit and miss anthology film from 1983 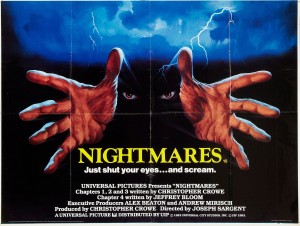 Despite its uneven quality, 1983’s NIGHTMARES has been a much desired film to get a much-deserved Blu-ray release. Originally salvaging rejected scripts from the 1981 anthology TV series DARKROOM (because they were too intense), producer (and writer of three of the stories) Christopher Crowe took the scripts and transformed them into a four-part anthology film.

With all anthology movies, the entries a pretty hit and miss – and the lengths vary as well – with some entries coming in way too short and others feeling way too long. However, like all 1980s horror films, this has some charm to it. It’s also great to see a very young, pre-THE BREAKFAST CLUB Emilio Estevez and of course genre stalwart Lance Henriksen liven up some of these entries.

“Terror in Topanga” focuses on the story of a chain-smoking mom (Cristina Raines) who sneaks out of the house to buy a pack of cigarettes even though she’s fully aware a serial killer is on the loose. The pay-off is a familiar urban legend trope, but this is by far the strongest entry of the bunch. It’s short and sweet (but could have been longer) and is exactly what the suspense doctor ordered.

“The Bishop of Battle” is heavy on early CGI effects featuring Estevez as a video game hustler who tries to get to a supposedly unattainable level on a video game, only to discover the game is from out of this world. Some cool effects, although the story itself will only have resonance with those that grew up in the 1980s and spent endless hours at the arcade.

“The Benediction” is a frustrating entry because it has the always exceptional Henriksen but a story that has been done better in the past (DUEL, THE CAR). Henriksen plays a priest who has lost his faith and leaves his parish only to be terrorized by a demonic vehicle (sound familiar). This segment could have been much stronger and far longer. Instead, the pay-off is a bit weak despite a few clever beats of road action.

Finally, “Night of the Rat” is the weakest of the bunch (and the longest). An asshole dad doesn’t want to get an exterminator to take care of a demonic (and super-large rat) living in his house. There are few spooky moments, but this one becomes quite ridiculous at times – and hindered by the thoroughly unlikable character Masur is forced to play. I did love the stuffed animal rat his daughter has. Nice touch.

Overall NIGHTMARES still feels a bit too TV for its own good. The R rating is hardly justified. It could have been edgier (given the rating), and it would have been nice if the stories themselves were less of a hodge-podge and more focused in being of a similar type.

The great thing about this Shout! Factory release is the first time the movie is presented widescreen 1:78:1 (you get the original full frame aspect ratio 1:33:1). That really opens up the look of the film. There’s so much more to see now and it feels cinematic – something you’ve never been able to see prior to this home entertainment incarnation.