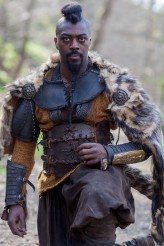 © 2016 NBC/Universal
David Ajala stars as Rate in BEOWULF: RETURN TO THE SHIELDLANDS
Interviews

In Esquire Network’s new series BEOWULF: RETURN TO THE SHIELDLANDS, Saturday nights, Kieran Bew plays the title hero. Not only does his Beowulf have to defend the legendary kingdom of Hierot against monsters and himself against the jealous prince Slean, portrayed by Ed Speleers, but he’s got to figure out how to contend with the other tribes of ancient Scandinavia.

One tribe is the Vardi, led by the thane Rate, played by David Ajala. Ajala (pronounced Ah-Jah-Lah) , from London, England, has starred in the British TV series TREXX AND FLIPSIDE and the ABC Network drama BLACK BOX in the U.S., guest-starred on DOCTOR WHO, and appeared in feature films including THE DARK KNIGHT, FAST & FURIOUS 6 and JUPITER ASCENDING.

During Esquire’s BEOWULF Q&A panel for the Television Critics Association press tour, Ajala describes his character Rate as being on his own side in the clash for power. “Rate is the guy who makes up his own rules. He is his own leader. He is his own man. And he sees himself as a solution to an imminent problem. It hasn’t happened organically, whereby Rheda [played by Joanne Whalley] would become the queen and lead the Shieldlands, and he thinks that he is the suitable guy for the job. He’s fiercely ambitious, very intelligent, and has a wicked sense of humor, which is so much fun to play. It’s a fantastic character.

“I think he just messes up and mixes up the balance and the equilibrium [between the other characters] and has a fantastic time doing so. But I think I think he is, is constant with [who] he is. He’s a stand-up guy. You know where you stand with him, because he says what he means and he means what he says.”

When the panel ends, Ajala sticks around for some follow-up discussion on various aspects of his BEOWULF role, including being perhaps the first black actor to portray a Scandinavian tribal leader.

AX: Is there any discussion of how Rate’s family came to the Shieldlands, or is this just sort of like, “Let’s just start treating race like hair color, accept it and keep going”?

DAVID AJALA: Exactly. It’s not even mentioned. It’s just one of those things whereby these people are all in the lands, and the most important thing is for them to survive. So all of that [ethnic strife] goes out of the window. These guys are trying to survive. They have imminent threats, monsters, tribes, muscling in and they have to act very, very quickly.

AX: Does Rate have any alliances with either Beowulf or Slean?

AJALA: Rate is just in it to win it. He’s after the prize. He’s not interested in joining alliances, because he doesn’t feel that’s required to get what he needs to do. But that may change.

AX: A lot of English actors have some swordfight training at acting school. Did you have that, and if so, did it come in handy at all with BEOWULF, or did you just have to relearn everything?

AJALA: It really helped, because at drama school, you learn these things, and when you’re able to put them into practice, which is fantastic, you just feel like you have an arsenal to draw from. I mean, there was quite a bit to do. I think the guys will agree with me on this. One of the most important things was to be match fit [in shape for a fight] when you’re doing these sword-fighting sequences. Any fight sequence, it really does require stamina. When you get sleepy, I’m just picking myself up. I work out seven days a week. It’s just important to be super match fit. And we had to learn my fight sequences. Kieran, Ed, myself were heavily involved in many fight sequences, some that we really enjoyed and we learned from.

AX: And how is it playing opposite the CGI monsters?

AJALA: Oh, it’s so much fun. It’s like cowboys and Indians. It takes me back to my childhood of pretending to have a gun and shooting at guys. You just pretend that these things are there. It’s all make-believe.

AX: Are you originally from London?

AJALA: I am from London. I’m just gate-crashing here in the States.

AX: Have you ever done anything like this press tour before?

AJALA: This is the first time I’m doing the TCAs, and I’m really enjoying it. It’s a great atmosphere. There’s so much fantastic work that’s happening [in terms of all of the shows that are having presentations], and getting to speak to people like yourself is really cool.

AX: What would you most like people to know about BEOWULF?

AJALA: I want them to know that this is a show where we don’t only lead by the sword, but we lead by our hearts. It’s full of raw emotions, characters who are in very serious dilemmas, trying to lead a simple life in a very complicated world. It’s full of heart.