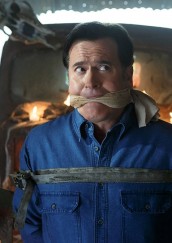 The actors discuss all the gore and more 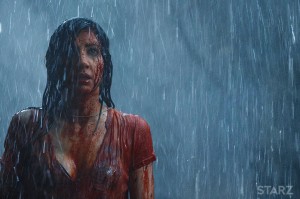 In the EVIL DEAD universe, Bruce Campbell’s antihero Ash Williams has always been more or less alone (usually because he’s accidentally managed to get everybody else killed). However, in ASH VS. EVIL DEAD, now in its second season on Starz Sunday nights, Ash has acquired two loyal companions. Pedro Simon Bolivar, played by Ray Santiago, and Kelly Maxwell, portrayed by Dana DeLorenzo, both worked with Ash at a big box store before the place got trashed by Deadites, aka the Evil Dead of the title. Now Kelly is out for vengeance against the Deadites for killing her parents, and Pablo feels he is on a quest (and is also in love with Kelly).

DeLorenzo, educated in Chicago, appeared as both Beth and Sandra the Rhino on THE LATE LATE SHOW WITH CRAIG FERGUSON. She also costarred on IMPRESS ME. Her film credits include THE MAD ONES and A VERY HAROLD & KUMAR 3D CHRISTMAS.

Native New Yorker Santiago has had arcs on DEXTER, MY NAME IS EARL, RAISING HOPE and TOUCH; he’s also been in a variety of feature films, including MEET THE FOCKERS and GIRLFIGHT.

Sitting down in a restaurant booth, the two actors alternate between being revealing and teasing each other while talking ASH VS. EVIL DEAD Season 2.

AX: When you were cast in ASH VS. EVIL DEAD, did you know whether your characters were going to survive to Season 2?

DANA DeLORENZO: You mean when we first got the job? We didn’t know if we were going to last through Season 1. And that’s kind of the beauty and the excitement of the show is that, just as the audience doesn’t know week to week, we as the cast, don’t know. So we didn’t know. No one is safe. Maybe Bruce is safe [laughs].

RAY SANTIAGO: We don’t know. But even if you do die on this show, it doesn’t necessarily mean that you’re gone. It just means that you’re dead. And on this show, it is called ASH VS. EVIL DEAD, so you could have a whole other life as a different being. But we don’t know what happens, so it kind of keeps us on our toes. And I like it.

AX: Did the two of you feel any particular honor in being the first two characters in EVIL DEAD history to survive Deadite possession?

DeLORENZO: Oh, absolutely. First of all, that was on my acting bucket list for my entire life, to play a possessed person. This season, I got to cross off the only other thing on my acting list in terms of – I can’t tell you, but I just will say it’s very exciting and I’m really looking forward for the fans to see it. But yeah, we both survived a season. Anyone who gets close to Ash dies. Well, we got close and we stayed. [laughs] And there is a lot of honor in that. And it’s just an honor being part of this franchise, and being characters that get to be the sidekicks to Ash, when the whole franchise is built on one man. So to be able to expand that world a little bit has been such an honor and so exciting to be a part of, and these fans are unlike anything I’ve ever seen. When we’re with them live, it ignites you, and so thank you fans for accepting us, and we won’t let you down this season.

AX: So you’ve done Comic-Con and now you know what it feels like to be Mick Jagger?

DeLORENZO: [laughs] Yeah, exactly. Maybe. Minus all the underwear thrown at me. I haven’t had that happen yet.

SANTIAGO: It is an honor. I haven’t even thought about the fact that we did survive possession. I survived childbirth.

AX: And having the human-skin cover of the Necronomicon stuck to your face …

SANTIAGO: Yeah, and the book cover on my face, but basically, a lot more is going to happen to both of us, to all of us, particularly Pablo. He’s still dealing with the aftermath and trauma of having Book-Face and birthing demons, and I think that you’ll see this season, through a very long, tortured journey, he may or may not find the hero within himself that he always was searching for and idolizing Ash.

AX: And if Pablo does find that hero, will he have to vomit him up?

SANTIAGO: We got a little bit more creative this year. There’s not vomit, but there are – well, not for me, I didn’t have vomit. Did I have vomit?

DeLORENZO: I’m not going tell you what you had. We can’t talk about that with a tape recorder.

SANTIAGO: But this is how serious it is, because so much has happened to us that I’m like, “Wait, did we actually do that?” It gets really insane and crazy. Oh, yeah, there was vomit. Whoops. There will be vomit.

AX: Did you have to go through a big learning curve in how to deal with the various tubes, appliances, rain gear, whatever they put on you to accommodate all of the gore or the makeup substances?

DeLORENZO: Here’s the training we got. Day One, Sam Raimi directing – takes a paint brush, takes a bucket. “Ready, and – action!” And throws the paint brush with all the blood on us. There was no, “Hey, we’re going to practice this with how it’s going to go.” No, no. There’s a cannon of blood, the cannon of blood happens and you get it on you. One time, in Episode Two of last year, when [Ash] decapitates Kelly’s mom, and Ray and I are on the ground, they had like a crank lawnmower that just kept spouting blood constantly. They don’t even tell you how to get it off, or that you cannot, in any world, get the blood or viscera off in under one shower, in under one hour. It takes days and weeks.

AX: So when they do those takes with all the fake blood, it’s essentially one take and you can’t redo it?

DeLORENZO: Oh, no. We do it more than once, unfortunately [laughs].

SANTIAGO: I think originally we were the ones learning, and figuring it out, and now, going into Season 2, and even in Season 1, towards the end, when they would come up with the small paintbrush and they would stand by, ready to flick it on us, I’d be like, “No, no, that brush isn’t going to cut it, that’s not enough blood, that brush isn’t big enough.” Because you start to learn what instruments are going to actually [work], because you understand. It’s a work of art. You understand what brush you need in order to paint the picture. It’s just so funny, because when we first got there, we were blindly being shot at. And now, I’m like, “No, no, you need a different brush.” So we know what it all encompasses.

AX: In your case, Pablo was barfing up demons, giving birth to them. This isn’t a spoiler, because it was in Season 1 – what sort of mechanism did they use so that you could enact that?

SANTIAGO: It was really disgusting, what they gave me. They gave me a weird, bizarro silicone object that I had to shove in my mouth and slowly let out. It was gross. And they make it look really great. There was also CGI stuff that happened, where you put a ring in your mouth, and then they’d swap it out, but usually, it’s great. This season and last season, a lot of times, there are things that you’re doing that you’ve never done in your life, or that you would never do, as a man, in your life. So I watched videos and pulled my references from there.

AX: Was playing being possessed what you had hoped it would be?

DeLORENZO: Absolutely. Like I said, that was a bucket list thing for me to play. Ever since I saw THE EXORCIST, I wanted to play a demon or someone possessed, which, being an Italian Catholic girl, I was trying to explain that [laughs] to the parents. I was like, “I’m so excited I get to be possessed.” And Sam actually told me that, in my screen test with Bruce, he said, “Would you be okay? This is what we’re thinking for your character this season.” And I honestly put my hands up in the air, like when you finish a race, and I just ran around the room and cheered, I was so happy. To prepare for that, I watched a lot of the films that inspired me in that sense, but then also, I wanted to bring something very specific to it, so I listened to a lot of Marilyn Manson, a lot of Wolf Mother. And I have to say, it was one of the most challenging but also rewarding things I’ve ever done. Especially those leeches. Our art department and our crew is so good that when Hemky Madera, who played Brujo, had to feed me the ball of gummy leeches, because he did have real ones on his arm, and then they had to swap the ball out in the middle of the scene, I wouldn’t open my mouth at one point, because I thought that they were real. And that’s how amazing our crew is. So it was a thrill.

SANTIAGO: As a kid, I wanted to be a vampire slayer. I used to have wooden stakes in my backpack and run around school, pretending to want to kill demons and vampires. So to get the opportunity to be possessed, be a Deadite slayer, to be groundbreaking on a franchise that broke ground, and to be part of the future of that is just a blessing and an honor every day, so when I got the opportunity to be possessed, I was ready, because I’ve been doing it ever since I was a kid.

AX: You’ve got some new cast members this season, including Lee Majors and Michelle Hurd. Did you give them any tips on how to survive EVIL DEAD-land?

DeLORENZO: Oh, we were just glad that someone else was getting tortured [laughs].

AX: What would you most like people to know about ASH VS. EVIL DEAD Season 2?

DeLORENZO: It is double the gore, double the laughs, quadruple the blood. The amount of things they turn into a liquid goo to throw on us this season, they get very creative. If I were to tease a little bit, I would say – very true, by the way – I think Ash faces the most dangerous villain in all of EVIL DEAD history.

SANTIAGO: I do feel like Season 2, in a weird way, follows each of our characters individually in a very EVIL DEAD fashion, where they’re changed forever, and the way that, particularly Pablo is going to be changed forever in the way that Ash was changed after his experience with the evil. So I’ll tease with that.

DeLORENZO: Maybe Pablo might make out, who knows? But I will say that Kelly has a lot of pent-up rage at the beginning of this season, but one mission, and that is revenge. She’s out for revenge for what happened to her and her parents, and this is a girl who’s not afraid to smoke weed out of a shotgun. You do not want to get in her way. She’s out for blood. People that are alive better stay out of her way.