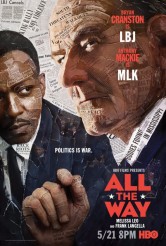 ©2016 HBO
ALL THE WAY poster
Interviews

The director talks his new HBO telefilm about LBJ 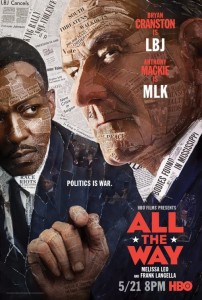 Although also known for big-screen comedies (the AUSTIN POWERS films, MEET THE PARENTS), Roach has had a very rewarding relationship doing politically-themed fare for HBO. As both director and producer, he won Emmys for RECOUNT, about the 2000 Bush vs. Gore presidential election, and GAME CHANGE, about Sarah Palin’s vice-presidential campaign. More recently, Roach produced and directed TRUMBO, which starred Cranston as real-life blacklisted Hollywood screenwriter Dalton Trumbo.

ASSIGNMENT X: When you directed TRUMBO with Bryan Cranston, did you already know you were doing ALL THE WAY with him?

JAY ROACH: No. I did TRUMBO and then, in the middle of the casting process, when we started talking with Bryan, I went to see the play ALL THE WAY. I guess [the offer to direct ALL THE WAY came] right before, when we were prepping for TRUMBO, which is a brave thing, because if TRUMBO hadn’t worked out, if Bryan and I didn’t get along, it would have been very awkward to be committed to doing ALL THE WAY as well. 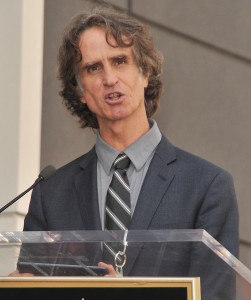 Jay Roach at the 2,507th Star for Julianne Moore on the Hollywood Walk of Fame in Category of Motion Pictures | ©2013 Sue Schneider

AX: Anthony Mackie has said he was asked to play Martin Luther King Jr. before, but this was the first time he had accepted the role …

ROACH: Making a film like this is a chance to have it be much more than a historical saga, but a moment to moment story about psychological, spiritual, emotional predicaments that people find themselves in. And Anthony was really committed to that from the beginning, so yeah, it was a wonderful collaboration. I didn’t know what to expect – I’d never met him before, and he was taking on a very challenging role, and he also has that confidence. He’s said, “People have asked me about playing King in other things, and I just never felt ready.” And I was like, “That’s a self-aware actor, saying, ‘I just didn’t feel equipped.’” He said, “Look, I don’t know if I am now, but I believe the way this script is written, that you’ve given an actor some opportunities, and it’s a really important story, and I think for the first time, I would regret it if I didn’t take on the challenge.”

AX: He’s also said that some of the other scripts he’d read did not depict Dr. King as being as strong as he is in ALL THE WAY, or as he was in life …

ROACH: This was the first time that it felt like it was a strong enough portrayal for him to take on, and I respected that, too. So again, I just think he was very thoughtful about the decision to do it – he was thoughtful enough to actually give us some ideas, and that made me feel like, “It’s going to be great, we’ll do this together.”

AX: You’re doing a lot of political projects – RECOUNT, GAME CHANGE, TRUMBO, now ALL THE WAY. Does this feel to you like your contribution to the political process, to sort of show people how it works …?

ROACH: I couldn’t make a real contribution, I wish I could find a way. I think what we [as filmmakers] do at most, at best, [is] to tell a story that holds your attention and does ask questions that will provoke conversation. I think it takes people who are actually willing to take on the process and actually go out and get involved, work for a campaign, work to solve some sort of a crisis in your neighborhood, but it’s my way of at least being part of a conversation – What is going on? Can’t we do better than this? Where are the leaders that make us feel the way we must have felt during the age of the Founding Fathers, or Abraham Lincoln, or what is going on?

AX: Do you think that storytelling about it at least gives people a framework that makes it easier for them to think about it in more coherent, concrete terms?

ROACH: One would hope so. One would hope there is some further understanding, not just kind of education, because it’s not meant to be a sort of history lesson. It’s meant to be an invitation to ask deep questions about what happened then, what did it mean, what did people care about, what mattered then, and how does it relate to what matters now. So I do hope that it at least inspires the questions. And in the best possible world, we might even inspire involvement in some way. For example, voting rights – it should be such a bipartisan, universal cause, whatever it takes to make voting [easier] – who could be against that? And our film is very much about that – those people went down to Mississippi to register people to vote and were beaten and killed – all of those kids that went down, but a whole lot of other people, then and since then, just for the right to vote. It’s heartbreaking. Having done RECOUNT, it became a cause very close to my heart of just the need to make voting as easy as it can possibly be for the sake of a democracy.

AX: When you were working with Robert Schenkkan on adapting his stage play for the screen, were there any things you discussed on making the parallels to any contemporary issues a little clearer, or does everything speak for itself?

ROACH: As I say, there are issues that are connected, but I think you have to draw your own conclusions. We don’t pretend that this film is the answer to anything today, but it’s definitely related to the questions.

AX: Given your current run of politically-based dramas, do you think you might do something a few years down the road about this year’s election, particularly the Republican primary?

ROACH: I was just saying [to another reporter], it’s difficult to imagine topping the entertainment value that is everyday politicking these days in a two-hour movie. It’s quite difficult to figure that out. But again, I think modern politics is the show. I don’t know how to top that show. It’s not necessarily a good thing that it’s become a show – in fact, I think it’s become a bad thing, the idea that it’s all about show, and winning – winning and the show, those are the two primary objectives of every political [figure]. Forget hard work and sorting out the complexity of situations going and actually talking to your constituents – how about two key minimum basic requirements for any great politician, wisdom and empathy? [laughs] Not so great for the show, or for winning, necessarily, but should be minimum basic requirements, one would think.

AX: One would hope. What would you most like people to know about ALL THE WAY?

ROACH: That it’s the story of incredible men who took on a seemingly impossible struggle for civil rights during one of the most chaotic times in history, in 1964.

This interview was conducted during HBO’s portion of the most recent Television Critics Association press tour.