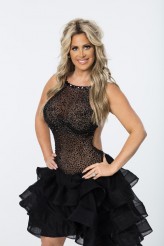 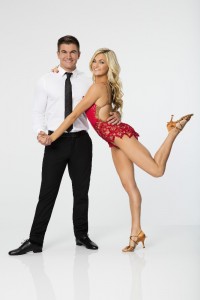 Big TV night for DANCING WITH THE STARS! The DWTS TV themed night had everything in it and then some. The drama – Kim Zolciak had a mini stroke and had to withdraw from the competition along with her partner Tony Dovolani. Comedy – Any time Gary Busey is on the dance floor. Reality TV – Nick Carter dropped a champagne glass that shattered all over the red interview room. Plenty of action also filled the ballroom as Alexa PenaVega & Mark Ballas took hold of the leader board tying for first with Nick Carter & Sharna Burgess for the number one spot with 36 points. Tamar Braxton & Val Chmerkovskiy and Alek Skarlatos & Lindsay Arnold tied for second with 33 points. Bindi Irwin & Derek Hough landed in third with 32 points, while Paula Deen & Louis van Amstel ended the night in last place with just 20 points. Stay tuned.

Hayes Grier (social media star) and his partner Emma Slater
He did well. Inaba saw he was out of breath early on. Ribeiro said he lost his energy too. Hough said his timing was right. Tonioli saw how focused he was.
Scores: Inaba – 8,  Ribeiro – 8,Tonioli – 8, Hough – 7, Harland – 8

Paula Deen (TV host) and her partner Louis van Amstel
Nicely done. Inaba said they captured the spirit in their Samba. Ribeiro said they should be proud. Hough said there were a few mishaps. Tonioli pointed out some lost footing.
Scores: Inaba – 5, Ribeiro – 5,Tonioli – 5, Hough – 5,  Harland – 6

Gary Busey (actor)  and his partner Anna Trebunskaya
Not much there. Inaba called their Tango a dysfunctional treat. Tonioli said there was some newfound elegance to his dancing. Ribeiro liked how he stayed in character. Hough saw great improvement.
Scores: Inaba – 6, Ribeiro – 7, Tonioli – 6, Hough – 6, Harland – 6

Andy Grammer (singer) and his partner Allison Holker
Heavy footed. Inaba said he was too much in his head. Ribeiro told him to bring up his posture. Hough said he went with it in his Quickstep. Tonioli told him to work on his precision.
Scores: Inaba – 7, Ribeiro – 7, Tonioli – 7, Hough – 8,Harland – 7

Who went home: Kim Zolciak & Tony Dovolani had to withdraw from the competition.
Who Has Legs To Take Home The Mirror Ball: Bindi, Nick, Alek or Tamar