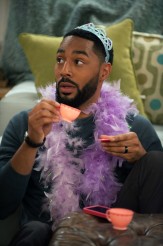 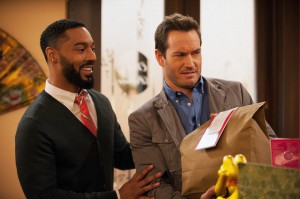 In NBC’s freshman half-hour comedy TRUTH BE TOLD, Fridays at 8:30 PM, Tone Bell stars as Russell, married to Angie (Bresha Webb) and best friends with next-door neighbor Mitch (Mark-Paul Gosselaar), who’s married to Tracy (Vanessa Lachey). Russell is black, Mitch is white, and a lot of their interaction revolves around what it’s okay to say privately or publicly – or ever – regarding race and other potentially provocative issues.

Bell is a stand-up comic, originally from Atlanta, who has previously had series regular gigs on WHITNEY and BAD JUDGE. He has a special on Comedy Central and has just been cast in a recurring role on THE FLASH. Meanwhile, Bell is happy to be one of the leading men on TRUTH BE TOLD.

TONE BELL: This has been a nice evolution and rise in career.

AX: How are you timing working on TRUTH BE TOLD with your stand-up comedy? Are you suspending the stand-up while you’re taping the show?

BELL: No, I just finished my half-hour special on Comedy Central, and we’re already talking an hour. Luckily, I stockpiled a lot of material. I’m only getting on stage maybe two or three nights a week, but we [tried] to block-shoot things out to hopefully allow me to stay on stage and keep that funny up and what’s going to be nice is, we’ll see Russell [as a character] on stage in the show. So there will be times when you’ll see a story from Mitch and Russell turn into something that he puts on stage. In real life, it’ll be exactly what I do day to day.

BELL: I am a stand-up first and I always let the actors set their characters first, because I always identify as a comic first, actor second. So I let the actors figure out what they want to do in a scene and then I work around [them], unless I have to own the scene, more so for me and not just the comedic beats, then I will take that pressure on, but normally I let them do what they want to do, and then I will work around and they’ll see the jokes that I want to I guess protrude out of the scene.

AX: How is it playing opposite Mark-Paul Gosselaar?

BELL: He and I are so opposite, we learn so much from each other – there’s no fun in hanging out or working with somebody exactly like you. You learn nothing. [Gosselaar is] someone who has been in Hollywood forever, grew up here since he was a young teen, maybe even younger – I mean, this is all he knows. And I’m for the most part brand-new to Hollywood, so we have different perspectives, different lives. He has four kids, I have no kids, he’s been married twice, I’ve been married none, he knows Hollywood like the back of his hand, I’m still getting my feet wet. So we have some great stories. I’ve got some great stories from living in Dallas, living in Atlanta, living in Miami, New Orleans, San Francisco, and he’s mostly been in L.A. and New York. So he shoots a movie here and there, but there’s a wealth of knowledge to be gained from both of us.

BELL: Luckily, my costar is somebody I do know very well, and it comes across. Bresha actually has a boyfriend in real life she’s been with for awhile, and he and I are really good friends. We hang out so much, and I’ve had long-term girlfriends, so being with a friend, it’s way easier to be comfortable with her, and I’m glad Bresha Webb is who I get to work with, because we are so comfortable around each other. She knows that if I take a liberty, it’s for the show, it’s for the scene, it’s not because I’m hitting on her. I think for my character, to play married – I’m in my thirties now. It’s comfortable. It’s actually very comfortable. It’s enlightening. You can actually see into what a married guy thinks when [series creator DJ Nash] writes it on paper. Maybe it’s a good lesson for me.

The weirdest part is having to wear a ring. I’m having to wear a ring all day. I go to lunch, take a bathroom break, I leave the ring on – it does itch, I’m not going to lie to you. But playing married – hopefully now that I’m getting back to dating, that whoever I take on next knows that I’m ready.

AX: Meaghan Rath played Mitch’s wife Tracy in the pilot, but in the series, Vanessa Lachey plays Tracy. Do you know what happened there?

BELL: Meaghan was in second position for our show, and her first-position show also got picked up. It’s not like it’s off-season, it’s the same time of year to premiere, and unfortunately, you just can’t do both. Meaghan was great, but we love Vanessa – Vanessa really rounded out our cast.

AX: And do you have any other projects besides the Comedy Central specials that we should know about?

BELL: I’m still developing with FX right now on a couple of things. I have a development deal with NBC to do my own thing with them that I do not have to star in, but I’ll be doing that soon, and I’ll be on the road [doing stand-up].

This interview was conducted during NBC’s portion of the most recent Television Critics Association press tour.