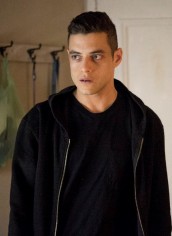 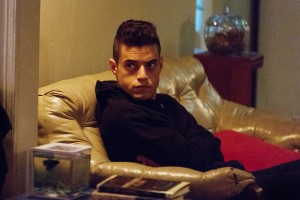 Malek, a native of Los Angeles, had his first onscreen role in THE GILMORE GIRLS. Since then, he’s been in series including THE WAR AT HOME, 24 and THE PACIFIC, and features including LARRY CROWNE, NEED FOR SPEED, OLDBOY and SHORT TERM 12, as well as the NIGHT AT THE MUSEUM and TWILIGHT franchises.

Created by Sam Esmail, MR. ROBOT won the Audience Award at the 2015 SXSW Film Festival, and has since gained a reputation for being unlike anything else on television (or elsewhere). At a party thrown by NBC/Universal, USA’s parent company, for the Television Critics Association at Spago in Beverly Hills, Malek talks about what it’s like to be part of a singular enterprise.

AX:  When you started on MR. ROBOT, did you have any idea it was going to be a phenomenon, or is this a pleasant surprise?

RAMI MALEK: I knew we had our hands on something special, and if we were able to live up to what was written on the page, then we could achieve something that was unique. Did I think it was going to be transformative? I hoped that it would come close to doing something in that respect, and I’m just glad that it’s being appreciated in the way that it has been.

I wanted people to see it, because I already felt like it was going to be different. That’s it. I just wanted people to get their hands on it. But now when they do, when it’s such a huge thing, now I want them to tell their friends about it. I just think it has the ability to transcend art in a way.

AX: Do you think that MR. ROBOT may allow more TV shows to do something really different?

MALEK: I’ve already discovered that – I hear from people at Syfy [another NBC/Universal network] today that they’re taking more risks after watching our show and seeing how we’ve pushed things to the edge, and I’m happy about that. I think TV is a special ground for what can be done these days, and actors are gravitating towards that, and I’m glad the TV studios are pushing the limits as well.

AX: Elliot has trouble connecting with other people. Do you think come Season 2 that he’s going to get more connected or less connected with selected other individuals?

MALEK: I’m still trying to wrap my head around Season 1 and I think when you see where Elliot ends up at the end of Episode Ten, there might be the ability for all of us to reflect in some way about his future.

AX: Has MR. ROBOT caused you to see anything differently, or think of things in a different way?

MALEK: It’s allowed me to think about the effect that a television show can have on society. It can be pleasurable learning. It can be as engaging as a TV show, as entertainment, as it can be as a voice about our place in society and our ability to alter that place.

MALEK: It’s a lot of fun. There are some very dark places we all go to on this show, and I think the only way to climb out of those places is by finding some levity. So in between takes in our darkest moments, we’re trying to joke around. We’re trying at the end of the day to enjoy our show and realize, as much as we’re creating something that is telling us this really enthralling, thrilling story, we’ve come together as artists to enjoy ourselves, to play.

MALEK: You will know about them soon, but I haven’t closed the deal on the paperwork, but everything is very exciting, and I can say that MR. ROBOT is opening a lot of doors for me as an actor.