The Scoop on ASH VS. EVIL DEAD 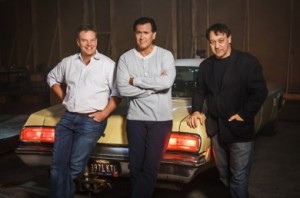 When best friends director/writer Sam Raimi, producer Robert G. Tapert and actor Bruce Campbell made the short film WITHIN THE WOODS in their native Michigan, they were hoping to make the feature that became 1981’s THE EVIL DEAD. They didn’t realize they were launching a horror franchise that would spawn 1987’s EVIL DEAD II and 1992’s ARMY OF DARKNESS, plus a 2013 remake. They were expecting even less that, in 2015, they’d all be working on the television series ASH VS. EVIL DEAD, which will premiere on Starz later this year.

The three men, who have all enjoyed enormous success both individually and in collaboration over the intervening years, are all executive producers on ASH. Campbell stars, reprising his role as Ashley “Ash” J. Williams, experienced if not exactly responsible battler of the deadly Deadites, and Raimi is directing the opening episode.

Here’s what was revealed in a group conference call with Campbell, Raimi and Tapert:

ASH VS. EVIL DEAD picks up thirty years after we last saw Ash. The Deadites have been dormant, but that all changes quickly and, as always, it’s Ash’s fault.

The series will come in thirty-minute episodes, as ten of these still constitute more screen time than the first three films combined. Lucy Lawless and Jill Marie Jones are two of Campbell’s costars. Viewers can expect the same combination of scares, gore and laughter that were provided by the feature films.

Production is happening in New Zealand, as that’s where Tapert and Raimi have shot many of the series they’ve produced, including HERCULES: THE LEGENDARY JOURNEYS, XENA: WARRIOR PRINCESS and four seasons of SPARTACUS for Starz.

This last, Raimi explains, is why Starz is the network where EVIL DEAD has found a home. “Rob Tapert had a great relationship with Starz. [Starz CEO] Chris Albrecht, with the success that they had mutually shared on SPARTACUS for many years, had been wanting to work together  [with Tapert]. Then when my brother Ivan and I were writing EVIL DEAD the TV show, we actually didn’t think anybody would be interested, it was such a weird idea. But Chris Albrecht stood up and said, ‘I want to make this show.’ He had a great relationship with Rob, he enjoyed the EVIL DEAD series and I don’t want to speak for Chris, but I have the feeling that he wanted to give the audience something unique, and something they could only get on Starz. And he told us that this really fit the bill and I hope that we can deliver that for him.”

Campbell adds, “There were in fact other companies that were interested, other outlets, and so as the creative team, we had to decide which company is going to give us what we need to do this particular show – not just any show, this particular show. THE EVIL DEAD functions best in an unrestricted world, and Starz was just really heads above anybody else in what they were able to offer us creatively. Sam is a very creative director and works best with the fewest restraints possible. And so we were able to give the viewers what they demand through Starz, and only through Starz. And so I believe Starz is the only place where this could have gone.”

Much as he loves Ash, Campbell says if Raimi and Tapert weren’t involved in ASH VS. EVIL DEAD, “I wouldn’t have approached it with a ten-foot pole. Sam is our fearless leader, and all these movies have sprung from his great brain. Sam’s the best director I’ve ever worked with. Him being involved was mandatory, and we’ll get him as long as we can get him, we’ll get him as often as we can get him and the other directors are just going to have to suck it up and try and chase after what he’s going to deliver in this pilot, which we’ve been shooting. And I’m going to be in touch with Sam even on the episodes he’s not directing, because I’ve never been directed by anyone else as this character. So thank God he’s doing the pilot so we can get reacquainted with the approach to this character.”

Raimi is modest in the face of his friend’s praise. “Bruce is being very kind, but the truth is, in directing Bruce as Ash, my only job was in recognizing, growing up with Bruce, throughout all these forty-some years, all his lowest, weakest, most cowardly, brashest loudmouthed moments and reminding him who he really is.”

Raimi and Campbell share a laugh at this, before Raimi continues. “And then Bruce says, ‘That’s right, I know who I am.’ And the funniest thing is, he is Ash and my job is to remind him, and he doesn’t need that much reminding, is the scary part. And the truth is, he’s got the heroic side to him just as much. So he’s got it all. And sometimes he pulls upon his best parts and sometimes he pulls upon his weakest parts, and that’s what his performance really is, is getting in touch with himself in this fantastic world. It’s a very funny process, working with Bruce. He makes me laugh my head off, because – maybe because I know him so well – he’s not afraid to show me the worst parts of himself, and when he does that, I really feel like we’ve got Ash nailed. And I think you know where it’s headed, I don’t want to spoil the climax of the first episode, but he’s also going to have pull upon the best parts of himself. I’ll tell you in a later interview if he’s still got that part.”

Campbell laughs again and counters, “It remains to be seen.”

TV Review: BEAUTY AND THE BEAST - Season 2 - "Hothead"
CD Reviews: THE BLUE MAX: THE LIMITED EDITION and THE LIST OF ADRIAN M...
Blu-ray Review: TALES FROM THE CRYPT / VAULT OF HORROR Double Feature
THE EXORCIST: Alan Ruck on new Fox series and chats FERRIS BUELLER - I...