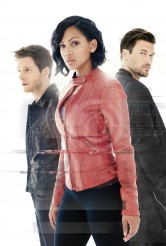 The executive producer talks his futuristic thriller on Fox 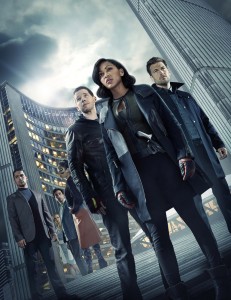 In Fox Networks’s new series MINORITY REPORT, Mondays at 9 PM, it’s 2065, eleven years after the events in the 2002 film directed by Steven Spielberg from Philip K. Dick’s science fiction short story. The “precogs” who had been held in isolation, forced to serve the Precrime division of law enforcement with their visions of crimes not yet committed, have been freed. The cops of Washington, D.C. are back to solving murders the old-fashioned way, after they’ve happened.

The three precogs we met in the film are now eleven years older. Agatha (Laura Regan) still believes in keeping separate from the normal world. Her younger brother Arthur (Nick Zano), however, is a bit of a troublemaker. As for Arthur’s fraternal twin Dash (Stark Sands), he’s so disturbed by his continuing visions of impending murders that he eventually makes contact with police detective Lara Vega (Meagan Good).

MINORITY REPORT executive producer/show runner Max Borenstein developed the series based on both Dick’s original work and the film adaptation, which was scripted by Scott Frank and Jon Cohen. Borenstein works mainly in features – he wrote 2014’s GODZILLA and his script for KONG: SKULL ISLAND is in pre-production – but he sounds very happy about his TV gig.

ASSIGNMENT X: Originally, Dash and Arthur were going to be identical twins, played by the same actor. Why did that change?

MAX BORENSTEIN: When you make the pilot, if you’re lucky enough to get picked up to series, it’s really an opportunity to start to dig in with the writers and see where the show is really going. And we had always envisioned the Arthur role as one that was a little smaller, and so it was one that could be played by [the same actor playing Dash] from a production standpoint. And then, as we fleshed out who Arthur was, and his differences from Dash, and how much of a role we really wanted him to play in the series going forward, it became clear from the creative standpoint that it made sense to have two very different, distinct actors playing those roles, and also, from a production standpoint, one has eight, maybe nine days to make an episode, and if one actor is playing two lead roles, you’re in deep water.

AX: Stark Sands, who plays Dash, has a real-life twin brother. Did you think about approaching him to play Arthur?

BORENSTEIN: Not an actor. And they’re fraternal twins – he lives somewhere in the Midwest and he’s a family man and he’s not a Broadway or a Hollywood star like Stark. But it’s really cool. When I found out that he had a twin brother, and he told that story to Kevin and me when we were in the audition process, already we felt like he was kind of the kismet actor for it, but that just kind of put it over the top.

AX: Did making them fraternal instead of identical twins change the storytelling much?

BORENSTEIN: It’s not a huge shift. Really, the question was when we were going to roll out Arthur, and I’m a first-time television creator, and coming from a feature world, [at first] it seemed like, “What a great idea to have one actor play two gigantic roles.” And then, like I say, when the role got bigger and I started to realize what we actually worked with in terms of time per episode, it started to become very clear that, as appealing as that ORPHAN BLACK model was in our imagination, that [having two actors playing fraternal twins] made sense. And again, from a creative standpoint, as we really began, it was less about retooling, to be honest, than it was about getting in the room and saying, “Who’s Arthur?” and starting with the kernel that we had and saying, “If we’re going to do that, it’s so cool, we’ve got to incorporate that into the pilot.” And we had only a little bit of Arthur at the end of the pilot initially, and we felt like, “You know what, this is such a rich character, and we want our audience to know what that central dynamic is from an early point.” So we went back and very organically slotted him in.

AX: Did you have to jettison anything where one brother was using the resemblance to the other to fool people?

BORENSTEIN: No. The only thing that I jettisoned in that regard was an early, early idea I had where I imagined it would be cool to open an episode before having ever met Arthur, thinking that it was Dash and then revealing that it was Arthur. But that was a lame idea anyway. So we didn’t have to jettison that.

AX: You had mentioned that Arthur may be out for revenge. Does this have anything to do with whoever decided to essentially imprison him and his siblings when they were children?

BORENSTEIN: Well, certainly that’s a slow burn element in terms of the specifics of the people who did it. Arthur has a very different perspective [than his siblings] because of the difference in his power. Dash gets these visceral, visual fragments, and they have an emotional impact [on him], having to see people die. And that’s the reason why he can’t go off and live on an island and he can’t exploit it, because that’s traumatic to him. And so it’s created the man who is, despite all of that, optimistic about the ability to help people, who wants to help people.

Arthur, on the other hand, gets the factual half of the equation, the names and bits of information come to him in this way that’s detached, which allows him to not have that same emotional reaction to all of this, so he can process it the way that you might process news from around the world and go, “Oh, that sucks,” but not necessary emotionally feel it in the same way. And so, as a result of that, he’s more Machiavellian. He’s more manipulative. He’s resentful of the people who did this on a very, very deep level. And above all, which is really where are story is going to be going in the long arc of our season, rather protective about making sure this never happens again, because if anyone finds out where the precogs are, they are going to be exploited. And if you think about, if you had three people who had that gift and could see the future, is putting them to work for the Metropolitan Police Department the most effective thing you could possibly do? And the answer is probably “no,” and so we are going along those lines.

AX: Can you talk about deciding to make your primary cop a woman and the precog a man versus the film version, where Tom Cruise played the detective and Samantha Morton was the main precog?

BORENSTEIN: It really was driven by the character and the decision to focus on the precogs and to focus on the twins, Arthur and Dashiel. And once we made that decision, I knew that we wanted to have a strong female lead, and so that was going to be our cop.

AX: The pilot has a lot of characters using gestures without touching computer screens to access graphics that appear to them, and us, as holograms. Will that run through the series?

BORENSTEIN: The gestural interface is how they use their [technology] in the police department to a certain extent. We’ve also incorporated micro-gestures – I don’t know if you’ve seen, recently, Google revealed they’ve developed this very cool technology in part of I think their X program, which is basically like using radar within your watch or any device. It reads your hands at such a micro level that you can make [a gesture] almost like rolling a tiny filament between your fingers. It could be a volume knob. And it knows what you’re doing and that I think is the way that things are going now, because our machines are reading our bodies and so our characters don’t even need to touch the screens. In the film, they had to wear gloves with white dots. Now, we can do that without that. And so we’ve adapted there as well.

AX: Where are you shooting MINORITY REPORT?

AX: The show seems so ambitious in technical terms that it seems like it would be hard to deliver on time on a weekly basis …

BORENSTEIN: Well, it’s certainly ambitious and exciting. The reason that you haven’t seen the pilot is not because we haven’t finished it on time and on budget, because like I said, we’re doing a few additional photography things to weave it into the longer serial arc, including Arthur, of the first season. But to be honest, technology has advanced so much that, while [MINORITY REPORT] is always, like any show, a big challenge time-wise, there are episodes that we’ll be turning over a week before airdate lock-in to our effects company [CoSA VFX], and granted, they’ll have ulcers, but they will do it. It’s an ambitious show; at the same time, we are to be cognizant of budgets and wanting to do things that we do well, so we limit ourselves to things that we can do well. And so we’ll have a big scope shot, we’ll do a really cool chase, we’ll try not to waste the money on things that are not as exciting, like ordinary screens. So it’s all a balancing act and one of the crazy things about television. But the fact that it’s possible is nuts.

AX: Are the motivations of the criminals or the crimes themselves going to have an element of futurism in them?

BORENSTEIN: Yes, they will, but one thing we want to do is keep it grounded and relatable in that aspect, and we are not taking the tack that every crime has to have a sci-fi component, in the sense of someone who can change their face. Let’s say we’re taking an episode that’s going to be about genetic engineering in this world. We’ll deal with that, but rather than creating a monster of the week, we’re really trying to focus on an element of the future of a week, a theme of the week. What’s the science of dating? What’s the world of politics like? What is medicine like? What is psychotherapy like when we can tinker with the brain in interesting ways? So rather than creating a kind of monster of the week, in terms of technology gone wrong, it’s going to be about the small ways that technology impacts us on kind of a profound level, but how the technology goes wrong.

This interview was conducted at Fox Network’s presentation for the Television Critics Association summer press tour at the Beverly Hilton Hotel.