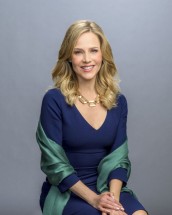 The actress also chats about Season 3 of DEFIANCE 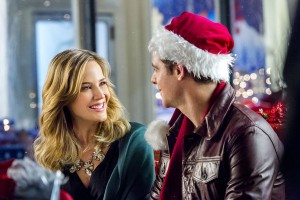 Actress Julie Benz tends to be known for her work in darker, grittier fare, from her big-screen debut in TWO EVIL EYES to her series regular gig as a cop on ROSWELL to her crucial recurring role as the vampire Darla on BUFFY THE VAMPIRE SLAYER and ANGEL to the doomed Rita Morgan on DEXTER and the morally grounded mayor/madam Amanda Rosewater on three seasons of Syfy’s DEFIANCE.

However, Benz’s softer side is on view in the new Hallmark holiday movie CHARMING CHRISTMAS, which has its next airing Thursday, November 12 at 8 PM. Benz plays Meredith Rossman, a business woman who plays Mrs. Santa for her family’s department store.

AX: Is CHARMING CHRISTMAS a charmed Christmas in the magical sense, or simply charming?

AX: Are you playing the source of the magic?

BENZ: No, I’m the recipient of the magic.

AX: Is there a romantic aspect to the story?

AX: It sounds like this may be one of your less running-jumping-stabbing-biting roles …

AX: You’ve done a lot of action over the years. Were you looking for a break from that?

BENZ: This came at a time when I was just finishing up DEFIANCE, and I like to keep myself versatile as an actor, and I like to stretch different muscles, and it was the right fit. I literally wrapped DEFIANCE on a Tuesday and started shooting the movie on a Wednesday. And it was the right move to get all that – when your day job is saving the world from aliens and other bad s***, it’s nice to be able to jump into something where life is less stressful, where I can have a little more fun at work [laughs].

AX: And also not be staring at quite so much green screen as is involved in DEFIANCE.

BENZ: Yes, and other actors in massive amounts of makeup. It was really refreshing, because it reminded me how simple acting is, because it’s just a very sweet Christmas movie. There is no green screen, there is no action, there’s no running, jumping or biting. It’s just about the work and about the spirit and it was just really lovely to be able to shift gears in a different manner and get back to the simplicity of what I like to do, which is act.

AX: Have you worked for Hallmark before?

BENZ: I have. Obviously, I like it. I keep coming back [laughs].

AX: Is there a through-line as far as how Hallmark deals with actors, or is it different from production to production?

BENZ: They’re very lovely in the way they deal with actors. I think the scripts are really good. I like being able to do projects where I know my whole family can sit down and watch it and enjoy it and get something from it. I mean, right now, I have a body of work that my nephews can’t watch, so it’s nice to be able – and where I can trust that my in-laws can sit down and watch it and I don’t have to be cringing and embarrassed by certain scenes. So it’s nice to come back and do the good, wholesome family fare. I like doing that.

AX: Did you enjoy doing Season 3 of DEFIANCE? Amanda went through a few changes.

BENZ: Yes, it’s been a great journey for Amanda, quite a roller-coaster ride for her. And I think this season we see an Amanda who’s a little more fed up. She’s just not taking anybody’s s*** any more. She’s pulling the trigger – she’s trigger-happy this season, which is great to finally see. I was a little frustrated with her moral code for awhile there, so it’s great to see her finally take some action, and to exact some revenge.

AX: And what would you most like people to know about CHARMING CHRISTMAS?

BENZ: Everyone can sit down and watch it, and they’ll get into the Christmas spirit.

This interview was conducted at Hallmark Network’s party for the Television Critics Association summer press tour.