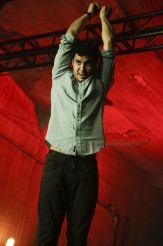 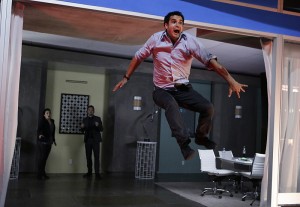 On Season 2 of CBS’ SCORPION, Mondays at 9 PM, Walter O’Brien and his team of geniuses – plus their “normal” friend Paige (Katharine McPhee) and FBI liaison Cabe Gallo (Robert Patrick) – continue to tackle unusual crimes that require some brilliance to solve.

There is a real Walter O’Brien, who is one of SCORPION’s executive producers, but on the show, he’s played by English actor Elyes Gabel. Gabel (his first name is pronounced ELL-ee-as, surname is Gah-BELL) has been part of ensemble casts before – on TV in CASUALTY, GAME OF THRONES and BODY OF PROOF and in films including WORLD WAR Z and A MOST VIOLENT YEAR – but Walter O’Brien in SCORPION is his first full-fledged starring role.

AX:  Now that you’ve done a full season of it, is being No. 1 on the call sheet what you thought it was going to be?

ELYES GABEL: You never know what it’s going to be like, so I’ve really enjoyed it. It’s been a new adventure. Working without your [expectations] is always really interesting, because you don’t know what things going to be until you’ve experienced them. But it’s definitely been character-building in a really interesting way for my own. I perceive it to be a really good environment to be in to be the lead of a show. We’ve just got a great bunch of people working with us.

AX: Walter is supposed to be really out of touch with emotions, but he obviously has them. How do you balance those two aspects of his character?

GABEL: What’s interesting about that is that I always saw Walter as a guy who really did have an infinite access to his emotions. It’s just his ability to modulate them [that’s a problem]. Because once you decide you’re not going to use your emotions and you decide something else is optimum, then – we all feel emotions. You’re not going to fool an audience into not thinking that you’re a human being [laughs]. That’s ridiculous. It’s just I think the way that people present themselves. I feel that that’s the most interesting way to explore a character like that.

AX: Most characters are meant to be conspicuously emotional people. And Walter is not. So how is playing him different from playing other people, in that sense?

GABEL: Well, it’s not like giving away how I start a character off, but I always think, what is the character about, how does the character feel? There are obstacles in any storyline. The thing about a TV show is, it carries on going, so your obstacles constantly change, right? But I feel like the guy – if there’s no obstacle and nothing in the way from somebody getting what they want, then a lot of the time, you lose the interest in the arc, because people want to see a story. They want to see a hero, or a bunch of heroes, and then the trouble that they’re experiencing in getting what they want. Because if they don’t experience any trouble, first of all, there’s no conflict, there’s no resistance. That’s a lot of time where you get those punchy, interesting stories. So I always saw him as somebody who had a huge access [to his emotions], a huge vault, but he didn’t know how to get it out. And if you see the show, when it comes through, it’s just very difficult to go anywhere else with his emotions. That’s when he really comes out. Because he can’t escape. And I found that very interesting and I found it to be a way to let me into the character without doing him a disservice.

AX: Do you continue to communicate with the real Walter O’Brien about what you’re doing?

GABEL: Yes. He’s so good at staying in contact. We’ve created a fictional character, but he’s a hybrid fiction character, because it’s his name, it’s a lot to do with his life. It’s just the real human interest is based on emotions and constructing these really interesting, engaging characters. So he’s been very good about the creative license that the producers, the writers, the actors have taken, because he knows it’s for the best.

AX: You can’t give out Season 2 spoilers, but do you have a favorite episode/scene/stunt that you got to do in Season 1?

GABEL: It’s difficult, because looking back on episodes is very different. I enjoyed the spy episode [“Charades”], where we ended up getting in the airplane at the end, because there was some flirting – I think it had a really nice cocktail of fun, danger, action, and nice comedy as well. I’d say that was possibly one of my favorite episodes. I really liked the penultimate episode [of Season 1,“Cliffhanger”].

AX: Is that the episode where Walter and Cabe have a falling-out because Walter learns that the drones he invented were used by the military to spray deadly chemicals?

GABEL: Yes. One of our resident directors, Sam Hill, directed that episode, and I think we’re just kind of really trying to get a nice tone for the show and see how you can really mine it and you can really I suppose plumb certain scenes and make it about the people. I think that did a really good job. I’ve enjoyed getting really emotional, but also the levity as well, so it’s like a cocktail of both of those things, to create the perfect storm, really.

AX: In Season 2, will Walter continue to deal with his guilt about making those drones?

GABEL: I don’t really know, but I think it will always be at the root of what happens, because this is the reason why he started the company [Scorpion]. His hacker name is Scorpion, and then, through being betrayed, he sought people who were also being betrayed and who were isolated. And that [having his invention used in that way] was the biggest betrayal. He in essence is responsible for the deaths of about two thousand people, so I don’t think he can resolve that within 23-odd episodes. I think it’s going to definitely have a hangover. How strong a part that plays is still left up for grabs, I think.

AX: Walter got so upset at the end of that episode that he got into an accident in his sports car and spent a lot of the Season 1 finale hanging off a cliff in his vehicle. Did the production actually strap you into something and tilt you, or did they just tilt the camera?

GABEL: Well, the show has so many moving parts, and a lot of them are different departments that do a fantastic job of making the story come to life. From the photography, the camera guys, to the art design, we have incredible people that really make it look like we really are doing what we’re doing. And often, we’re not in those precarious situations. So I was on stage that day for a bunch of days when I was in the car. They had what’s called a jib [a big mechanical arm that attaches to the car], so they angled the car so it’s between vertical and horizontal, but we’re on a mechanism that is allowing it to shift and get all those great shots, and then they shoot these big landscape shots for the other actors. So I definitely did experience inconvenience of the discomfort, but I think that adds to you trying to make it look real.

AX: So you actually were fighting gravity somewhat …

GABEL: Yeah. They didn’t shoot it completely horizontally – they jib it.

AX: Did SCORPION ever require you to do anything where you thought, honestly, how am I going to do this physically?

GABEL: I love the physical component to being an actor, because you’re often expressing yourself in working your mental muscles out. But I love getting in there and doing something like, I like running in the show or doing exercise, because you don’t always get to do that when you’re playing somebody who’s predominantly a tech-savvy human.

AX: You also have a lot of highly technical dialogue as Walter. Do you figure out, “All right, what am I actually saying here?” or do you learn it phonetically, or how do you handle that?

GABEL: You just run through it, keep running through it, hoping you don’t forget it, hoping you don’t fluff it [laughs]. The mind’s such a funny thing, though, isn’t it? The more you prep it and the more you get a muscle working, the more it’ll just say, “Hey, mate, I’m with you.” So you get working and you start to learn your lines maybe three days and just go over them again and again and again, then you work out the intention, because the intention sometimes helps you. It’s fun.

AX: Series creator Nick Santora and his fellow show runner Nicholas Wootton have said that the whole SCORPION cast is very talented musically. Have you done any jam sessions with each other?

GABEL: Yeah, we’ve got a couple of nice choirs, we’ve had a couple of nice screeches, a couple of toe-tappers. I think we all really like to play music. I like to play guitar and sing, Katharine is an exceptional singer, she made a fantastic career out of it, Ari [Stidham, who plays Sylvester]  plays and sings. Jadyn [Wong, who plays Happy] actually is a little dark horse, because she’s a classically trained pianist and she plays really, really well. And Robert yells out Johnny Cash tunes every now and again.

AX: Are we liable to see this or hear this anywhere?

GABEL: In reality, yeah. In the second world of our universe, you’re not likely to see it, but we definitely do all get out there. I’m sure if you ask the Nicks, they’d tell you that we get a lot of singing, a lot of joking, a lot of fun and frolics. It’s quite fun.

AX: Any other projects that you’ve got that we should know about?

GABEL: Well, I have this movie that came out [MI-5]. I’m going to try to focus on a little bit of writing. I’d like to direct something in the future, but that’s all not set yet, and the music.

AX: Could you direct an episode of SCORPION?

GABEL: You know, the thing about this show is that it’s such a complicated mechanism, it’s a complete beast of a show. I’d love to at one point direct something. Those are all real lovely things to think about. Any opportunity that comes around to do that, I would love to.

AX: And what would you most like people to know about SCORPION Season 2?

GABEL: Just keep watching, because we’re going to try our best to keep you entertained and keep you interested in the characters. It’s unlike anything I’ve ever been a part of, really, as an integral character. And [to the SCORPION fans], thank you very much for your support. The support of these guys who watch the show, it’s been a new experience for me. It’s very humbling.

This interview was conducted at a CBS press event at the London Hotel in West Hollywood.